PARADISE, Calif. — President Donald Trump headed to Northern California on Saturday to see firsthand the grief and devastation from the deadliest U.S. wildfire in a century amid confusion over how many people remain unaccounted for.

Authorities confirmed a new death toll of 71 and say they are trying to locate 1,011 people, even as they stressed that not all are believed missing.

California’s outgoing and incoming governors, both Democrats and vocal critics of Trump, planned to join the president Saturday. Gov. Jerry Brown and Gov.-elect Gavin Newsom welcomed Trump’s visit, declaring it’s time “to pull together for the people of California.”

The blaze that started Nov. 8 largely destroyed the town of Paradise, population 27,000, and heavily damaged the nearby communities of Magalia and Concow. It destroyed more than 9,800 homes and at its height displaced 52,000 people.

Trump was expected to land Saturday morning at Beale Air Force Base just north of Sacramento and said he plans to meet with Brown and Newsom and first responders.

This patch of California, a former Gold Rush region in the Sierra Nevada foothills, is to some extent Trump country. He beat Hillary Clinton by 4 percentage points in Butte County in 2016.

But Trump has stirred resentment among survivors over comments he made two days after the disaster on Twitter, then reiterated on the eve of his visit.

In an interview taped Friday and scheduled for broadcast on “Fox News Sunday,” Trump said he was surprised to see images of firefighters removing dried brush near a fire, adding, “This should have been all raked out.”

Asked if he thought climate change contributed to the fires, he said, “Maybe it contributes a little bit. The big problem we have is management.”

Those comments echoed his initial reaction to the fires Nov. 10 when he blamed the wildfires on poor forest management and threatened then to withhold federal payments. Trump subsequently approved a federal disaster declaration.

“If you insult people, then you go visit them, how do you think you’re going to be accepted? You’re not going to have a parade,” Maggie Crowder of Magalia said this week outside an informal shelter at a Walmart store in Chico.

But Stacy Lazzarino, who voted for Trump, said it would be good for the president to see the devastation up close: “I think by maybe seeing it he’s going to be like ‘Oh, my goodness,’ and it might start opening people’s eyes.” 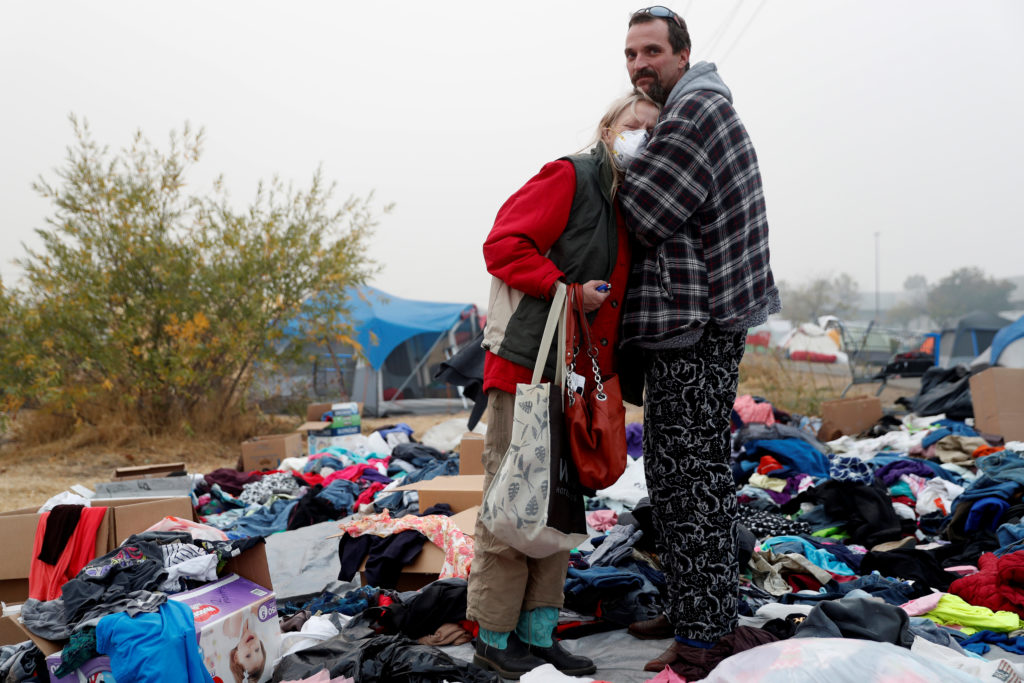 Travis Lee Hogan, of Paradise, comforts his mother, Bridgett Hogan, while they stay at a makeshift evacuation center for people displaced by the Camp Fire in Chico, California, U.S., November 15, 2018. Photo by Terray Sylvester/ Reuters

Firefighters returning to a command center in the neighboring city of Chico after a 24-hour shift Friday were reluctant to weigh in on Trump’s visit, but some shared their thoughts.

Nick Shawkey, a state fire captain from rural Northern California, said Trump’s visit was the mark of a good leader. But to imply the state was to blame for mismanaging the forests was based on a misunderstanding because much of the forest land in California is controlled by the U.S. Forest Service, he said.

“The thing he’s tweeting about is his property,” Shawkey said.

Paul Briones, a firefighter from Bakersfield, predicted Trump’s visit would be a huge boost to the community, showing “that this on a national level is a priority.”

More than 5,500 fire personnel were battling the blaze that covered 228 square miles (590 square kilometers) and was halfway contained, officials said.

Firefighters were racing against time with a red flag warning issued for Saturday night into Sunday, including winds up to 50 mph and low humidity. Rain was forecast for midweek, which could help firefighters but also complicate the challenging search for remains.

“It’s a disheartening situation,” Butte County Sheriff Kory Honea told a news conference Friday. “As much as I wish we could get through this before the rains come, I don’t know if that’s possible.”

The number of people unaccounted for grew to more than 1,000 on Friday. But Honea acknowledged the list was “dynamic” and could easily contain duplicate names and unreliable spellings of names.

The roster probably includes some who fled the blaze and do not realize they have been reported missing, he said.

“We are still receiving calls. We’re still reviewing emails,” Honea said. “This is a massive undertaking. We have hundreds and hundreds of people working on this.” 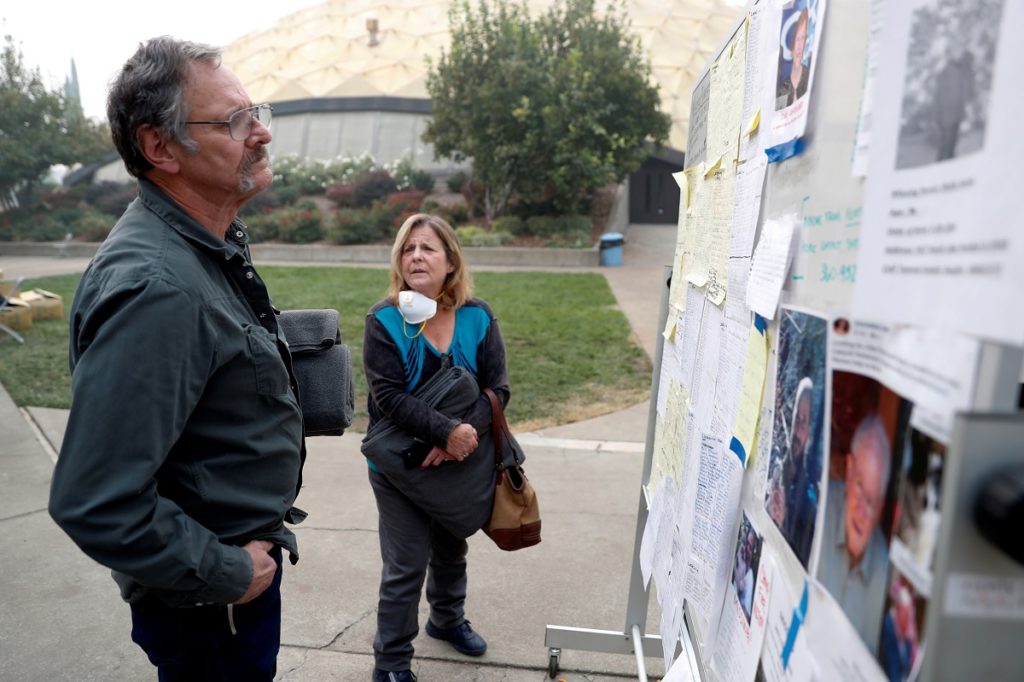 Lane and Julie Walker, of Magalia, look for people they know on a list of people missing in the aftermath of the Camp Fire in Chico, California, U.S., November 15, 2018. Photo by Terray Sylvester/ Reuters

Families searching for loved ones have scoured shelters and social media and say they understand the chaos of the situation, But the wait for information is agonizing.

For one family, good news arrived by telephone.

Monica Whipple said Friday that she was boarding a plane back to North Carolina from Northern California when she got a call two days ago that her mother, Donna Price, had been found alive. Price had been presumed missing but was tracked down at a shelter.

“It was so crazy, I started crying in front of everybody,” Whipple said. “She’s doing OK.”

For too many others, the wait to learn a loved one’s fate has ended with bad news.

Sol Bechtold searched for his 75-year-old mother, Caddy, posting flyers of her on bulletin boards and searching for her in shelters.

On Thursday, Bechtold went to the Butte County Sheriff to provide DNA samples. As he was driving back to his home in Pleasanton, California, he got a call from an officer with the coroner’s unit of the Sonoma County Sheriff’s Office and was told his mother’s remains were found in her home in the community of Magalia. The home had burned down to its concrete foundation.

“It’s hard to realize your mother is gone,” Bechtold said.

“It’s been a pretty emotional 24 hours. Lots of tears,” he said.

Left: U.S. President Donald Trump walks out from the White House in Washington, U.S., before his departure to California, November 17, 2018. Photo by Yuri Gripas/Reuters