Trump and first lady Melania Trump arrived by motorcade at Broward Health North Hospital to pay their respects to doctors, nurses and others who responded to the shooting in nearby Parkland. They planned to meet with law enforcement officials at the Broward County Sheriff’s office later Friday.

The president tweeted earlier that he would meet with people “whose lives have been totally shattered.”

Trump also tweeted Friday that he was “working with Congress on many fronts,” though he offered no details.

Some of the parents, survivors and others affected by the tragedy at Marjory Stoneman Douglas High School have angrily called for firm action to prevent future assaults.

“I don’t want Trump to come but we want more gun safety,” said 18-year-old Kevin Trejos, a senior at the school. “It’s a dream. It hasn’t hit me yet.”

The president made the trip to meet with first responders shortly after Air Force One arrived in West Palm Beach for the president to spend the weekend at his Palm Beach estate, which is about 40 miles from Parkland.

More than 1,000 people attended a candlelight vigil Thursday night near the school, and at one point some began chanting, “No more gun! No more guns!”

READ MORE: The 17 victims of the Florida high school shooting

Lori Alhadeff’s 14-year-old daughter Alyssa was killed and invoked the president’s 11-year-old son, Barron, as she angrily called for help.

“President Trump, Barron goes to school. Let’s protect Barron. And let’s also protect all these other kids,” she said Friday on CNN, her voice raising to a shout. “You need to help us, now. We need security now for all these children. We need action, action, action!”

Trump, who frequently boasts about his support for the National Rifle Association, made no mention of gun violence or any new measure to restrict access to firearms during remarks Thursday about the shooting. He did promise to tackle school safety and “the difficult issue of mental health.”

He also tweeted Friday that he was “working with Congress on many fronts,” though he offered no details. 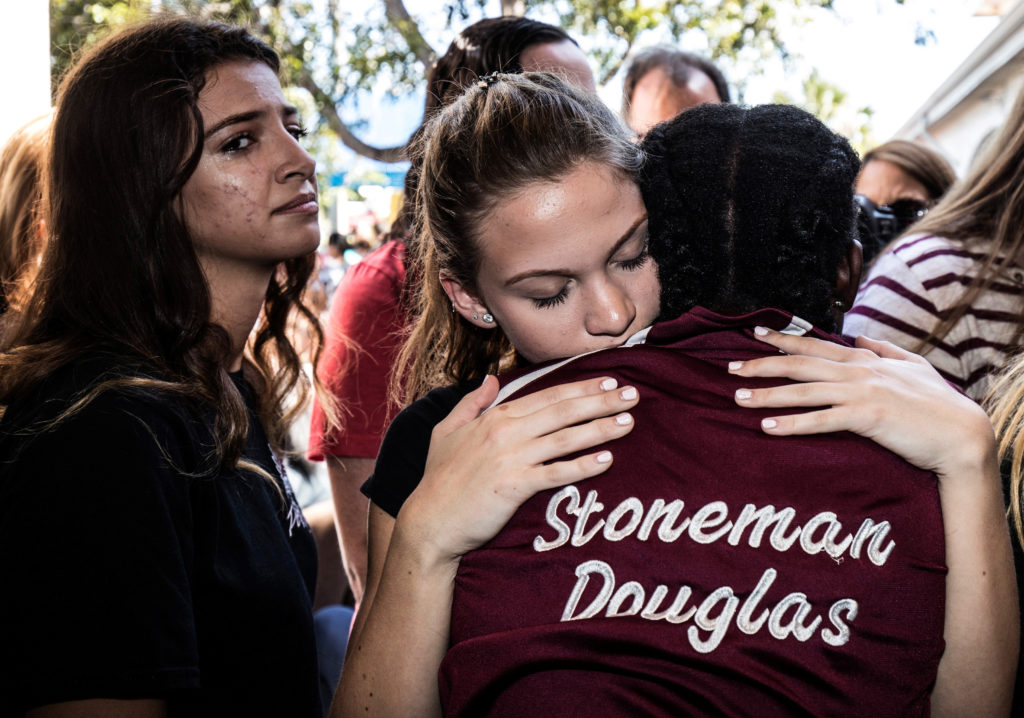 But his latest budget request would slash Medicaid, the major source of federal funding for treating mental health problems, and cut school safety programs by more than a third. Last year, he signed a resolution blocking an Obama-era rule designed to keep guns out of the hands of certain mentally disabled people.

In a departure from the Trumps’ original schedule, Mrs. Trump arrived at Air Force One separately from her husband for the flight to Florida and boarded the plane while reporters were kept away. A spokeswoman said the change was due to scheduling.

Trump ignored shouted questions from journalists as he departed about a report in The New Yorker magazine that he had affair in 2006 with a Playboy model.

Police said the 19-year-old suspect in Florida, Nikolas Cruz, opened fire with an AR-15 rifle, killing 17 people and injuring 14 more. Investigators described him as a troubled teenager who posted disturbing material on social media and had been expelled from the high school for “disciplinary reasons,” Broward County, Florida, Sheriff Scott Israel said.

The shooting was the nation’s deadliest at a school since a gunman attacked an elementary school in Newtown, Connecticut, more than five years ago.

Before he was a candidate, Trump at one point favored some tighter gun regulations. But he embraced gun rights as a candidate, and the NRA spent $30 million in support of his campaign.

Before he was a candidate, Trump at one point favored some tighter gun regulations. But he embraced gun rights as a candidate, and the NRA spent $30 million in support of his campaign.

During his brief televised statement, Trump said he wanted to work to “create a culture in our country that embraces the dignity of life,” a phrase likely to resonate with his conservative base.

He pledged to work with state and local officials to “help secure our schools and tackle the difficult issue of mental health,” adding that safe schools would be a key focus when he meets with governors and state attorneys general later this month.

Trump made no specific policy recommendations, and he did not answer shouted questions about guns as he exited the room.

In reacting to previous mass shootings, Trump has largely focused on mental health as a cause, dismissing questions about gun control. After a shooting at a Texas church in November left more than two dozen dead, the president said, “This isn’t a guns situation.”