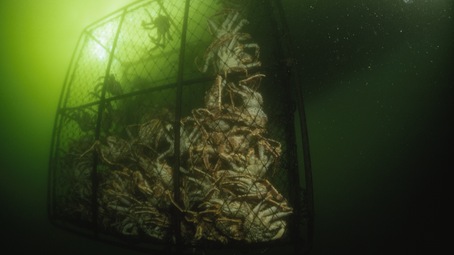 Climate change and its effects are the subject of this week’s #NewsHourChats. On Thursday, from 1 to 2 p.m., EDT, on the @NewsHour Twitter account we’ll discuss the things we risk losing due to the climate change, the potential benefits, how climate change is affecting you, if at all, and what, if anything, can be done to reduce the effects of climate change.
Join the conversation by following @NewsHour on Twitter and tweeting using the #NewsHourChats or by watching online at the end of this post.
On Monday, we aired “Sea Change: The Pacific’s Perilous Turn Threatens Alaskan Crabs and The Seattle Times, that looked at new research that suggests ocean acidification caused by carbon-dioxide emissions may be changing the chemistry of the North Pacific, raising concerns about the future of fishing.
Tuesday’s segment, “Ice Melt Exposes New Routes and New Dangers,” explored what more water from melting sea ice means for commerce and marine safety.
Wednesday on the broadcast we aired “Melting Ice, Warming Waters Threaten Traditional Ways of Life,” which looks at what rising temperatures mean for the Inupiat people of Barrow, Alaska.
You can catch up on the latest in our climate change coverage by visiting Coping With Climate Change.