Looking at Friday’s jobs report, it’s easy to think that the economy’s finally made it; this is no longer a jobless recovery. The economy added 248,000 jobs in September, and job gains during the summer were revised upward by nearly 70,000. The unemployment rate declined to 5.9 percent, slipping below the 6 percent threshold for the first time since the summer of 2008, before the financial collapse.

Our Solman Scale “U7,” which adds to the officially unemployed part-timers looking for full-time work and “discouraged” workers — everyone who didn’t look for a job in the past week but says they want one — also crossed a significant threshold this month, dipping below 14 percent to 13.93 percent — its lowest since we introduced the number in 2011. 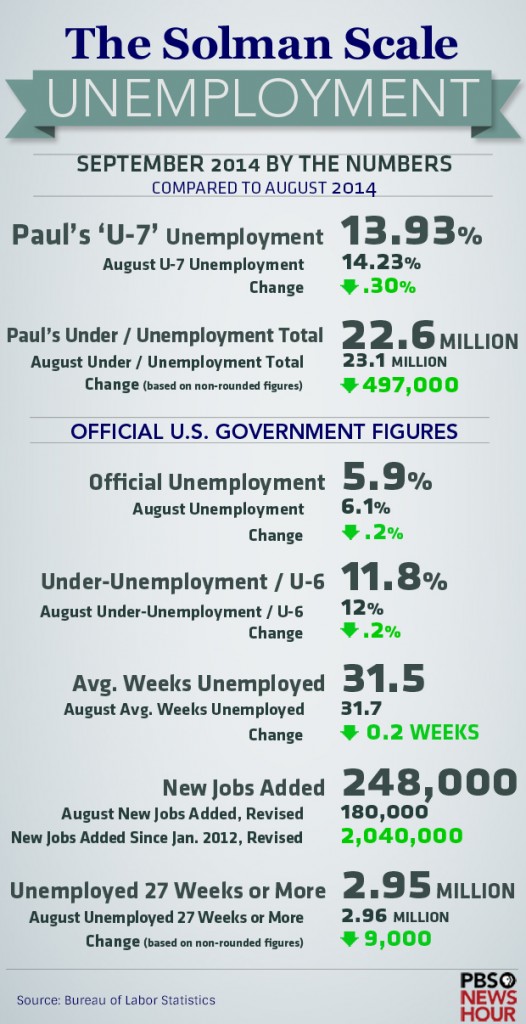 There’s a certain optimism that comes with crossing these thresholds. But for most economists, the truest evidence of a long-term sustained recovery would be in consistent job gains from the so-called “establishment survey” of employers. And on that front too, the economy appeared to swell. September’s strong gains suggested that August’s weak 142,000-new-jobs number was some kind of blip. (And indeed, the number has now been revised up to 180,000.) Over the past 12 months, each month has added 213,000 jobs, on average.

In the economic debate between cyclical and structural theories of unemployment, this month’s numbers look like a win for the cyclicalists — those who see the labor market going through cyclical ups and downs. In other words, what goes up (i.e., unemployment), will eventually go down as the economy recovers. Structuralists would point to no change in the number of long-term unemployed this month — still at nearly 3 million — as evidence that deep structural changes in the nature of work are keeping workers idle.

And beneath Friday’s headline numbers, there’s another aspect of the structural story at play, — one we’ve long discussed on Making Sen$e: a two-tiered economic recovery that’s great for some folks and “meh,” if not downright miserable, for others.

The first downer observation concerns the unemployment rate. Yes, it’s fallen over a percent from where it was a year ago. But between August and September, 315,000 more people were not in the labor force. As we’ve pointed out before, baby boomers hitting retirement age are a big part of this decline in the workforce; their departure is to be expected.

But baby boomers may be only half the story. As Georgetown’s Harry Holzer told us last month, many of the people no longer in the workforce are prime-age workers nowhere near retirement. They’re giving up the hunt for a job, presumably, because they’re too discouraged by what’s out there. The real economic fear is that they won’t return to the labor force soon, if ever.

The number of people not counted in the workforce who say they want a job has also increased by 45,000 for the second month in a row. That may not sound like much, but in September, the BLS reports, 6,349,000 people “not in the labor force” wanted a job — no different from the 6,348,000 people who said the same thing in January.

The Bureau of Labor Statistics acknowledged this disparate recovery in its own jobs summary Friday when it pointed to the unemployment rates for blacks and teens, at 11 percent and 20 percent, respectively. Those numbers hardly budged between this month and last.

Moreover, average wages grew not at all. In fact, they declined by a penny an hour. That startling fact, however — startling in that wages would have to rise just to keep pace with inflation — masks the underlying reality that has characterized this economy for so many years: the gap between the top and the bottom.

Professional and business services, for example, added 81,000 jobs in September — that’s roughly a third of all payroll gains for the month. And average hourly earnings in that sector increased — from $29.29 to $29.31. Those working in “information” had a much better month: their average weekly earnings increased by 45 cents, a 1.3 percent increase in just one month. Employees of the financial services sector also saw a healthy hourly bump of 10 cents over last month.

September was dismal, though, for the wages of workers in manufacturing, education and health services, all of which saw declines in their average hourly earnings. A little arithmetic drives home just how much that could hurt. Manufacturers’ average hourly earnings declined by 8 cents between August and September. If that decline were sustained for 12 months, that’d be an hourly loss of 96 cents over the year — roughly a 4 percent annual decline in income. Add the double whammy of inflation rising at 1.5 percent a year, and you’ve got factory workers losing 5.5 percent a year in real wages, were hourly earnings to keep declining at September’s rate.

Bottom line: two-tiered report, two-tiered economy. But evidence of a real economic recovery, with jobs, that would be hard to dispute.