In a milestone for religious freedom and against employment discrimination, a federal court of appeals granted a preliminary injunction last month that requires the Marine Corps to immediately allow two Sikh Americans to enlist and begin basic training without shaving their heads and beards, while also allowing them to wear turbans, patkas, and other religious articles that their faith requires.

“Our own military and militaries around the world know well that Sikhs with turbans, beards, and other articles of faith are capable of honorable and distinguished military service,” Brian W. Song, partner at BakerHostetler and counsel for plaintiff Jaskirat Singh, said in a statement. “This injunction should be a wake up call for the U.S. Marine Corps to recognize that fact as well – especially as our Armed Forces move towards becoming more diverse, more inclusive, and more representative of the America they protect.”

Aekash Singh, Jaskirat Singh and Milaap Singh Chahal were accepted into the Marine Corps as recruits but were denied a religious accommodation. This ruling allows Chahal and Jaskirat Singh to immediately begin their recruit training with their articles of faith intact. Because Aekash Singh has since decided to attend officer candidate school instead of recruit training, the Court of Appeals ordered his case to be reconsidered by the U.S. District Court for the District of Columbia in light of this ruling.

A fourth plaintiff, Capt. Sukhbir Singh Toor, had to cut his hair and shave his beard when he went through recruit training, but he was later granted limited religious accommodation in 2021. The Marine Corps allowed him to maintain unshorn hair, but forbade him from wearing a turban whenever “forward deployed,” “assigned to lead an artillery unit or fire support team,” or serving in “ceremonial roles.” The Marine Corps also allowed him to maintain his beard, but only when neither deployed nor “subject to deployment on short notice.” Toor feels that the accommodation was so restrictive as to practically be a denial. 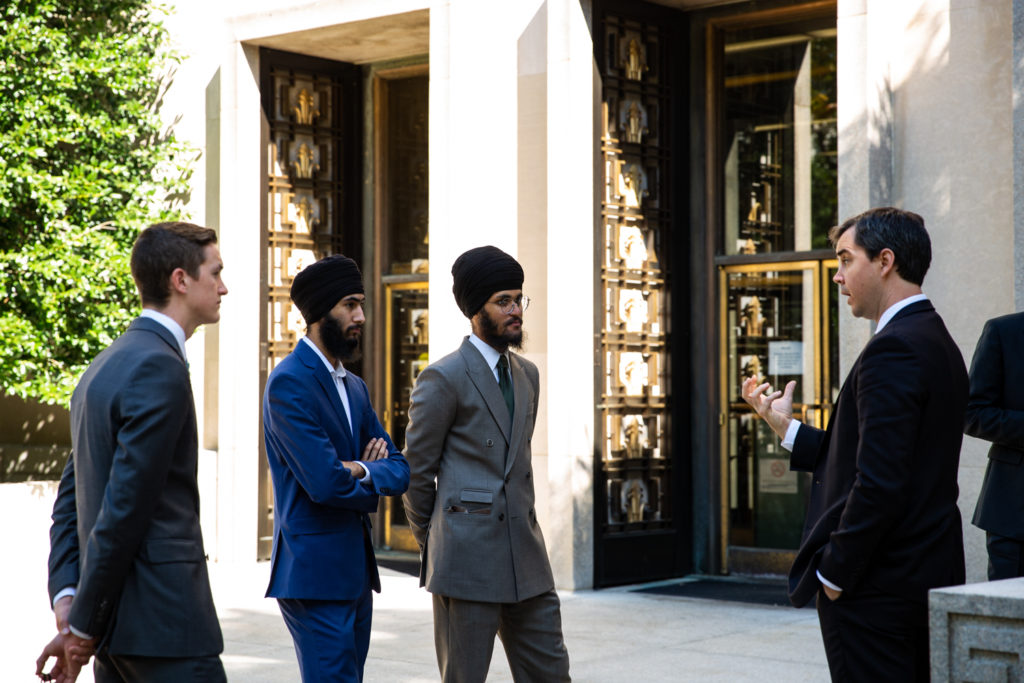 U.S. Marine Corps recruits Jaskirat Singh, Milaap Singh Chahal, with attorney Daniel Blomberg at D.C. Circuit Court, October 11, 2022. They are seeking religious accommodation that will allow them and other Sikh Americans to practice their faith while attending basic training in the Marine Corps. Photo courtesy of Becket Fund for Religious Liberty.

The second part of the lawsuit, which has not been addressed yet, seeks less restrictive religious accommodation after basic training for Toor and the three recruits. The Marine Corps has committed to allowing the three recruits to wear unshorn hair, neatly tied beards, turbans or patkas, and a religious steel bracelet after basic training, except “when receiving hostile fire pay or imminent danger pay,” or when a battalion or squadron commander determines that “operational necessity” requires a suspension.

All the other U.S. military branches, as well as some law enforcement agencies, already allow Sikh Americans to serve with their articles of faith intact.

Circuit Judge Patricia Millett wrote in the opinion for Singh v Berger that although the Marine Corps had argued it had a compelling interest in developing unit cohesion, stripping away individuality and encouraging a team-oriented mindset during the 13-week recruit training, the Marine Corps failed to meet its burden of proof for denying these Sikh American plaintiffs. Millett wrote that the Marine Corps already offers similar accommodations for non-religious reasons, such as allowing beards for people with a medical condition called pseudofolliculitis barbae – more commonly known as razor bumps – that makes shaving painful; allowing longer hair and different hairstyles for women; and allowing bodily tattoos. Millett wrote that the Marine Corps also failed to explain how religious beards would interfere with fitness and why less restrictive alternatives – as required by the 1993 Religious Freedom Restoration Act – would not work, especially when other branches of the military are able to accommodate Sikh Americans.

READ MORE: How violence against Asian Americans has grown and how to stop it, according to activists

“Today’s injunction is a step forward in the direction of other recent policy changes in the U.S. Army and U.S. Air Force that have allowed more than 100 Sikhs to serve with their articles of faith,” Amandeep S. Sidhu of Winston & Strawn LLP, one of the four law firms representing the plaintiffs, said in a statement. “Now, we must look towards a comprehensive policy change in the U.S. Marine Corps that will make full equality of opportunity in that branch a reality for all Americans, regardless of their faith tradition.” 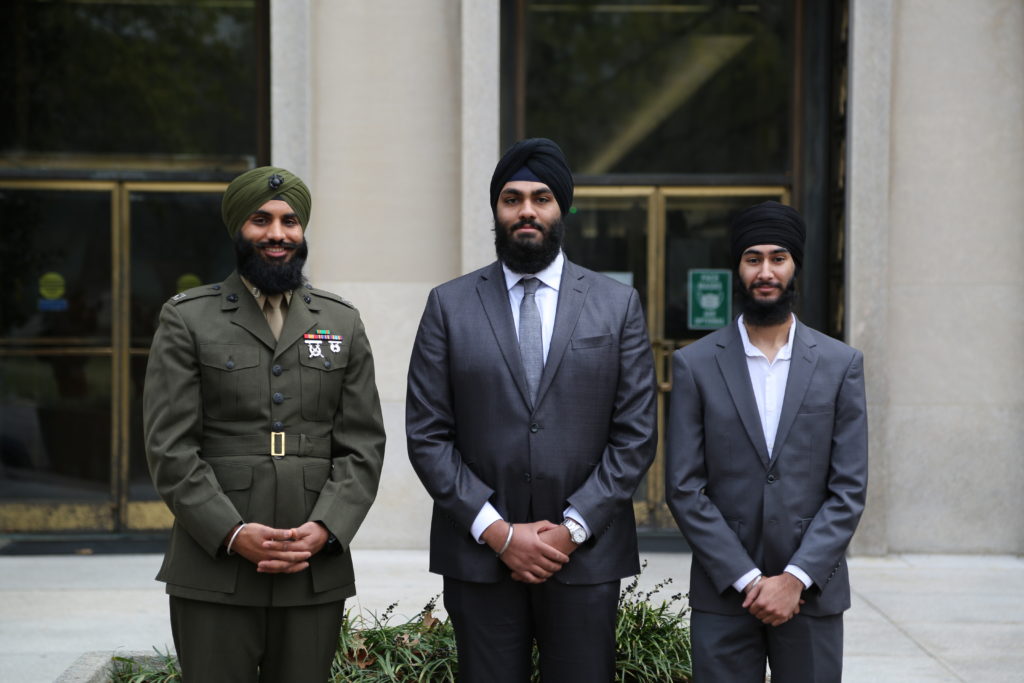 Capt. Sukhbir Singh Toor and recruits Aekash Singh and Jaskirat Singh (L-R) are seeking religious accommodation that will allow them and other Sikh Americans to practice their faith while serving in the Marine Corps. District of Columbia Circuit Court, November 29, 2022. Photo courtesy of Becket Fund for Religious Liberty.

Sikh Americans have a long history stretching back to at least World War I of being allowed to serve in the U.S. military with their articles of faith intact. The Marine Corps allowed beards from 1775 to 1976. After 1981, stricter grooming regulations across the U.S. Armed Forces limited religious expression and banned Sikh articles of faith and required requests for religious accommodation on a case-by-case basis.

Sikhism is the world’s fifth-largest religion and Sikhs have been living in the United States for more than 125 years, according to The Sikh Coalition. Part of the Sikh faith requires Sikhs to defend the defenseless and for both men and women to never shave or cut their hair to honor what God has given them and for Sikh men to wrap their hair in a turban to represent an outward commitment to their faith.

READ MORE: ‘You don’t teach prejudice by discussing its existence.’ How to talk to children about race and discrimination.

The District of Columbia Court of Appeals divided the case into two phases, so this ruling only addresses whether the three recruits could attend basic training with their articles of faith intact, and there is more to come.

“We are currently in a 90-day discovery period on that specific issue with depositions and legal briefings ongoing, which will come to an end in early February,” Amrith Kaur Aakre, Sikh Coalition Legal Director, told the PBS NewsHour. “After that concludes, a schedule will be set for the second phase of the case, which involves the career-limiting and insufficient accommodation that Capt. Toor is subject to, and which our pre-accession clients will have once they graduate from recruit training.”

Aakre said they are “also still waiting to hear whether the Marine Corps will appeal.”

Left: Capt. Sukhbir Singh Toor is seeking less restrictive religious accommodation so that he and other Sikh Americans can practice their faith while serving as an active duty U.S. Marine Corps officer on deployment. Palm Springs, Calif., October 18, 2021. Photographer Mark Abramson. Courtesy of The Sikh Coalition.