The remains of hundreds of unaccounted-for Pearl Harbor service members will be exhumed and analyzed for identification, following a broadening of U.S. military disinterment policy announced by the Department of Defense earlier this week.

Sixty-one caskets containing the commingled remains of up to 388 sailors and Marines will be taken from the National Memorial Cemetery of the Pacific – also known as the Punchbowl – and sent to a laboratory in Hawaii in three to six weeks’ time, according to the DOD.

“Amazingly, the Deputy Secretary of Defense Robert Work just made the decision, hey, you know what, the right thing to do is to exhume these people if we can identify them and return them to the relatives,” Tom Gray told one of the hosts of Canadian Broadcasting Corporation’s “As it Happens” on Friday.

Gray’s second cousin, Edwin Hopkins, was among the 429 who perished when the USS Oklahoma capsized after being struck by Japanese torpedoes during surprise attacks on the Pearl Harbor naval base the morning of Dec. 7, 1941.

In 2008, Gray’s family found out that Hopkins’ remains, along with those of 26 other service members had been identified in 1943, but those identifications were overturned, WNPR reported in 2014. The information was uncovered thanks to research by Pearl Harbor survivor, Ray Emory.

Since then, Hopkins’ relatives have gone “back and forth with the Navy” as Gray put it on the CBC show, to see that the remains are exhumed and positively identified in order to bury them in the family’s plot at a cemetery in Keene, New Hampshire. 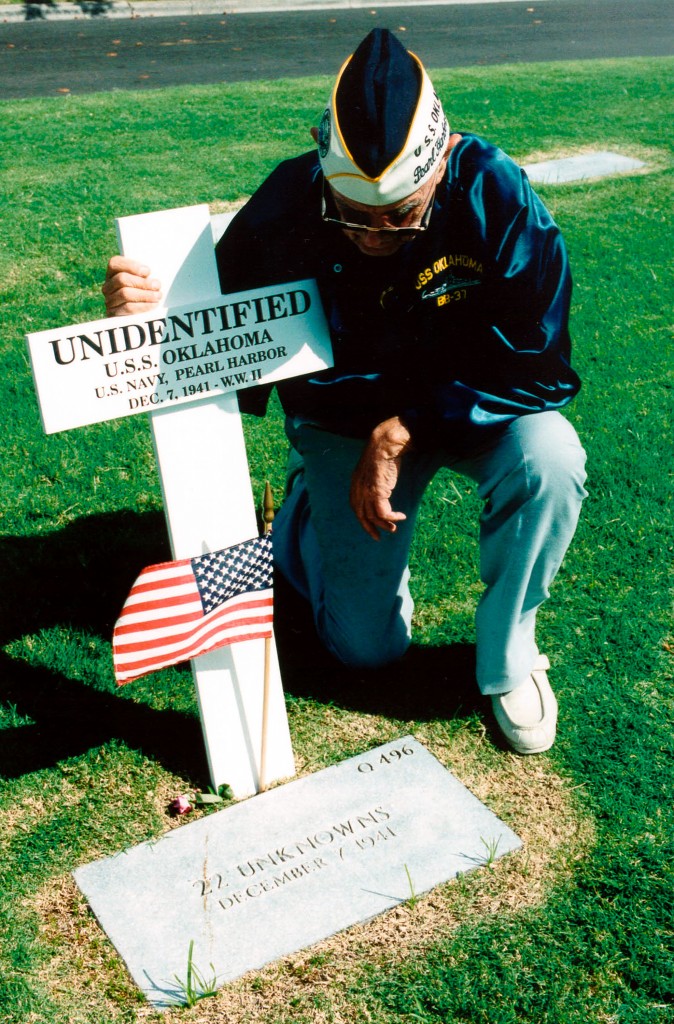 Paul Goody, a veteran of the Japanese assault on Pearl Harbor who served on the USS Oklahoma, remembers all the dead not counted for during the 60th Anniversary of the attack on Pearl Harbor on Dec. 7, 2001 in Honolulu, Hawaii. Credit: Charles Gabrean/Getty Images

According to the new terms concerning unidentified remains, there must be a 60 percent chance that remains sharing a casket can be individually identified in order to remove them.

The DOD has collected and analyzed DNA from 84 percent of family members of USS Oklahoma victims, as well as obtained 90 percent of the medical records for the crew that died aboard the vessel.

It will take an estimated five years to complete the identifications, using current forensic and DNA testing technology.

Left: A Photograph of rescue teams on the capsized hill of USS Oklahoma seeking crew members during the attack of Pearl Harbor on Dec. 7, 1941. Credit: Fotosearch/Getty Images