WASHINGTON — Antonin Scalia, the influential conservative and most provocative member of the Supreme Court, has died, leaving the high court without its conservative majority and setting up an ideological confrontation over his successor in the maelstrom of a presidential election year. Scalia was 79.

Scalia was found dead Saturday morning at private residence in the Big Bend area of West Texas, after he’d gone to his room the night before and did not appear for breakfast, said Donna Sellers, speaking for the U.S. Marshals Service in Washington. The cause of death was not immediately known. A gray hearse was seen at the entrance to the Cibolo Creek Ranch, near Shafter, on Saturday accompanied by an SUV.

President Barack Obama made clear Saturday night he would nominate a successor to Scalia, despite calls from Republicans to leave that choice – and the certain political struggle over it – to the next president. He promised to do so “in due time” while paying tribute to Scalia as “one of the towering legal figures of our time.”

Scalia’s death most immediately means that that the justices could be split 4-4 in cases going to the heart of the some of the most divisive issues in the nation – over abortion, affirmative action, immigration policy and more.

Scalia was part of a 5-4 conservative majority – with one of the five, Anthony Kennedy, sometimes voting with liberals on the court. In a tie vote, the lower court opinion prevails.

Senate Majority Leader Mitch McConnell, as well as Republican presidential candidates Ted Cruz and Marco Rubio, said the nomination should fall to the next president.

Democrats were outraged at that idea, with Sen. Harry Reid, the chamber’s top Democrat, saying it would be “unprecedented in recent history” for the court to have a vacancy for a year.

Leaders in both parties were likely to use the high court vacancy to implore voters to nominate candidates with the best chance of winning in the November general election.

Scalia used his keen intellect and missionary zeal in an unyielding attempt to move the court farther to the right after his 1986 selection by President Ronald Reagan. He also advocated tirelessly in favor of originalism, the method of constitutional interpretation that looks to the meaning of words and concepts as they were understood by the Founding Fathers.

Scalia’s impact on the court was muted by his seeming disregard for moderating his views to help build consensus, although he was held in deep affection by his ideological opposites Ruth Bader Ginsburg and Elena Kagan. Scalia and Ginsburg shared a love of opera. He persuaded Kagan to join him on hunting trips.

Quick-witted and loquacious, Scalia was among the most persistent, frequent and quotable interrogators of the lawyers who appeared before the court.

His 2008 opinion for the court in favor of gun rights drew heavily on the history of the Second Amendment and was his crowning moment on the bench.

He could be a strong supporter of privacy in cases involving police searches and defendants’ rights. Indeed, Scalia often said he should be the “poster child” for the criminal defense bar.

But he also voted consistently to let states outlaw abortions, to allow a closer relationship between government and religion, to permit executions and to limit lawsuits.

He was in the court’s majority in the 2000 Bush v. Gore decision, which effectively decided the presidential election for Republican George W. Bush. “Get over it,” Scalia would famously say at speaking engagements in the ensuing years whenever the topic arose.

Bush later named one of Scalia’s sons, Eugene, to an administration job, but the Senate refused to confirm him. Eugene Scalia served as the Labor Department solicitor temporarily in a recess appointment.

A smoker of cigarettes and pipes, Scalia enjoyed baseball, poker, hunting and the piano. He was an enthusiastic singer at court Christmas parties and other musical gatherings, and once appeared on stage with Ginsburg as a Washington Opera extra.

Ginsburg once said that Scalia was “an absolutely charming man, and he can make even the most sober judge laugh.” She said that she urged her friend to tone down his dissenting opinions “because he’ll be more effective if he is not so polemical. I’m not always successful.”

He could be unsparing even with his allies. In 2007, Scalia sided with Chief Justice John Roberts in a decision that gave corporations and labor unions wide latitude to air political ads close to elections. Yet Scalia was upset that the new chief justice’s opinion did not explicitly overturn an earlier decision. “This faux judicial restraint is judicial obfuscation,” Scalia said. 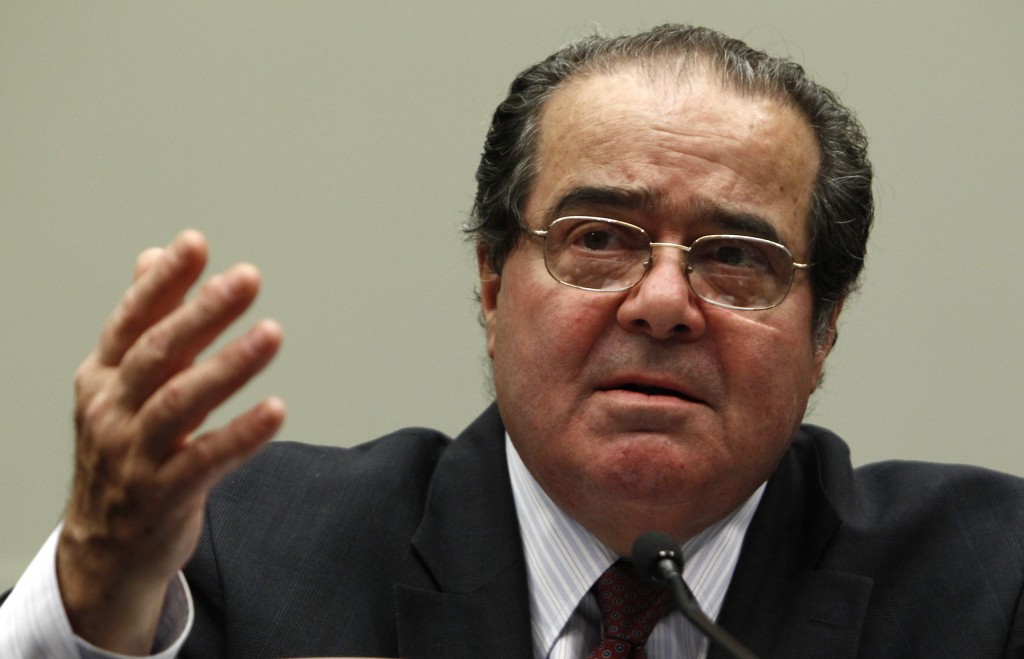 Quick-witted and loquacious, Scalia was among the most persistent, frequent and quotable interrogators of the lawyers who appeared before the court.

During Scalia’s first argument session as a court member, Justice Lewis F. Powell leaned over and asked a colleague, “Do you think he knows that the rest of us are here?”

Scalia’s writing seemed irrepressible and entertaining much of the time. But it also could be confrontational. It was a mocking Scalia who in 1993 criticized a decades-old test used by the court to decide whether laws or government policies violated the constitutionally required separation of church and state.

“Like some ghoul in a late-night horror movie that repeatedly sits up in its grave and shuffles abroad, after being repeatedly killed and buried, (the test) stalks our … jurisprudence once again, frightening the little children and school attorneys,” he wrote.

Scalia showed a deep commitment to originalism, which he later began calling textualism. Judges had a duty to give the same meaning to the Constitution and laws as they had when they were written. Otherwise, he said disparagingly, judges could decide that “the Constitution means exactly what I think it ought to mean.”

A challenge to a Washington, D.C., gun ban gave Scalia the opportunity to display his devotion to textualism. In a 5-4 decision that split the court’s conservatives and liberals, Scalia wrote that an examination of English and colonial history made it exceedingly clear that the Second Amendment protected Americans’ right to have guns, at the very least in their homes and for self-defense. The dissenters, also claiming fidelity to history, said the amendment was meant to ensure that states could raise militias to confront a too-powerful federal government if necessary.

But Scalia rejected that view. “Undoubtedly some think that the Second Amendment is outmoded in a society where our standing army is the pride of our Nation, where well-trained police forces provide personal security, and where gun violence is a serious problem. That is perhaps debatable, but what is not debatable is that it is not the role of this Court to pronounce the Second Amendment extinct,” Scalia wrote.

His dissents in cases involving gay rights could be as biting as they were prescient. “By formally declaring anyone opposed to same-sex marriage an enemy of human decency, the majority arms well every challenger to a state law restricting marriage to its traditional definition,” Scalia wrote in dissent in 2013 when the court struck down part of a federal anti-gay marriage law. Six months later, a federal judge in Utah cited Scalia’s dissent in his opinion striking down that state’s constitutional ban on same-sex marriage.

Scalia was passionate about the death penalty. He wrote for the court when in 1989 it allowed states to use capital punishment for killers who were 16 or 17 when they committed their crimes. He was on the losing side in 2005 when the court changed course and declared it unconstitutional for states to execute killers that young.

“The Court thus proclaims itself sole arbiter of our Nation’s moral standards – and in the course of discharging that awesome responsibility purports to take guidance from the views of foreign courts and legislatures,” Scalia wrote in a scathing dissent.

In 2002, he dissented from the court’s decision to outlaw executing the mentally disabled. That same year, Scalia surprised some people with a public declaration of independence from his Roman Catholic church on the death penalty. He said judges who follow the philosophy that capital punishment is morally wrong should resign.

Scalia also supported free speech rights, but complained too. “I do not like scruffy people who burn the American flag,” he said in 2002, but “regrettably, the First Amendment gives them the right to do that.”

A longtime law professor before becoming a judge, Scalia frequently spoke at law schools and to other groups. Later in his tenure, he also spoke at length in on-the-record interviews, often to promote a book.

He betrayed no uncertainty about some of the most contentious legal issues of the day. The framers of the Constitution didn’t think capital punishment was unconstitutional and neither did he.

“The death penalty? Give me a break. It’s easy. Abortion? Absolutely easy. Nobody ever thought the Constitution prevented restrictions on abortion. Homosexual sodomy? Come on. For 200 years, it was criminal in every state,” Scalia said during a talk that preceded a book signing at the American Enterprise Institute in 2012.

The only child of an Italian immigrant father who was a professor of Romance languages and a mother who taught elementary school, Scalia graduated first in his class at Georgetown University and won high honors at the Harvard University Law School.

He worked at a large Cleveland law firm for six years before joining the faculty of the University of Virginia’s law school. He left that job to work in the administrations of Presidents Richard Nixon and Gerald Ford.

He then was appointed by Reagan to the U.S. Circuit Court of Appeals for the District of Columbia. Scalia and his wife, Maureen, had nine children.