U.S. teens rank between Latvia and Russia on financial literacy, far below Shanghai

American teens fall below half of their peers in a handful of other developed economies when it comes to financial literacy. Shanghai’s 15-year-olds perform the best, according to results of an international financial literacy test released Wednesday.

The mean score for American test-takers sandwiches the United States between Latvia, on the upper end, and Russia, on the lower end. 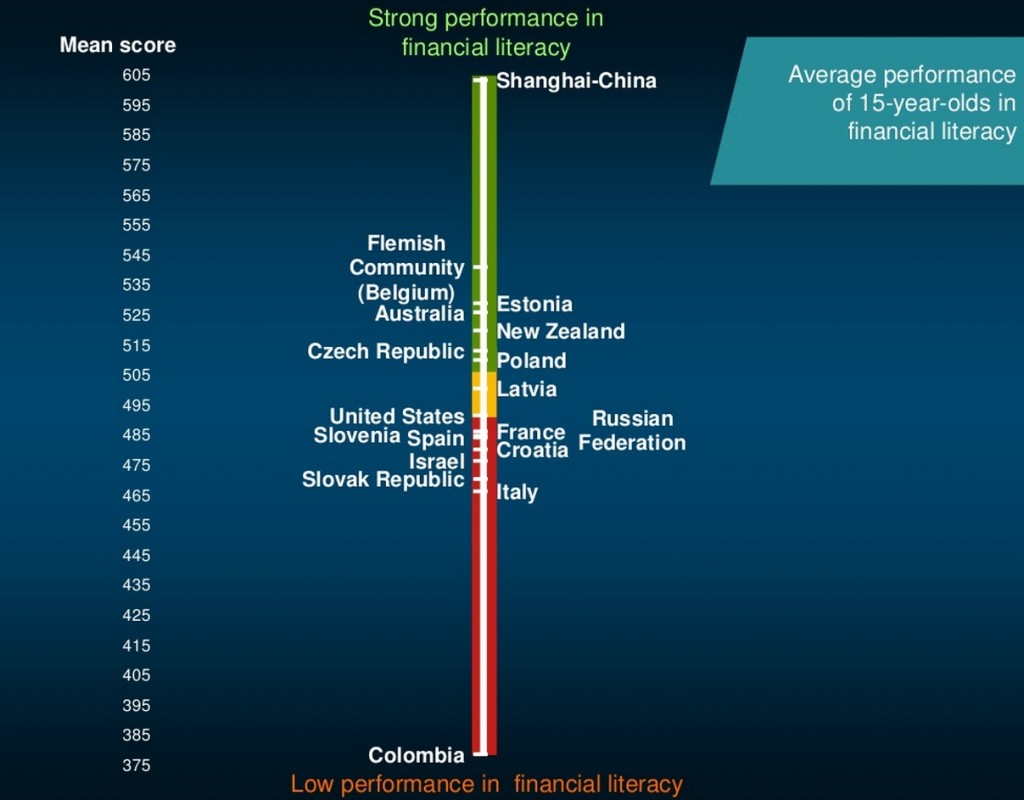 The Organization for Economic Cooperation and Development administered the two-hour written test through their Programme for International Student Assessment to 29,000 15-year-olds in 18 OECD countries or partner economies in 2012. (The financial hub of Shanghai is singled out because China’s and India’s participation in PISA is broken up regionally.)

Teens were quizzed on math, reading, science and problem solving (see sample questions). Parents and school principals were asked for contextual information about school and socioeconomic factors. This is the first international assessment of young people’s financial literacy of this scale. There’s a second study planned for 2015 to assess progress.

What explains the differential performance across economies? Not Gross Domestic Product, according to the OECD, which they report only accounts for 16 percent of the performance variance. Indeed, while the United States has the highest per capita GDP, financial literacy is just mediocre compared to countries with lower economic growth. As Making Sen$e has explored in depth, GDP is often a poor indicator of the economic health of individual citizens, which would seem to make more of a difference for student performance than would a figure like GDP, which measures the total value of all goods and services produced in a country.

Of course, country-level results are averages, and they’re based on a sample of students, not on a comprehensive census of all students in that country. 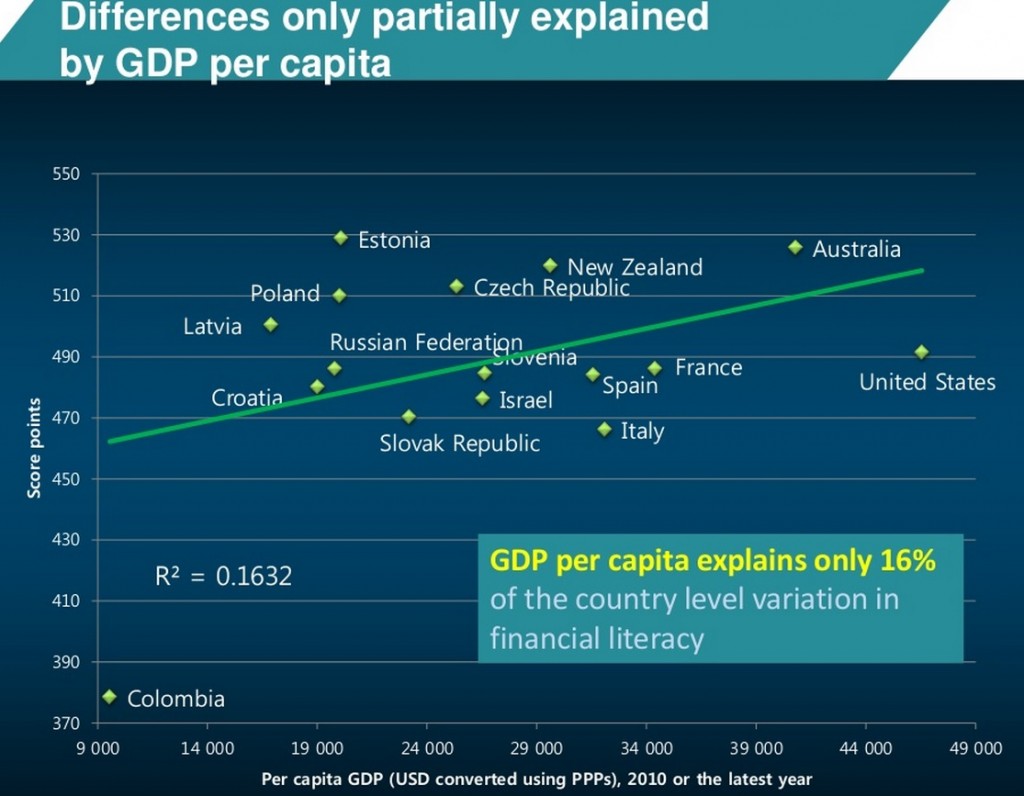 Student-by-student differences within country depend both on skill level in math and reading, but also on institutional factors like socioeconomic status, immigrant status and potentially, exposure to financial experiences, like managing a bank account. The OECD surveyed a wide swath of students from all types of schools — public and private, academic and vocational.

When it comes to education, policymakers talk a lot about “gaps” — specifically achievement gaps between students at different skill levels and from different backgrounds. On average, across the OECD economies surveyed, there’s about a 250 point spread between the 90th and 10th percentiles of performance on financial literacy. The United States is the only economy where the difference between the very top-performing students and the median is larger than the gap between the median and the lowest-performing students. In other words, the achievement of a few American students is much higher than the median in the U.S.

High financial literacy is positively associated with strong math and reading skills, but conversely, just being good at math or reading does not guarantee that students are well equipped to make good financial decisions (as much as can be judged by a test, that is). In France, Italy and Slovenia, for example, students who scored just as well in math and reading as students in other countries showed much lower proficiency in financial literacy than their aptitude in those related subjects would have predicted.

In the United States, socioeconomic status often influences the quality of school districts, which could affect how well students are prepared in the skills needed for financial literacy. Socioeconomic status explains about 17 percent of the variation among American students — slightly higher than the OECD average. That could say something about educational disparities, or it could reflect families’ experience with money. Across all economies, students from higher socioeconomic backgrounds get an average boost of 41 points on the test.

Globally, those who are not first or second generation immigrants (when controlled for socioeconomic level) tended to do slightly better, as did students from urban, as compared to rural, schools. But the United States has one of the narrowest gaps between rural and urban performance and a statistically insignificant gap based on immigrant status. The biggest gap between students from first or second generation immigrant families and those whose families have been in country longer is in France and neighboring Belgium (specifically, its Flemish community).

This time of year, whether it’s scooping ice cream, blowing poolside whistles or sorting mail for the family business, another crop of American teenagers is entering the ranks of the employed. About 70 percent of American students earn money from some kind of work outside of school — either during vacation or over the summer. How much does that experience teach them about financial literacy? Looking at the most financially literate students (according to the exam) — in Shanghai — suggests that outside work is not indicative of this kind of literacy. Shanghai has the lowest percentage of 15-year-olds working jobs outside of school.

So once students earn money, does putting it in a bank account help them develop financial literacy? For nine of the 13 OECD economies, when adjusted for socioeconomic status, having a bank account didn’t make much of a difference for student performance on the test. But in those economies where rates of teens having bank accounts are the highest, like New Zealand and Slovenia, having a bank did give students a significant boost.

But for all the talk of “gaps,” anyone who’s tried to learn a new concept, or taken a standardized test, for that matter, knows that attitude makes a difference. And interestingly, PISA’s definition of financial literacy hinges on students having a knowledge and understanding of financial literacy and the motivation and confidence to apply that competency. Nowhere does that “confidence gap” affect scores more than in the United States. In other words, the score point difference between those students who said they disagreed with the statement “When confronted with a problem I give up easily” and those who agreed is close to 80 points.

Likewise, students who agreed with the statement “I like to solve complex problems” earned, on average, scores that were nearly half a proficiency level higher than those who disagreed, the OECD reports.

But unlike in the adult OECD population, where men tend to be more proficient in financial literacy than women, there was no recognizable gender difference among 15-year-olds, except in Italy. But it’s not all good news on the gender front. The data on girls’ and boys’ attitudes toward mathematics is more concerning. Even when they perform the same, girls express less confidence and report more anxiety about their mathematical ability, according to the test results.

Overall, teenagers in every country could have done better. Only one in 10 of all the test-takers could answer the hardest questions, which tested, for example, an understanding of transaction fees, tax brackets and tasks like balancing a checkbook with transfer fees.

Speaking to reporters after the release of Wednesday’s results, U.S. Education Secretary Arne Duncan said that America’s average performance wasn’t good enough, particularly for today’s economic landscape, where lifelong jobs with guaranteed pensions are hard to come by. Young adults need a “level of financial literacy that 20 or 30, 40 years ago, maybe wasn’t applied. But today it’s an absolute necessity,’’ he said.

The OECD underscores the essentiality of financial literacy, noting in their report that financial decisions are harder to make than they were for earlier generations because financial services and systems are now more complex. They also point to the increased financial burden awaiting young people who will live longer — and likely with less welfare and fewer retirement benefits. Furthermore, because of the prevalence of online banking, today’s youth are already making more financial decisions, and at a younger age, than perhaps was previously the case.

Nan Morrison, CEO and president of the Council for Economic Education, which advocates for financial literacy standards in the United States, echoed Duncan’s disappointment with the American results, but said it wasn’t surprising. Only 19 states currently require a personal finance course, according to CEE, and perhaps a more significant obstacle to cultivating these lifelong skills is that most parents don’t feel equipped to pass financial knowledge to their children.