Updated Dec. 24, 2014 | A vivid image of a lifeless boy being carried away from a bomb blast taken during this year’s Gaza-Israel conflict has somehow made its way to an iPhone case for sale on Amazon.

The photo was shot by The New York Times staff photographer Tyler Hicks, who captured an image of a man carrying the boy, one of the four Palestinian children killed by an Israeli bomb attack that day. The photo was featured on the front page of the Times as part of the paper’s coverage of the Gaza conflict.

But Times did not grant these Amazon-authorized sellers permission to use his photo for commercial purposes, much less an iPhone case emblazoned with the casualties of war. And Hicks is not the only photographer seeing his photos appear on products on Amazon. 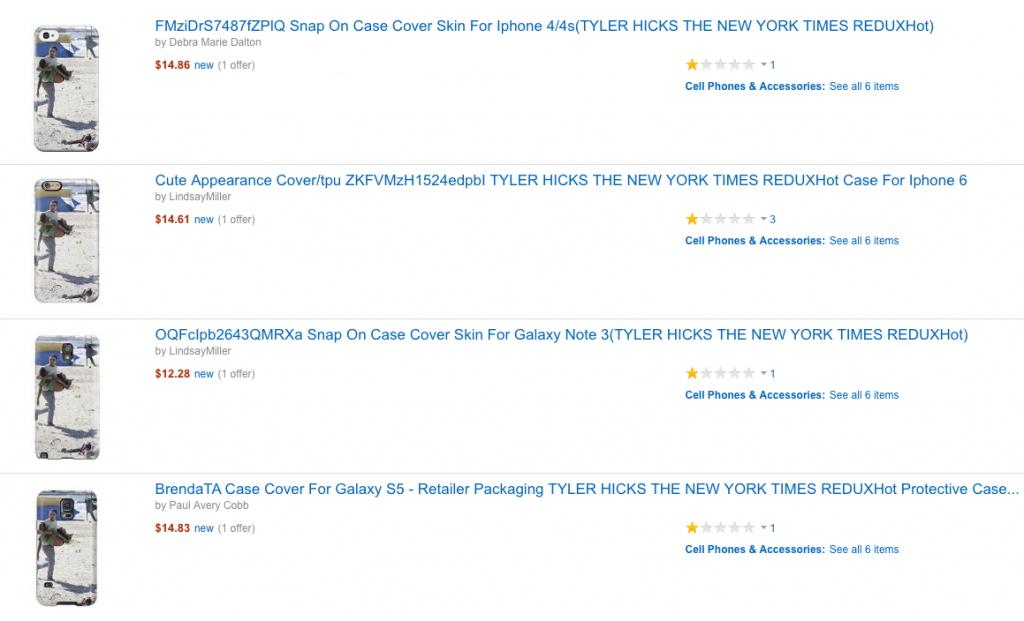 Screen shot of third-party vendors on Amazon.com selling iPhone cases with the unauthorized usage of The New York Times photographer Tyler Hicks’ horrifying snapshot of the Gaza Strip conflict from this summer.

“Who wants to buy a picture with a dead child on it,” said Tomas van Houtryve, a National Geographic photographer, who recently surfaced several unauthorized Amazon phone case sales in a series of posts on Instagram.

“If any human being in the process had seen that, I don’t see how it could possibly get through,” he said.

After finding 50 or more cell phone cases for sale on Amazon, decorated with his drone-assisted photo of Lake Oroville, California, van Houtryve emailed a formal request to Amazon to remove the illegal items. What followed was a “wall of automated low-level interaction,” van Houtryve said, and a fruitless attempt to get Amazon to resolve the issue. 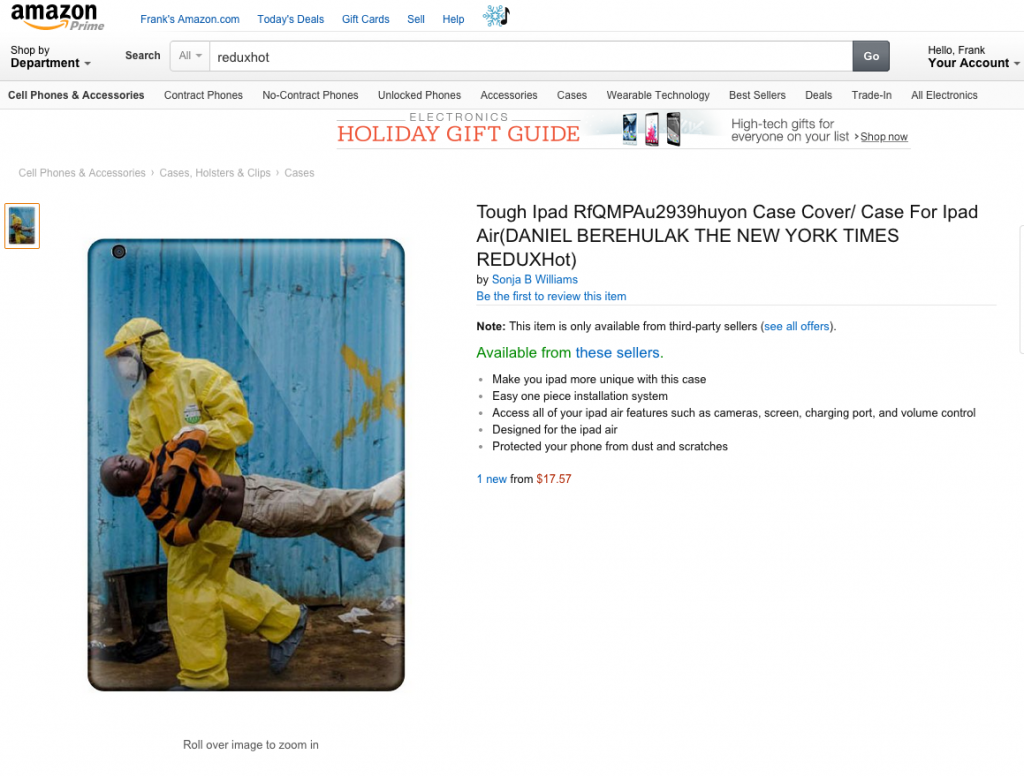 Amazon screen shot shows an iPad case featuring a stolen image from Daniel Berehulak of a boy being treated by Ebola doctors.

Van Houtryve, whose photo was selected as one of Time Magazine’s top 10 influential photos of 2014, then found other items for sale that featured other photos within the same online slideshow, including those of an Ebola patient and a Malaysia Airlines Flight 17 victim. 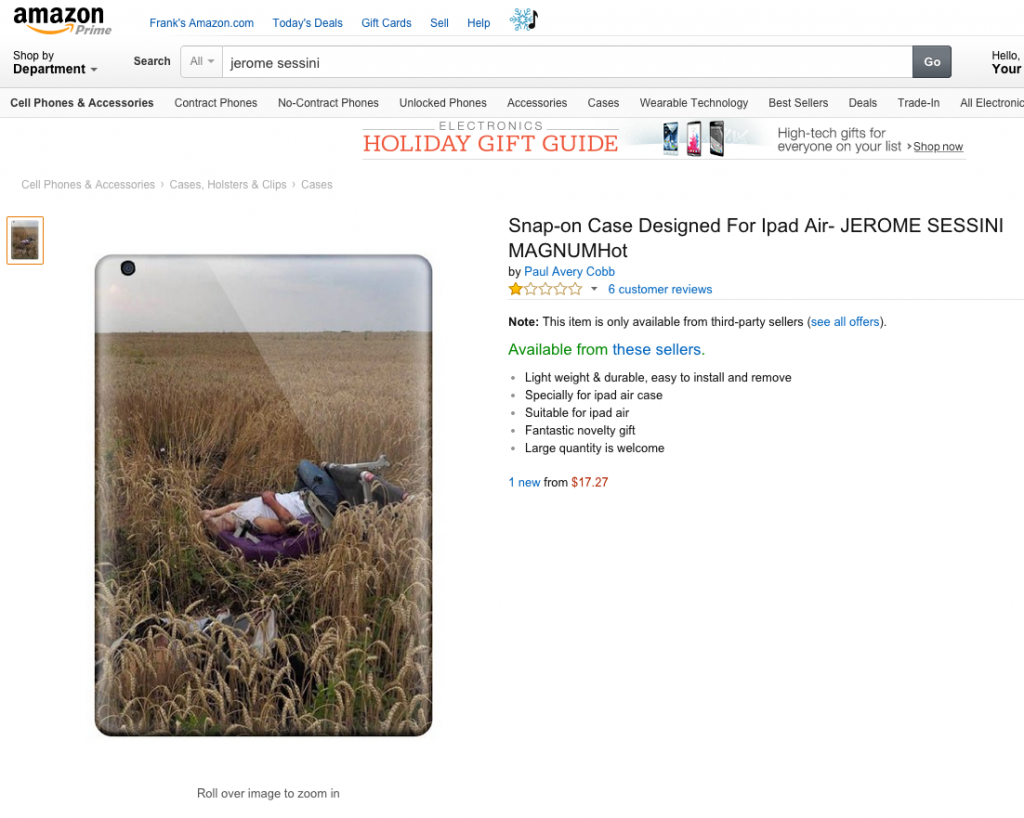 Van Houtryve told the NewsHour that after a couple of rounds of submitting a copyright infringement complaint to Amazon, and the online retailer replying back that it had removed said items, the problem persisted.

Repeatedly, van Houtryve requested that Amazon take down all the illegal items and provide information on any transactions that may have taken place and the contact information of the vendors in question.

Amazon told van Houtryve in an email that it was unable to provide the additional info he had requested, adding that “We trust this will bring this matter to a close.”

When van Houtryve alerted the online retailer again that at least 13 vendors were illegally using his photo, Amazon responded with the following:

“Amazon respects a manufacturer’s right to institute policies and rule to manage and control the distribution of its product,” the online retailer said in an email to van Houtryve. “However, Amazon considers the enforcement of these policies and rules to be a matter between the manufacturer and the retailers. As a result, it would not be appropriate for Amazon to insist in such enforcement activities.”

At no time, van Houtryve said, did the emails from Amazon list a case number for follow-up or were signed with a person’s name. Amazon has not immediately responded to the NewsHour’s request for an interview.

The email did suggest that van Houtryve contact the sellers directly. Van Houtryve did so to no avail and even ordered a few of these items to peruse the invoice for basic contact information. The invoices were blank. Requests for an invoice from the sellers also largely went ignored.

Unsure exactly what to do next, van Houtryve said he contacted the agencies of photographers whose photos were also being used illegally.

“If this is a company that can ship anywhere in the world in 24 hours, why can’t they take down illegal items?” van Houtryve said.

Editor’s note: At the time this story was published, cases with copyrighted images were still for sale from many vendors on Amazon.com. PBS NewsHour has reached out to Amazon for comment on this matter. At this time we have not received a response, but Amazon told PetaPixel that “We won’t be commenting. The item is not listed for sale on Amazon.” Van Houtryve said, for the first time in five days, there are now no infringing products when he searched his name on Amazon. The Times told the NewsHour that they asked Amazon to take down the products that used Tyler’s images without consent.