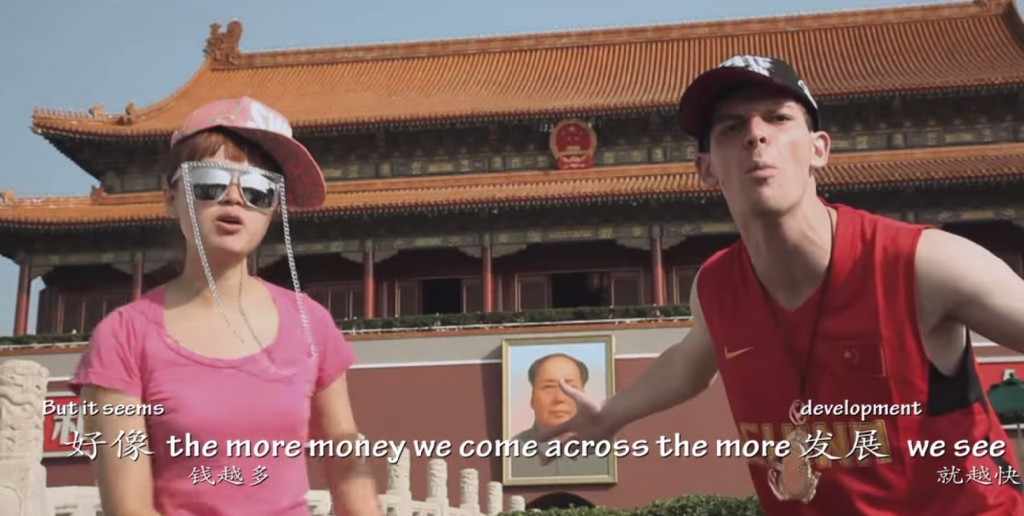 “Gangnam Style” — at over 2 billion views on YouTube, if for some reason you haven’t seen (or heard) this K-pop sensation, go ahead and click through. We’ll wait.

Slightly more forgivable, although only less so, is missing “Laowai Style!”, the music video parody from Jesse Appell about the life of a foreigner (laowai) in Beijing. A Fulbright Scholar in China, and now stand-up comedian earning a living there, Appell has been Making Sen$e’s far-flung Sino-economics correspondent since 2012.

Read Jesse’s explanation of “Laowai Style” and the lyrics in his first Making Sen$e post.

A year later, in 2013, he debuted another hit, “Mo Money Mo Fazhan,” a parody of “Mo Money Mo Problems.” The more development and consumption in Chinese society, the more ills that afflict it — pollution and economic inequality, to name a few. In another post on Making Sen$e, “China’s Theme Song: Can I Substitute GDP for Disposable Diapers?” Appell explains that tension.

Paul Solman caught up with Appell, his former student, in Boston for tonight’s Making Sen$e Thursday segment. Appell, the self-proclaimed “best macroeconomic, Chinese-English, bilingual rapper in the world,” explains why money is such a big deal in China — more so than in the United States. “Everybody’s always talking about how am I going to make money? How much did that subway cost to build? How much do I pay to go on the subway? These issues come up in America, but they’re everywhere in China.”

For more on China and its economic development, check out Paul Solman’s 2005 series “China Rising.” Our two favorite installments are below.

In “Misinvestment in China,” Paul examined the government’s attempts to address inequality.

In one of the last segments of the series, Paul took a closer look at China’s rampant intellectual piracy.