Updated at 6:10 p.m. EDT: Earlier Monday, the U.S. Navy Office of Information released biographical information on Navy Yard shooter Aaron Alexis. The report includes his home of record as New York, N.Y., his date of enlistment into the military as May 5, 2007.

Updated at 5:06 p.m. EDT: The AP has published an FBI mugshot of the deceased shooter, Aaron Alexis. 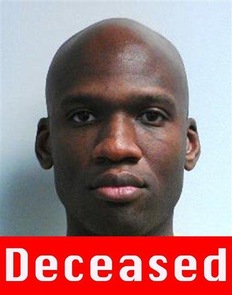 Updated at 3:45 p.m. EDT: Officials stated that the Washington Navy Yard shooter who died after Monday’s rampage has been identified as Aaron Alexis, 34, from Texas.

Updated at 2:06 p.m. EDT: In a recent press conference, Mayor Vincent Gray said at least 12 people have died in the Navy Yard shooting. D.C. Police Chief Cathy Lanier said a motive is still unknown and that forces are still searching for two other possible shooters.

Obama: "We will do everything in our power to make sure whoever carried out this cowardly act is held responsible." #NavyYardShooting

Updated at 12:26 p.m. EDT: In a recent press conference, Washington D.C. police chief Cathy Lanier said that two other possible shooters may be at large in connection with the Navy Yard shooting.

MORE: Navy officials say at least six people have died in a shooting at the Washington Navy Yard: http://t.co/JyvZPfrjDG -MM