TIJUANA, Mexico — Hundreds of migrants approaching the U.S. border from Mexico were enveloped with tear gas Sunday after several tried to make it past fencing and wire separating the two countries.

Earlier in the morning, a group of Central Americans staged a peaceful march to appeal for the U.S. to speed up the asylum claims process, but their demonstration devolved as they neared the crossing with the U.S. and some saw an opportunity to breach the border. 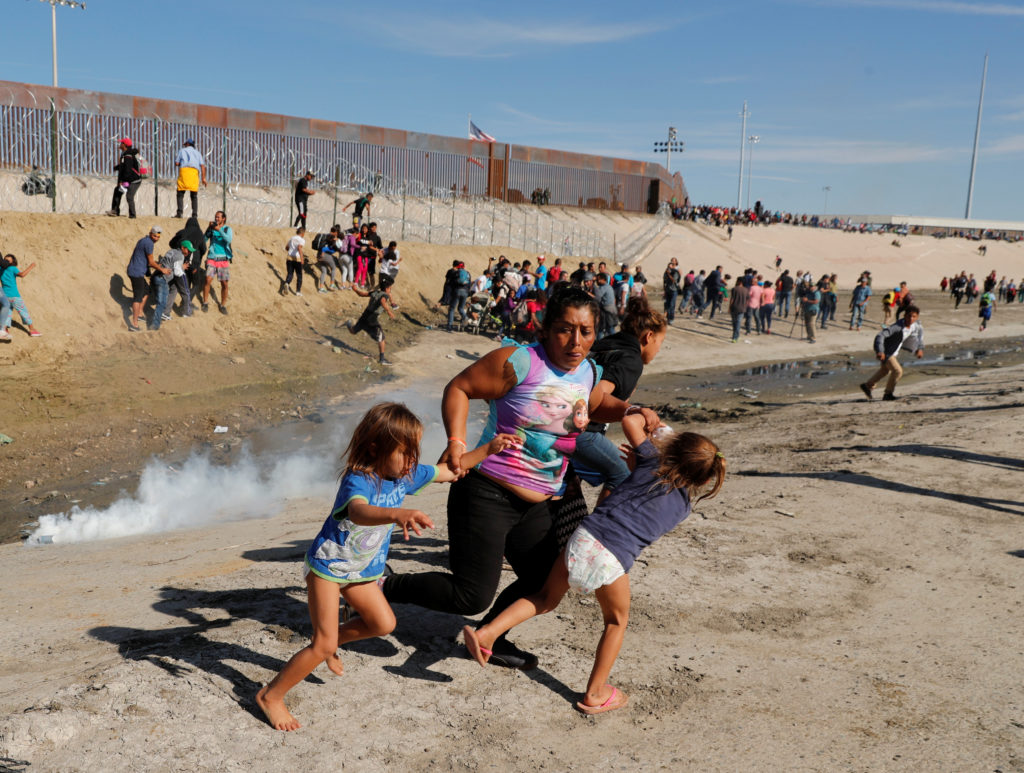 A migrant family, part of a caravan of thousands traveling from Central America en route to the United States, run away from tear gas in front of the border wall between the U.S and Mexico in Tijuana, Mexico November 25, 2018. Photo by Kim Kyung/Reuters

U.S. agents shot several rounds of gas, according to an Associated Press reporter on the scene, after migrants attempted to penetrate several points along the border. Migrants sought to squeeze through gaps in wire, climb over fences and peel back metal sheeting to enter.

Children screamed and coughed in the mayhem of the tear gas. Fumes were carried by the wind toward people who were hundreds of feet away, not attempting to enter the U.S.

Yards away on the U.S. side, shoppers streamed in and out of an outlet mall.

Honduran Ana Zuniga, 23, said she saw other migrants open a small hole in concertina wire at a gap on the Mexican side of a levee, at which point U.S. agents fired tear gas at them.

“We ran, but when you run the gas asphyxiates you more,” she told the AP while cradling her 3-year-old daughter Valery in her arms.

U.S. Customs and Border Protection helicopters flew overhead, while U.S. agents held vigil on foot beyond the wire fence in California. The Border Patrol office in San Diego said via Twitter that pedestrian crossings have been suspended at the San Ysidro port of entry at both the East and West facilities. All northbound and southbound traffic was halted.

Earlier Sunday, the group of several hundred migrants pushed past a blockade of Mexican police who were standing guard near the international border crossing. They appeared to easily pass through without using violence, and some of the migrants called on each other to remain peaceful.

They carried hand-painted American and Honduran flags while chanting: “We are not criminals! We are international workers!” 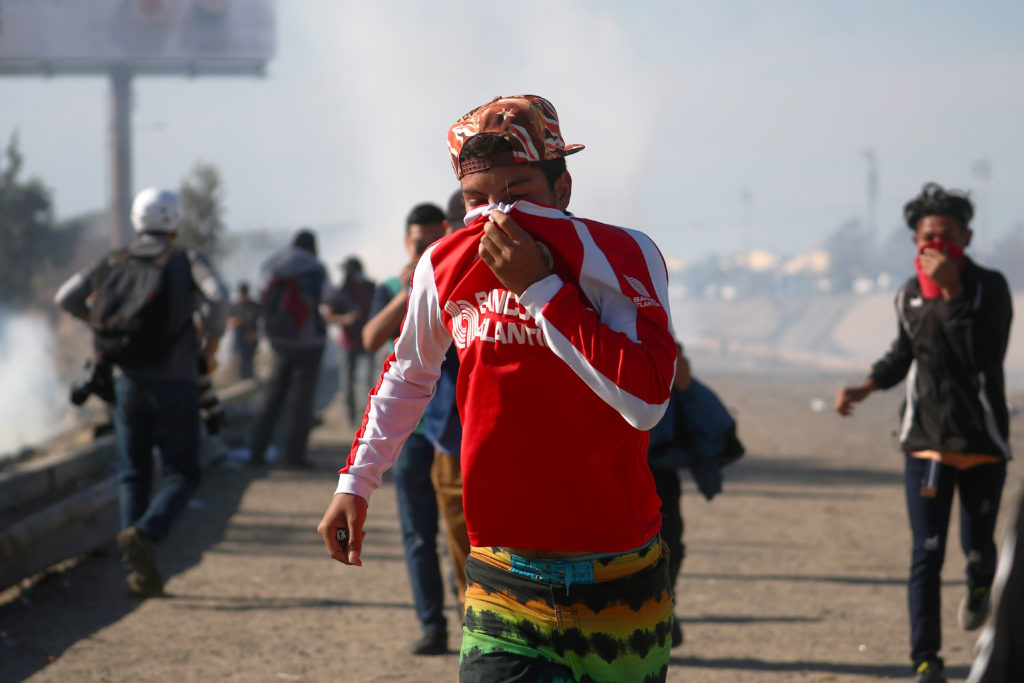 A migrant covers his face as he runs from tear gas, thrown by the U.S border patrol, near the fence between Mexico and the United States in Tijuana, Mexico, November 25, 2018. Photo by Hannah McKay/Reuters

Migrants were asked by police to turn back toward Mexico.

Around 5,000 migrants have been camped in and around a sports complex in Tijuana after making their way through Mexico in recent weeks via caravan. Many hope to apply for asylum in the U.S., but agents at the San Ysidro entry point are processing fewer than 100 asylum petitions a day.

Irineo Mujica, who has accompanied the migrants for weeks as part of the aid group Pueblo Sin Fronteras, said the aim of Sunday’s march toward the U.S. border was to make the migrants’ plight more visible to the governments of Mexico and the U.S.

“We can’t have all these people here,” Mujica told The Associated Press.

Tijuana Mayor Juan Manuel Gastelum on Friday declared a humanitarian crisis in his border city of 1.6 million, which he says is struggling to accommodate the crush of migrants.

U.S. President Donald Trump took to Twitter Sunday to express his displeasure with the caravans in Mexico.

“Would be very SMART if Mexico would stop the Caravans long before they get to our Southern Border, or if originating countries would not let them form (it is a way they get certain people out of their country and dump in U.S. No longer),” he wrote.

Mexico’s Interior Ministry said Sunday the country has sent 11,000 Central Americans back to their countries of origin since Oct. 19. It said that 1,906 of them were members of the recent caravans.

Mexico is on track to send a total of around 100,000 Central Americans back home by the end of this year.

Left: A migrant girl from Honduras, part of a caravan of thousands traveling from Central America en route to the United States, cries after running away from tear gas thrown by the U.S. border control near the border wall between the U.S. and Mexico in Tijuana, Mexico November 25, 2018. Photo by Kim Kyung-Hoon/Reuters