‘Energy vampires’ are draining your power and money. Here’s what to do about it.

From the moment the alarm goes off in the morning until the lights go out at night — Americans live their lives powered by electricity.

But even when appliances and devices are powered off — if the devices are plugged in, they’re sucking up power. These so-called “vampire electronics” account for five to 10 percent of an average home’s energy use, according to the Department of Energy’s Lawrence Berkeley National Laboratory.

And that can be a drain on a consumer’s wallet. Vampire electronics can add more than $100 per year to a home’s electric bills, according to the Department of Energy. 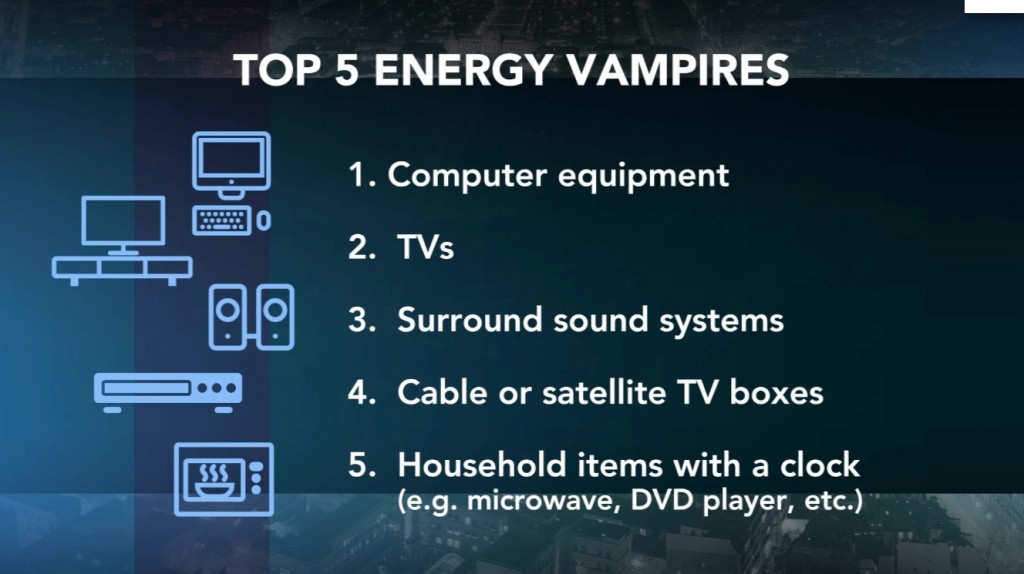 What can you do about the phantom power driving up your electricity bill? Here are a few suggestions from the Lawrence Berkeley National Laboratory:

If you’re not using an appliance, turn it off and unplug it from the wall.

Instead of keeping your computer on while you step away, switch it to sleep mode.

Turn off multiple electronic devices with just one switch.

Look for low standby products that draw less energy when plugged in.

Watch PBS NewsHour Weekend’s report on Burlington, Vt., becoming the first city in the U.S. to run fully on renewable energy below.

Editor’s note: An earlier version of this article incorrectly stated that so-called “vampire electronics” can add more than $100 to a home’s electric bill each month.