At the height of her career, Venus Williams challenged Wimbledon to award equal prize money to women. Gwen Ifill spoke with the director of the new film from espnW, “Venus Vs.,” and to sports reporter Christine Brennan, who is featured in the film “Let Them Wear Towels,” about women fighting for the right to be able to do their jobs in the locker room. Video shot by Joshua Barajas and Ibrahim Balky. Video edited by Justin Scuiletti.

“It’s a shame that the name of the greatest tournament in tennis, an event that should be a positive symbol for the sport, is tarnished.” 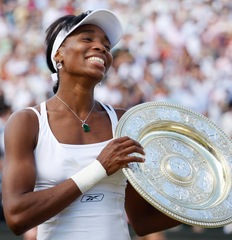 In 2007, Venus Williams became the first Wimbledon women’s champion to earn as much as the men’s winner (Roger Federer). Photo courtesy of ESPN Films and espnW

When Venus Williams wrote those words in an editorial in a British newspaper in 2006 about the lack of pay equality on the eve of Wimbledon, it was a crucial moment in the long battle to end pay disparities for Grand Slam championships in tennis.

The crusade that Williams — and others long before her like Billie Jean King — fought is memorably captured in a new documentary by director Ava DuVernay called “Venus Vs.” that airs Tuesday night on ESPN.

DuVernay examines how Williams became a prominent leader on the question of pay equity at the moment of her greatest fame and accomplishments, literally making her case the day before she would compete in one of the longest matches in Grand Slam history en route to yet another Wimbledon title. The film is part of a new series produced by espnW and airing on Tuesday nights on ESPN this summer that explores the accomplishments and obstacles women have faced in the world of sports.

The series, “Nine for IX,” marks the latest anniversary of Title IX and its important legacy in education and sports. It features nine films directed by women that focus on the stories of more well-known women — Venus Williams, basketball coach Pat Summitt, Mia Hamm and the 1999 U.S.women’s World Cup team — as well as those who are less known to the public such as the late record-setting deep[sea diver Audrey Mestre. 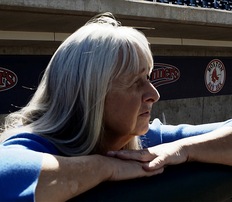 In 1978 Melissa Ludtke of Sports Illustrated successfully challenged Major League Baseball after she was kept out of the New York Yankees’ locker room. Photo courtesy of ESPN Films and espnW

Another episode, “Let Them Wear Towels,” looks at the challenges the earliest female sportswriters and journalists encountered while trying to cover professional men’s teams in the 1970s and 80s.

At times, female journalists were insulted and mocked by the very athletes and managers they covered. Other times, they were locked out or even physically removed from the locker rooms of male athletes. Most famously, it chronicles how members of the New England Patriots sexually harassed sportswriter Lisa Olson in 1990.

As one journalist puts it in the documentary, the battles women sportswriters were facing was actually “about our invasion into the world of sports.”

As Wimbledon began its second week, Gwen Ifill sat down with director DuVernay and sportswriter Christine Brennan, who appears in “Let Them Wear Towels,” to discuss the new films, the broader aim of the series and the continuing impact of Title IX.