Thousands gathered in Baltimore Saturday for a peaceful “victory rally” outside City Hall.

Although there was a heavy presence of police and National Guard troops, the mood at the protest was celebratory following Baltimore City State’s Attorney Marilyn Mosby’s Friday announcement that six officers would be charged in the death of Freddie Gray, a Baltimore resident who died April 19, a week after his spinal cord was severed in the back of a police van.

The gathering featured a parade of speakers, including Maryland State Sen. Catherine Pugh, president of the National Black Caucus of State Legislators, who said, “Freddie Gray becomes symbolic of all of the black men in this country who have been treated unfairly by our police, and we know that police reform is on the way.” 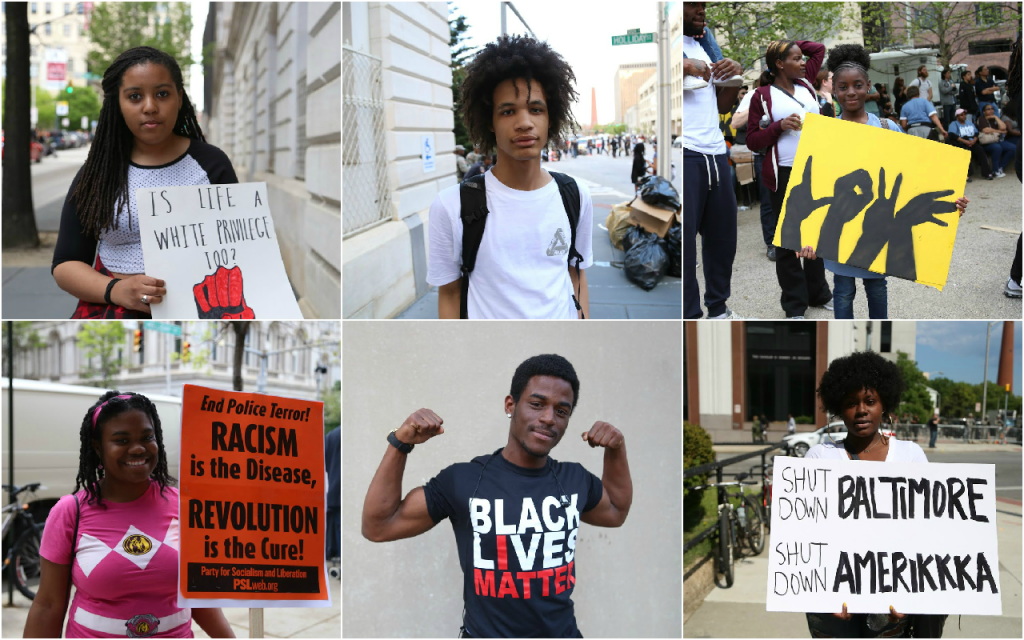 Many of those gathered were young people who had marched to City Hall from the Gilmor Homes, a public housing development where Gray lived.

PBS NewsHour spoke to several of these youths to learn more about how they feel about what is happening in their city. 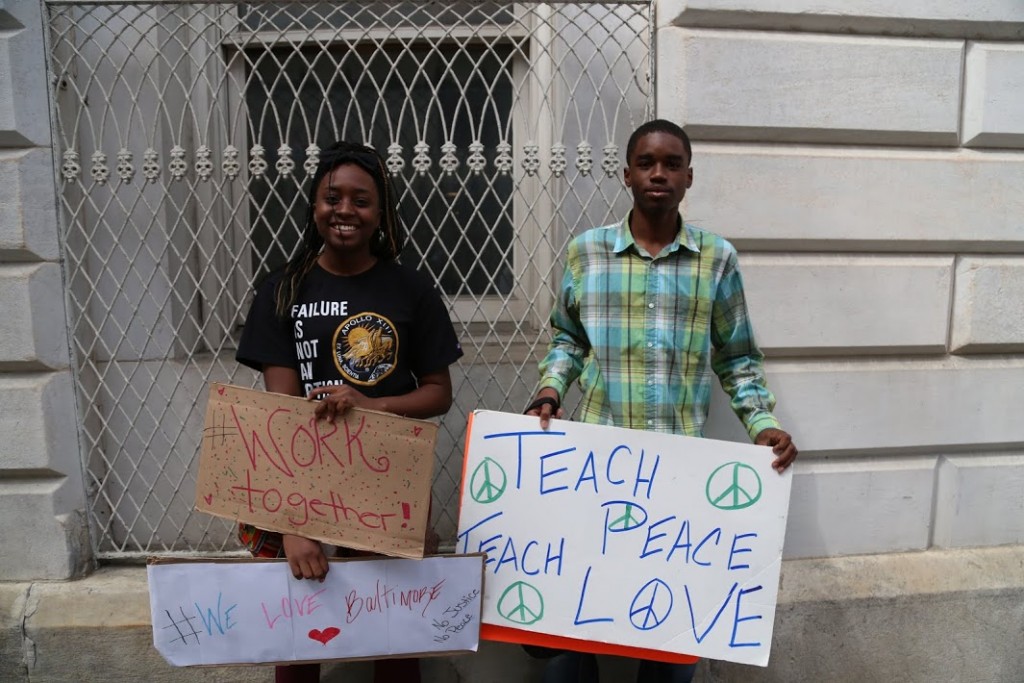 “We used to just sit on the outside and watch what was happening. But it was really sad to see what was going on. I didn’t really understand it. But I’ve gone to school and I’ve talked to some of my peers, and now that I’m here, I understand where the passion is coming from.”

“I’m really proud of Baltimore for coming out here all together as one. It’s inspiring to see so many people of different races. I just love to see diversity, and I’m really glad that they’re coming together.”

“Personally I believe that some of the violence was unnecessary. It lead people to believe that we were doing this as thugs, as criminals, but it’s not a thing of violence, it’s a thing of protest.”

“Last week, no one was talking about this. My classmates and I, we were talking about going to the movies. This week, all we spoke about was this crisis.” 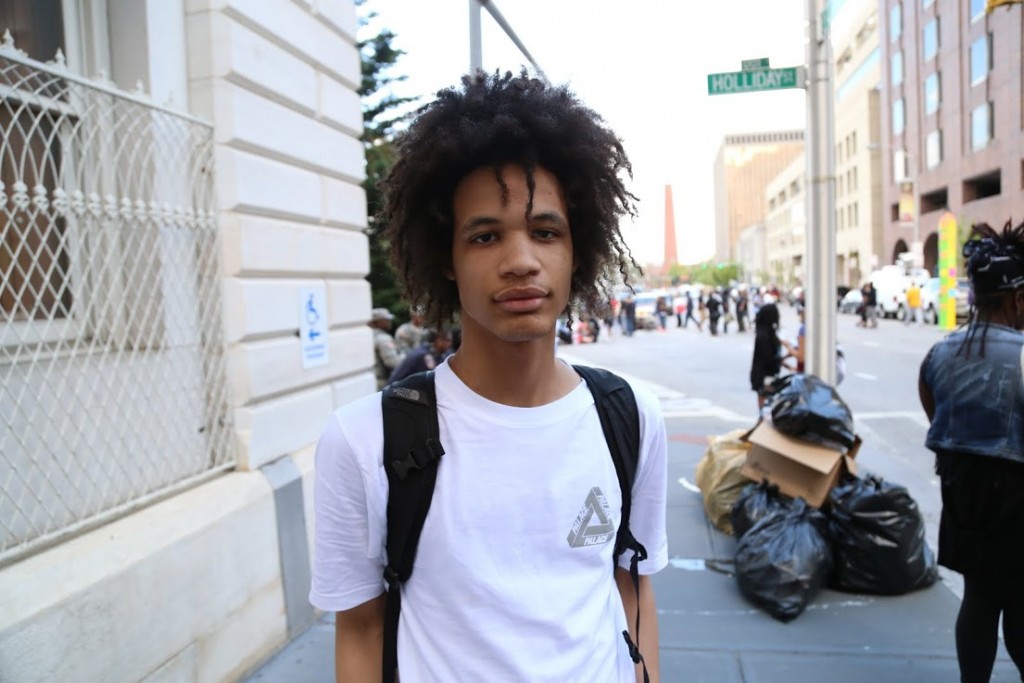 “I don’t consider [the rioting] violence, just because it was for a cause. And I feel like, honestly, it was the only way for the younger generation to be heard. No one really listens to people who aren’t around their age. That was just their form of expression and their way to be heard, I just saw it as that, I didn’t see it as violence or them trying to be rebels or anything. It’s just for a cause, it’s a necessary cause: humanity.” 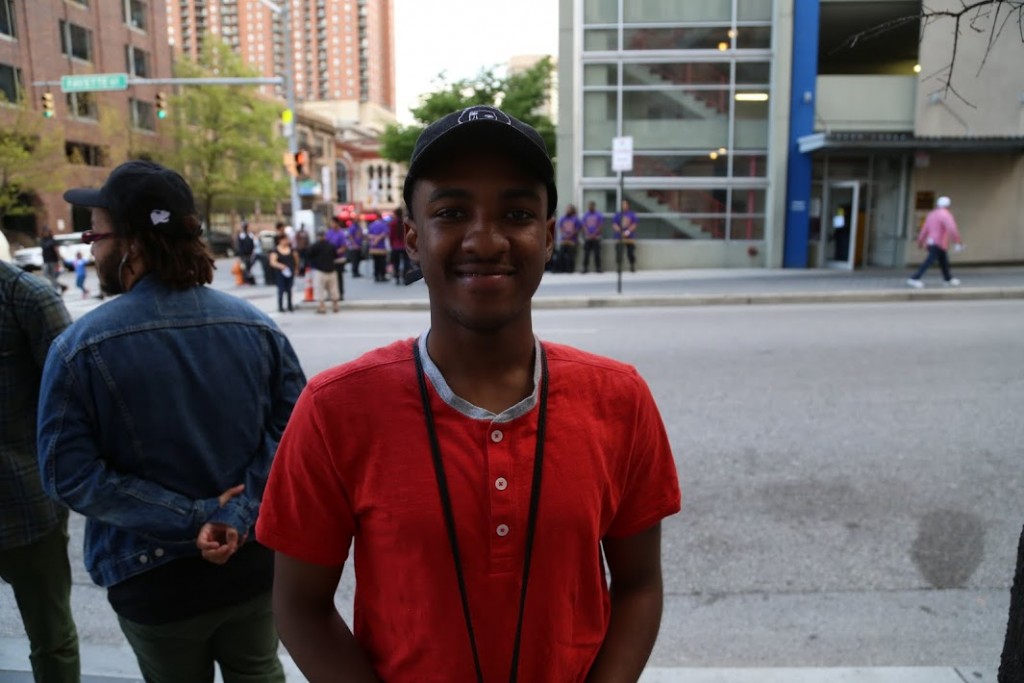 “I think that if [the media] can actually come down here and get some stuff like this, the peaceful protesting that we’ve done, then they can actually see a different side of Baltimore, rather than the violence that has been going on.”

“I want people to know that this is really one of the greatest cities in America. Other people, they think that we’re always about drugs and violence and they only get picture and videos from “The Wire.” I always didn’t like that, when people categorize my city as nothing but violence. Actually no, it’s not like that. You have to come here and actually see what we do, and actually get a better picture.” 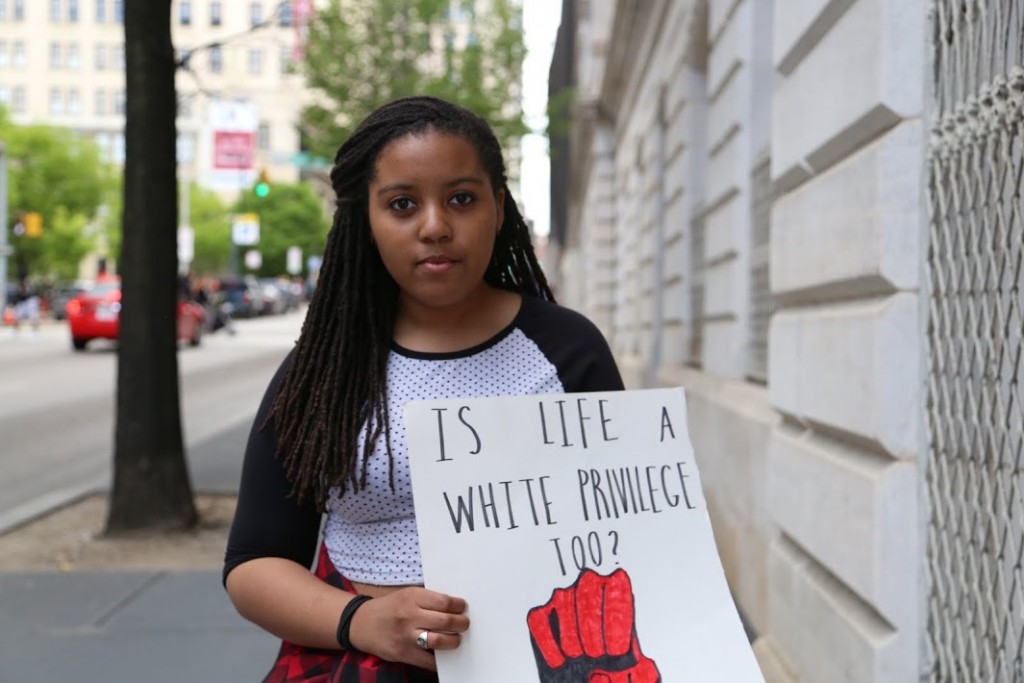 “You have people listening to only one voice, which is the media, which is predominantly white. I feel like no one’s really listening to us, people in Baltimore, and no one really cares what’s going on unless someone’s setting things on fire, unless someone’s breaking into a CVS. I feel like everyone’s just focusing on the property, and no one’s really focusing on the problem at hand, which is police brutality.” 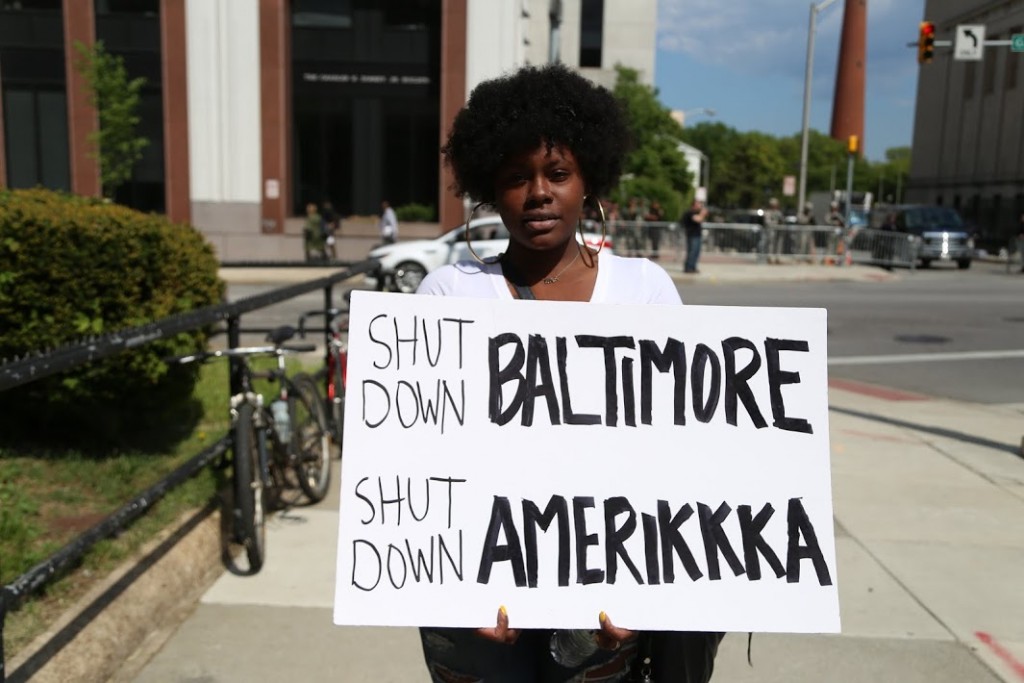 “I feel like some violence is necessary. I feel movements like MLK and Malcolm X, they had to have both of those elements. That violence that the Black Panthers had brought, that strength and then those peaceful protests in order for it to work. I don’t condemn anybody that used violence this past Monday to state their point because it’s how you feel. And when you’re tired of something, you can’t shake a bottle and blame the soda for coming out. You got to blame who shook it, and that’s just how I look at it.”

“The youth’s role is to advocate for themselves. To speak on what’s going on in Baltimore, speak on the unfair education, speak on how you have to live next to abandoned homes, speak on gentrification in the city that’s leaving a lot of people displaced, say how you feel. And if that involves you not having a filter and showing some type of anger then you should say that too. Sometimes you have to show people your deeper inner-self to get them to listen.” 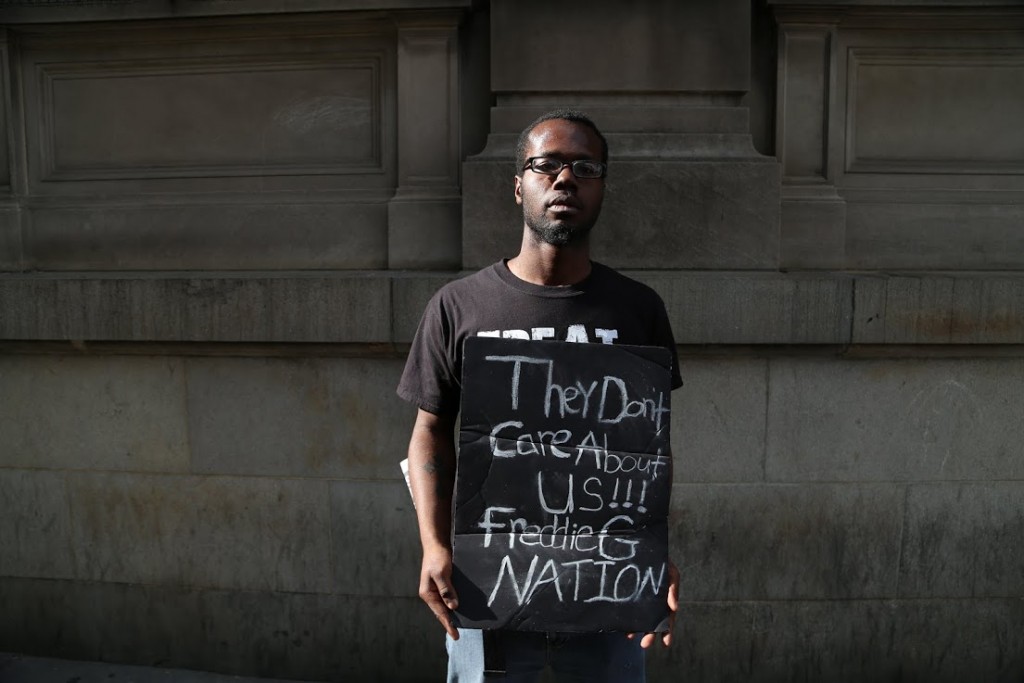 “I would like to see justice, and a change around the world. Build up a better community, not have money put to things that’s unnecessary, that we’re not probably going to be able to use. Build up our homes. All these abandoned houses around my streets. We got people out here that’s on the Section 8 line, and it takes years and years to get a Section 8 home. Just money out here for us to use to rebuild our houses. I’m tired of seeing people out on the street, have to force themselves to live in a shelter. It shouldn’t be that way. And jobs. Everybody should be equal enough to have jobs.” 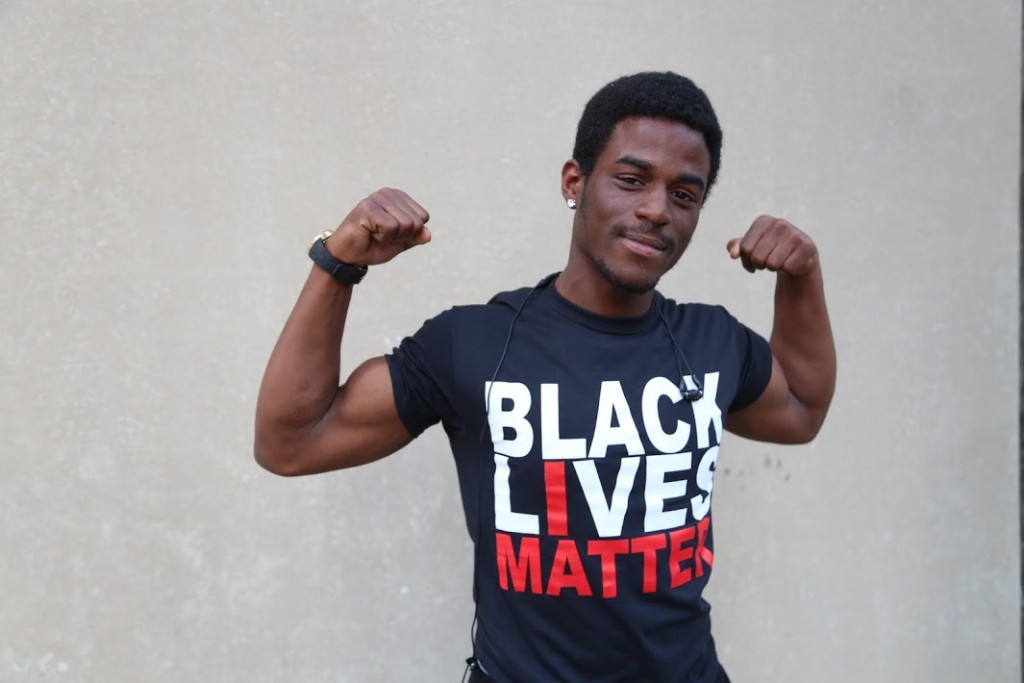 “If we don’t get the government changed, these little kids are going to be living in the same climate we are now. So I’m here for the little kids, so when they grow up they won’t have to go through everything we’ve went through, seeing all these killings.”

“When we talked to the police the first time, nobody listened. No news reporters came down here, nobody. But as soon as we started destroying stuff, it was all ‘bring the National Guard they’re out of control,’ ‘bring the news reporters.’ It could have went differently, but nobody really wanted to listen, so it got violent.” 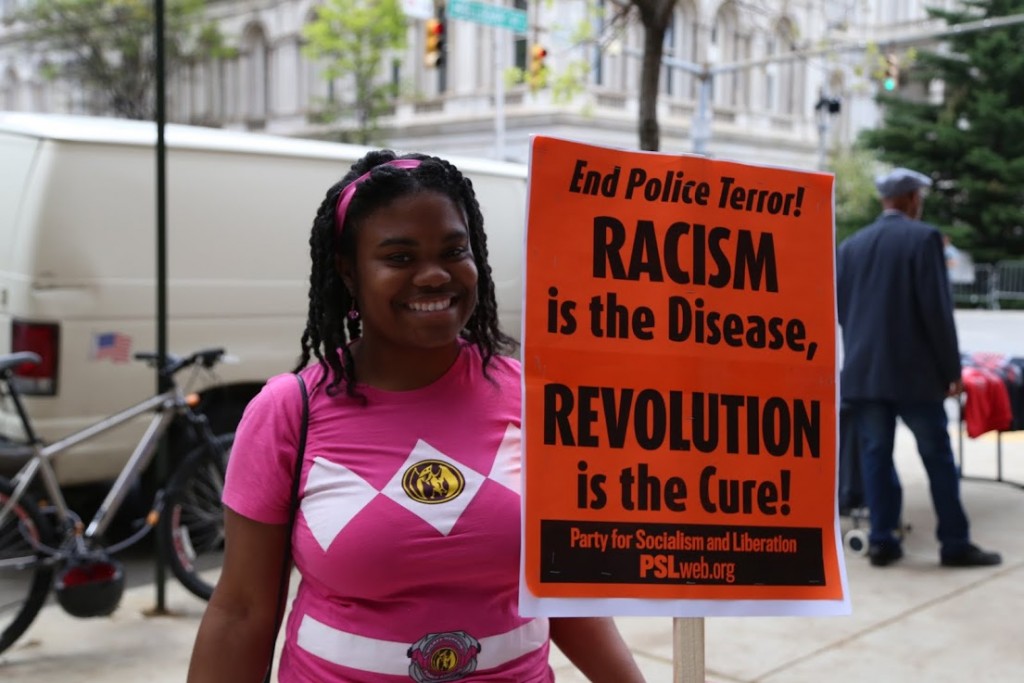 “I believe that there are many unjust things happening in many disenfranchised communities, not just here but globally. People of color people in general need to stand up for what they believe in.”

“I think the anger the children are feeling, that’s something real. And it’s not just about Freddie Gray. That’s about the poverty, that’s about that people don’t care about our educational system here. We don’t have funding for our schools. Our kids have to be packed into rooms with marginal books, and they’re not being able to reach their fullest potential because people are looking down on Baltimore. People aren’t funding Baltimore, we’re not doing what we’re supposed to as a city to take care of our youth.”

“In this situation, I believe justice is carrying out due process properly. They need to make sure everything is being done the way it’s supposed to be done in a positive way and by the book. Nobody should be playing games with information, destroying information. If they truly did what they’ve been indicted for, they need to go to jail. That is justice. Because If I went out and hurt someone, I would be in jail today. And I don’t think anyone is above the law.”

PBS NewsHour wants to know: What’s your take on the situation in Baltimore? Share your views in the comments section below.

Left: A large crowd marches from Baltimore City Hall to the scene of unrest earlier in the week, in Baltimore, Maryland May 2, 2015. Thousands took to the streets of Baltimore on Saturday as anger over the death of young black man Freddie Gray turned to hopes for change following swift criminal charges against six police officers. Credit: REUTERS/Lucas Jackson