The wife of Vice President Mike Pence has been a passionate advocate of art therapy for many years, including during her service as first lady of Indiana. Now, she hopes to use her new and loftier public profile to raise awareness of the mental health profession and help change the public’s perceptions about what art therapists actually do.

“They can do things that help the patient have a little more control,” Mrs. Pence told The Associated Press in an exclusive interview.

Art therapists use art, the creative process and the artwork patients create to help them explore feelings, resolve emotional conflicts, manage behavior and addictions, reduce anxiety and boost self-esteem, among other benefits, according to the American Art Therapy Association. A main goal is to improve or restore a patient’s functioning and sense of personal well-being.

Mrs. Pence, an artist whose specialty is painting watercolors of homes and historical buildings, plans to observe European art therapy programs when she accompanies her husband to Germany and Belgium on Friday, his first overseas trip since taking office on Jan. 20. She is scheduled to speak with art therapists in Munich and visit an art therapy program in Brussels.

As Indiana’s first lady from January 2013 until last month, Mrs. Pence visited art therapy programs across the state, as well as in Israel, Canada, Japan and Germany.

The field is growing, but is not well understood, she said. The American Art Therapy Association says it represents more than 5,000 professional art therapists and others related to the profession. 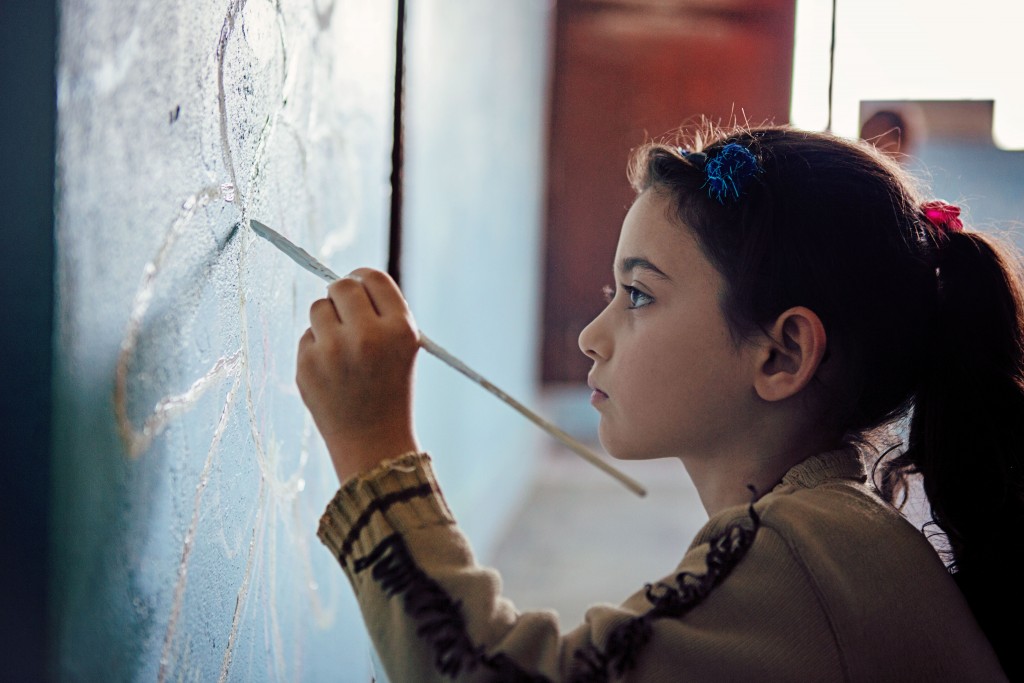 Young Syrian student painting a flower on the walls of her refugee school in southern Turkey. Mural Art was one of the art therapy classes provided during a four-day education program sponsored by the U.S.-based Karam Foundation in Reyhanli, Turkey. Photo courtesy of Karam Foundation

“One thing I can bring to this as second lady is making people aware of what art therapy is and how it works,” Mrs. Pence said. “It’s not arts and crafts.”

Mrs. Pence, a former elementary school teacher, said she was first exposed to art therapy during a visit to a Washington hospital more than a decade ago. Her husband represented Indiana in Congress, and the Pences lived in Washington during his six terms in the House before he was elected his governor.

She has a master’s degree in art education, but learned that art therapy “wasn’t even something that I would be qualified to do.”

Mrs. Pence said art therapy usually is not paid for by insurers, but she doesn’t think it’s her place to use her new platform to try to encourage them to provide coverage.

“I don’t really see my role as policy maker or policy changer,” she said. “I just want to make people aware of what art therapy is.”

She has served on the board of Tracy’s Kids, an art therapy program for youth cancer patients, since 2011. The organization recently honored her with its Courage Award.

As for the return to Washington, Mrs. Pence said it’s been a “pretty smooth transition since we lived in Washington for 12 years.”

“We have friends, we have places we like to frequent and we know the neighborhood” around the vice president’s official residence on the grounds of the Naval Observatory in Northwest Washington. “We’re familiar with Washington. It kind of just feels like we’re coming back.”