The Department of Army has denied a crucial permit to continue construction of the $3.8 billion dollar Dakota Access pipeline. The decision, announced Sunday, officially halts construction of the 1,172-mile oil pipeline about half a mile south of the Standing Rock Sioux Reservation.

The decision is seen as a significant victory for the thousands of “water protectors” who have journeyed to the North Dakota prairie to protest the energy project.

“It’s significant for all of the people that supported us, standing with us,” said Standing Rock Sioux Tribal Chairman Dave Archambault II. “It’s huge. It’s big.”

Archambault made the announcement from the Oceti Sakowin Camp – the sprawling encampment named in honor of the ancestral lands of the Lakota, Nakota and Dakota people.

News of the tribal victory quickly spread from nearby Eagle Butte, South Dakota, the heart of the neighboring tribal community of the Cheyenne River Sioux Tribe. It’s where 42-year-old Remy Bald Eagle announced the Army Corps decision Sunday afternoon where veterans across the country were arriving at the tribal bingo hall.

“It’s surreal,” said Bald Eagle, who said war whoops and laughter could be heard from people learning of the denied permit. The Cheyenne River Sioux tribal leader received a call from the tribe’s chairman, Harold Frazier, who has been engaged in the battle over the Dakota Access pipeline alongside Chairman Archambault.

The Army Corps’ assistant secretary for civil work, Jo-Ellen Darcy, said that after hearing the tribes’ concerns that the risk of an oil spill from the pipeline could affect the drinking water of Standing Rock and millions of other Americans, it became “clear that there’s more work to do.” The federal agency is recommending an Environmental Impact Statement be conducted with full public input and analysis to explore a possible reroute of the pipeline.

Sunday’s decision occurred in the midst of thousands of U.S. military veterans arriving to the wintry high plains to stand in solidarity with the growing movement. Arranged under the “Veterans Stand for Standing Rock” operation, organizers say as many as 4,000 service men and women joined the campaign. The call for support gained momentum in the aftermath of a Dec. 5 Army Corps eviction deadline issued the day after Thanksgiving to pipeline resisters who have been occupying federal lands for months. 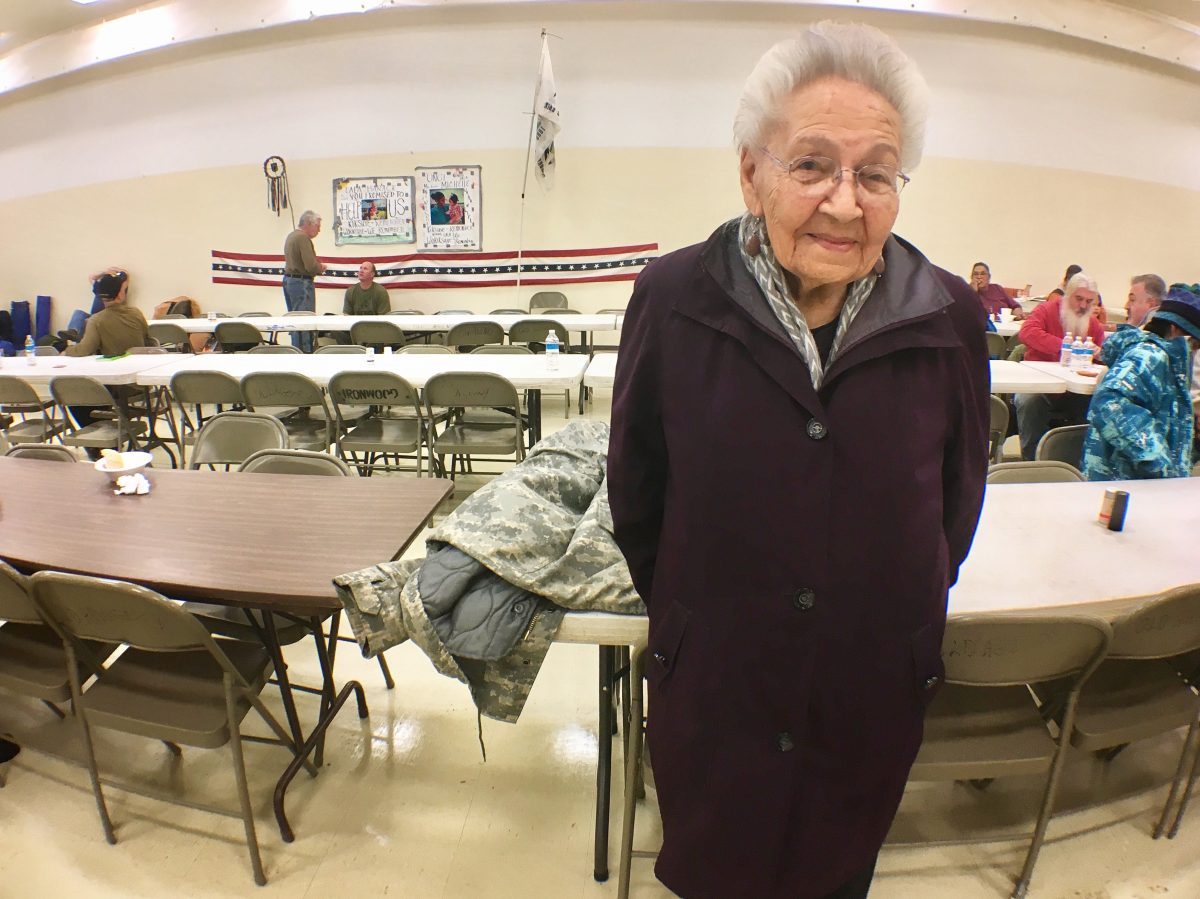 1st Lt. Marcella LeBeau (Lakota) stands in a gymnasium on the Cheyenne River Sioux reservation on Saturday where she greeted thousands of veterans who traveled across the country to stand in solidarity with Standing Rock “water protectors.” The 97-year-old U.S. Army nurse served in World War II from 1944-1947. Photo by Jenni Monet

“Our people were warriors and it’s kinda coming full circle again,” said Marcella LeBeau, a U.S. Army Nurse who served in World War II. The 97-year-old Lakota woman from the Cheyenne River Sioux Tribe is also the great-great granddaughter of Chief Four Bears, or Mah-to-tow-pah, one of several signatories of the Fort Laramie Treaty of 1868. That Treaty, in part, secured lands to the Sioux that were historically taken by the federal government in a series of land seizures.

On Saturday, LeBeau was at the tribal bingo hall to receive thousands of road-weary veterans as they met icy conditions and were forced to stop for the night. “The treaties they say they are the law of the land,” said LeBeau, referring to language used by forebears who signed these historic pacts with Native Americans. “I think all of that will come to surface now and our history will be told.”

What began as a battle to stop the $3.8 billion pipeline from traversing beneath the primary water supply of the Standing Rock Sioux Tribe swelled into a greater movement protesting many issues: corporate greed, police violence and diminishing civil liberties. Many Indigenous Peoples and their supporters say their struggle is also an attempt to start reversing 500 years of colonization and oppression on the very lands that are central to the current standoff.

The battleground now has been intensified by frigid conditions, including freezing temperatures and snow. Those camped out along the confluence of the Cannonball and Missouri Rivers also have had a persistent militarized police presence to face. On Wednesday, more North Dakota National Guard troops were activated to assist Morton County Sheriff’s deputies, bringing the total number of officers to 500. 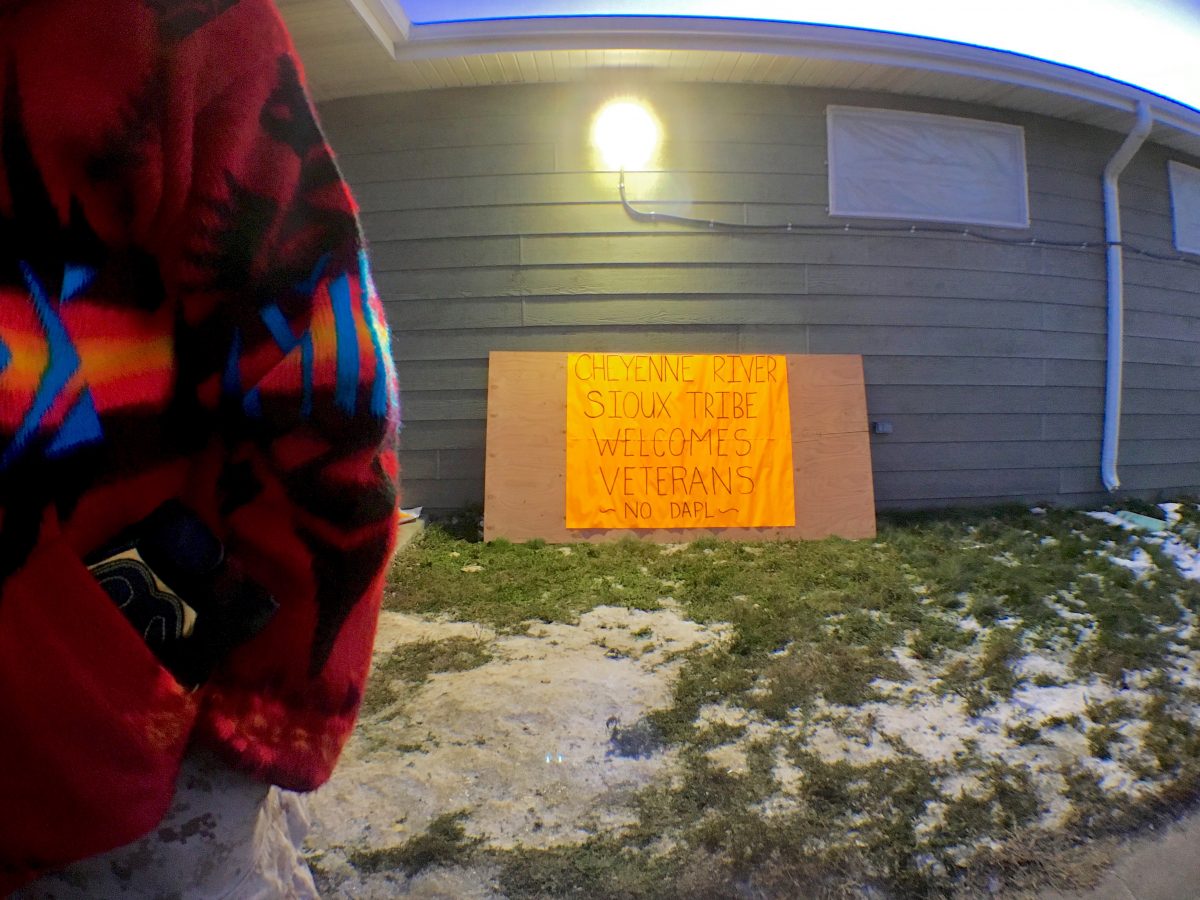 Thousands of veterans joined the Standing Rock Sioux protests against the Dakota Access Pipeline this weekend. Photo by Jenni Monet

The group behind the veteran-support operation pledged to act peacefully to stand in solidarity with the unarmed water protectors.

“Our mission is to prevent progress on the Dakota Access Pipeline and draw national attention to the human rights warriors of the Sioux tribes,” read the group’s operation orders. But execution details also stated an exploitation plan. “If we have a gap in police lines we will maneuver through and head straight for the drilling pad,” wrote the group, referring to the nearby site where pipeline construction continued at the easement of the Missouri River, awaiting final permit approval from the Army Corps.

Energy Transfer Partners did not immediately return calls for comment.

Meantime, the Morton County Sheriff’s Department, which has repeatedly used intense militarized force to respond to demonstrators while guarding ongoing construction of the pipeline replied with neutrality. “I have stated from the beginning that the easement is a federal decision and local law enforcement does not have an opinion on it,” Sheriff Kyle Kirchmeier said. “Our role is to enforce the law and that is what we will continue to do.”

In the past month, clashes between police and the protesters have escalated. Violence has erupted and there have been mass arrests — more than 525 since August. Deputies with the Morton County Sheriff’s Department have repeatedly used rubber bullets, mace, pepper spray and tear gas against activists who insist that they are unarmed. On Nov. 20, hundreds of protesters suffered hypothermia after police hosed them down with water in sub-freezing temperatures.

“The Standing Rock Sioux Tribe and all of Indian Country will be forever grateful to the Obama Administration for this historic decision,” wrote Chairman Archambault in a statement released by the tribe.

But while water protectors and their legion of veteran supporters may be celebrating this latest development, tribal leaders are also remaining pragmatic.

“We hope that Kelcy Warren, Governor Dalrymple, and the incoming Trump administration respect this decision and understand the complex process that led us to this point,” said Archambault in his statement, referring to the CEO of Energy Transfer Partners and North Dakota’s governor.

“A much as we enjoy the warmth of goodness, we still have to keep our eyes on the horizon for bad weather,” said Bald Eagle. “We know that this is only temporary and we know that this fight isn’t over.”

Left: Native American "water protectors" and their allies celebrate that the Army Corps of Engineers has denied an easement for the $3.8 billion Dakota Access Pipeline, inside of the Oceti Sakowin camp as demonstrations continue against plans to pass the Dakota Access pipeline near the Standing Rock Indian Reservation, near Cannon Ball, North Dakota, U.S., December 4, 2016. Photo by Lucas Jackson/Reuters