Ben Bradlee, the former executive editor of The Washington Post who led the paper during its legendary Watergate coverage, died Tuesday at his home in Washington, D.C., the newspaper reported. He had been suffering from Alzheimer’s and dementia. He was 93. 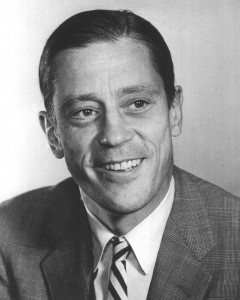 Ben Bradlee oversaw the publication of 400 stories about the Watergate scandal subsequently bringing down the Nixon Presidency. Photo courtesy of The Washington Post

Bradlee ran the Post from 1968 to 1991 overseeing the investigation into the Watergate scandal and the publishing of the Pentagon Papers. The Washington Post won 23 Pulitzer Prizes under his tenure, including one for its Watergate reporting, establishing it as one of the best newspapers in the country.

When Carl Bernstein and Bob Woodward, then two young reporters, first approached Bradlee about a burglary in the Watergate complex the details were murky, but he was certain there was a story:

“Probably the first or second day, really,” Bradlee told the Academy of Achievement about when he first thought Watergate was a big story. “It was strange. You had a lot of Cuban or Spanish-speaking guys in masks and rubber gloves, with walkie-talkies, arrested in the Democratic National Committee Headquarters at two in the morning. What the hell were they in there for? What were they doing?”

So he supported Woodward and Bernstein as they began pursuing leads and took direction from an anonymous source known as “Deep Throat.” They were young reporters, though, without sources on the record. PBS NewsHour’s Jim Lehrer asked Bradlee in 2005 how he knew they were right. 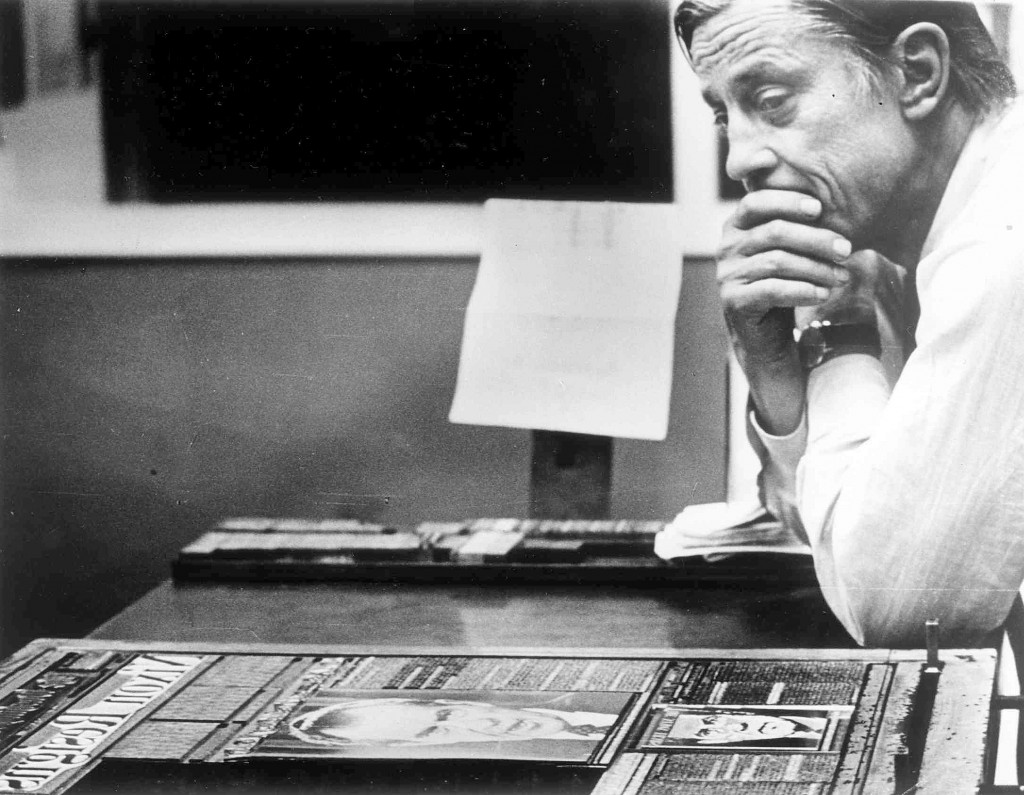 Together they published 400 stories about Watergate over two years and nine months. President Richard Nixon subsequently resigned and The Washington Post won the Pulitzer Prize for Public Service in 1973. When asked what his emotions were when President Nixon resigned, Bradlee said, “That we had really done a really good job. That the difficulties they put up to prevent the trust from coming out have been overcome. That really is what we’re all about.”

Woodward and Bernstein wrote a book, “All the President’s Men,” about their investigation which was then turned into an Academy Award winning film. Jason Robards portrayed Ben Bradlee in the film version, a role that won him an Academy Award for Best Supporting Actor. Below is the film scene where Bradlee (Robards) tells Bernstein (Dustin Hoffman) and Woodward (Robert Redford) about his own experience reporting on J. Edgar Hoover and that he trusts them to run with their story:

In 1971 The New York Times received a copy of what is known as the Pentagon Papers, a study of the political and military history of the United States in Vietnam. The Times began printing the study, but was quickly stopped by a judge order. Ben Bradlee then received portions of the study from Daniel Ellsberg, a former military analyst who leaked the Papers. With the permission of publisher Katharine Graham, Bradlee had the Post begin publishing their own series of articles about the Pentagon Papers. The Post was also asked to stop publishing the information, but refused. Alongside The New York Times, Bradlee took the case to the Supreme Court who ruled in favor of the papers.

“You don’t think of journalists automatically as patriots, one. You don’t think of them as real authorities in the question of what is classified and what isn’t, and what is a threat to the United States and what isn’t. But in fact at that time, we were,” said Bradlee in his interview with the Academy of Achievement. “We were more expert that a lot of the government witnesses who testified against us…most of us had served in World War II and had quite fancy security clearances. So we did, and there was no threat to the national security, and information, truth, is not a threat to security, and we believed that.” 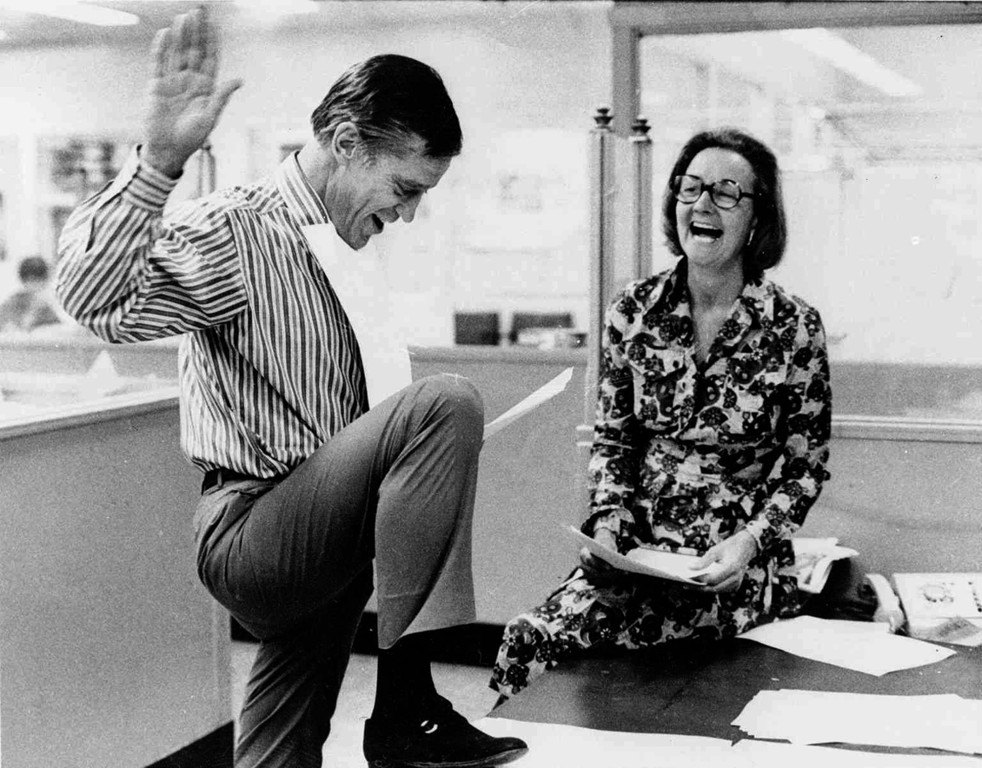 Ben Bradlee and Publisher Katharine Graham in 1971 after winning a Supreme Court ruling allowing continued publication of the Pentagon Papers. Photo courtesy of The Washington Post

Bradlee was born in Boston in 1921 and attended Harvard. He graduated a year early to enlist in the U.S. Navy in 1942. He spent four years at sea during World War II, fighting in more than a dozen Pacific Ocean battles, a service he always took great pride in. In 1984, Bradlee received a letter from a reader questioning the Post’s patriotism after publishing information about a satellite payload over protests from Reagan Administration officials. In response to the reader Bradlee wrote:

I suspect I did more for my country in the war than you did. I spent four years in destroyers in the Pacific Ocean. My theater ribbon has 10 battle stars in it.

When he returned from World War II he became a reporter for a newspaper he helped start in New Hampshire. After a brief stint as the press attache for the American embassy in Paris, he began reporting for Newsweek. While at Newsweek Bradlee developed a strong relationship with then young Sen. John F. Kennedy who lived near him in Washington, D.C. He became managing editor of The Washington Post in 1965 and executive editor in 1968.

He was married three times. In 1978 he married Sally Quinn, a fellow journalist at The Washington Post. Together they have one son, Quinn Bradlee, born in 1982 with Velocardiofacial syndrome.

Quinn first spoke publicly about her husband’s failing health to C-SPAN founder Brian Lamb during an interview taped on Sept. 18. She emphasized that Bradlee remained happy despite his ailments. “Ben has never been depressed a day in his life,” Quinn said to Lamb. “I’ve been with him 41 years and I’ve never seen him depressed, and he’s just very happy … He’s very aware of being taken care of and fussed over and he appreciates that … He’s totally content.”

Bradlee is survived by wife and their son as well as by three children from his previous marriages: Ben Bradlee Jr., Dominic Bradlee and Marina Bradlee.

In November 2013 President Obama awarded Ben Bradlee the Presidential Medal of Freedom, the highest civilian award in the United States. When presenting the medal Obama said, “Since joining the Washington Post 65 years ago, he transformed that newspaper into one of the finest in the world. With Ben in charge the Post unleashed a new era of investigative journalism holding America’s leaders accountable and reminding us our freedom as a nation rests on the freedom of the press.”

Obama also recited a poem Senator Daniel Patrick Moynihan wrote for Bradlee when he retired from the Post:

In 2006 Bradlee sat down with PBS NewsHour’s Jim Lehrer to discuss his career and journalism for a PBS documentary, “Free Speech.” Lehrer asked Bradlee about being hopeful in an occupation often seen as cynical and pessimistic.

“Yes, I mean, it changes your life, the pursuit of truth,” said Bradlee. “And at least, if you know that you have tried to find the truth and gone past the first apparent truth towards the real truth, it’s very exciting.”