Hundreds of students across the country left class Wednesday to protest the nation’s gun laws. It was a show of solidarity with students from Marjory Stoneman Douglas High School in Parkland, Florida, where last week a gunman shot and killed 17 students using an AR-15 rifle.

The message: It’s time for action.

The students flooded social media with photos and videos from the demonstrations, along with calls to action for planned walkouts on March 14, the one-month anniversary of the shooting in Parkland, and April 20, the 19th anniversary of the deadly high school shooting in Columbine, Colorado. More than 125,000 students have signed onto a change.org petition for an April 20 walkout.

The message — it’s time for action — was the same at a listening session at the White House, hosted by President Donald Trump, which brought together survivors of the Parkland attack along with parents and community members from the Columbine and Sandy Hook school shootings. There, the president vowed to be “very strong on background checks” and suggested he would consider concealed carry for some school employees, among other solutions.

Here’s a look at some of the walkouts and protests around the country Wednesday.

Hundreds of students flooded the Florida state capitol on Wednesday, led by about 100 survivors from Marjory Stoneman Douglas High School, who made the 400-mile journey by bus.

More than 500 other students from around the state marched to the statehouse steps, according to the Associated Press. On Wednesday evening, some of them staged a sit-in in the offices of Republican lawmakers, the AP reported.

Yesterday, the Florida State House refused to consider a bill that would ban assault rifles, provoking an emotional reaction from Stoneman Douglas students who were in the chamber.

Students from Marjory Stoneman Douglas High School react as they watch the #Florida House of Representatives vote against bringing a bill to the floor that would ban assault weapons on Feb. 20, 2018. Sheryl Acquaroli, Ashley Santoro and many of their classmates traveled to Tallahassee to lobby lawmakers for stricter state #gun laws. Photos by Colin Hackley/Reuters #guncontrol #guns #floridashooting

Students from other high schools in Broward County formed hearts on football fields.

Chicago-area high schools also saw walkout protests led by students. At Schaumburg High School and Oak Park and River Forest High School, students led marches out of class. In Oak Park, students rallied in front of the school and some parents also showed up in support.

“We really need to update today’s laws,” Oak Park and River Forest High School senior Connor Hartweg told the Chicago Tribune. “Our government isn’t doing that. If we can’t lean on them to do it, then we’ve got to be that change.”

Students are walking out of Schaumburg High School to demand stricter gun control laws, in solidarity with students in Parkland, Florida.

Hundreds of middle school and high school students from Virginia, Maryland and Washington, D.C., flooded the grounds of government buildings Wednesday. Some students from Rockville, Maryland, left school to demonstrate in front of the White House and on Capitol Hill.

Students from McLean High School in Virginia sat and chanted outside the White House.

“We want change!” “Now!” The scene outside the White House, where about 100 students from McLean High School in VA ended up after walking out of class to protest gun violence: pic.twitter.com/sveYxhaIUP

“Some sort of common sense gun control legislation needs to be passed into law because far too many innocent people have been killed because of the easy and overwhelming access to firearms in this country,” Rockville student Daniel Gelillo told ABC News.

I'm 18 and can vote, says senior James Brady, who walked out of his Virginia high school today alongside his classmates, demanding #GunReformNow #wakefield #StudentWalkout @NewsHour pic.twitter.com/CuNT1Hx7MO

Officials told the Austin Statesman that around 500 students participated in walkouts Wednesday.

A Houston-area superintendent threatened to suspend students who walked out of class to protest gun laws, according to the Houston Chronicle.

Across Ann Arbor, high schoolers left class for between 17 minutes and 30 minutes in memory of the students killed at Stoneman Douglas High School, local media reported.

“We had a lot of death in Ann Arbor last year, students-wise. … Each one of those lives affected the entirety of Ann Arbor,” Bree Linton, 17, a senior at Community High School told MLive. “I can’t imagine 17 in a few hours, all from one kid.”

Students in the Cleveland suburb of Lakewood, Ohio, also staged a protest rally in front of the school. 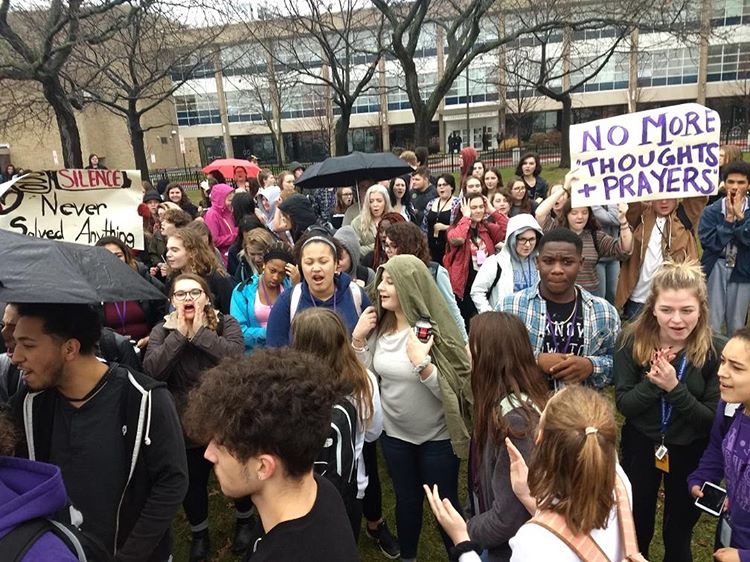 STUDENTS MARCHING across the country.

Take a look. (This thread)

Left: Students who walked out of their Montgomery County, Maryland, schools protest against gun violence in front of the White House in Washington, U.S., February 21, 2018. Kevin Lamarque/Reuters