How to navigate the Santa myth

When I became a parent 10 years ago, I made this deal with myself: No matter how uncomfortable it might be at times, I would always tell my child the truth. Way too often, it seemed, parents risked the trust of their children by telling them lies — white lies, black lies, all the lies — and rarely were any of them really necessary or justified. Plus, honesty was a value I wanted to model.

That worked out great until Santa Claus came along and screwed everything up.

I don’t remember when my daughter, Maxine, first heard about Santa. Chances are good I wasn’t even aware of it. The symbol of “the spirit of Christmas” is steeped in our culture. As an American child, there was no way Maxine was going to miss the Santa boat.

When I became a parent 10 years ago, I made this deal with myself: No matter how uncomfortable it might be at times, I would always tell my child the truth. That worked out great until Santa Claus came along and screwed everything up.

Still, it takes parental support to keep the Santa boat afloat, right? Parents buy the gifts; parents fill the stockings; parents take their kids to the mall to sit on Santa’s lap; parents help pour the milk so the kids can make sure Santa is greeted warmly when he shimmies down the chimney at night. And, if I didn’t want to burst the little bubble implanted in Maxine’s head by society, I was going to have to do what I said I wouldn’t: lie.

I’m not the first to have mixed feelings about Santa Claus. In his 1993 book, “The Trouble With Christmas,” Tom Flynn laid out five main arguments against engaging in the Santa myth with children:

1. To perpetuate the Santa myth, parents must lie to their kids.

4. The myth makes kids more acquisitive, not less so.

5. The myth appears to exploit age-appropriate cognitive patterns that religious children use in forming their ideas of God.

Although I think there’s a whole lot of exaggeration in Flynn’s list, some of his points hit close to home. So it was with great relief that I read a second essay written by author Dale McGowan, who argued that “figuring out that Santa is not real” is a wonderful rite of passage for children, as long as parents tread lightly around the myth, and stay alert for the first hints of skepticism.

“I avoided both lying and setting myself up as a godlike authority,” McGowan wrote, “determined as I was to let [my son] sort this one out himself.” Then, when McGowan’s son was 9 and asked point-blank whether Santa was real, McGowan turned the question around: “What do you think?”

“Well,” his son answered, smiling. “I think all the moms and dads are Santa. Am I right?”

McGowan smiled back and told the truth — and his son was no worse for the wear.

Since then, I have come to see the Santa myth as a perfect opportunity for Maxine to hone her critical thinking skills, to sift through evidence, separate out what makes sense from what doesn’t, and come to her own conclusions.

Through the years, I’ve helped Maxine set out cookies for Santa and address letters to the North Pole. I’ve proclaimed that “Santa must have come!” when she has found her stocking bulging Christmas morning. But I’ve also made sure to expose her to evidence pointing to the truth. (Many books and movies provide evidence; so do the opinions of older/wiser children.) I’ve never rationalized the inconsistencies that exist within the Santa myth — why every mall has its own Santa, how Santa gets around the world in one night, or why some poor children don’t have toys on Christmas morning. I called it doing “Santa Lite” — passively supporting the myth without making overt statements about the truth of Santa’s existence.

I knew our Friend in Red was living on borrowed time, and I worried that, when the jig was up, she might feel sad about losing him — or, worse, feel betrayed that we had misled her.

Last year, when Maxine was 9 and clearly teetering on the precipice between belief and non-belief, I put together a special gift for her. It was a box containing her favorite Christmas decoration — a vintage curio I’d inherited from my mother — along with an assortment of her favorite candy. A note on the box said: “For Maxine — when you discover the ‘truth’ behind the mystery. Congratulations!” I knew our Friend in Red was living on borrowed time, and I worried that, when the jig was up, she might feel sad about losing him — or, worse, feel betrayed that we had misled her. I hoped the gift might soften the blow.

I stowed the box on a shelf in our garage — awaiting the day it would be needed.

That day, as it turned out, was earlier this month.

Having just returned from a trip to Colonial Williamsburg for Thanksgiving, Maxine was trying out a feather quill pen for the first time. I watched her write, “Dear Santa…” on her paper, and then I watched her stop, look at me, and take out a new piece of paper. “Is Santa real?” she wrote in the messy ink. Then she looked at me again, awaiting an answer.

I hesitated, during which time she picked out a new piece of paper and wrote: “Please tell me about it. I do not want to find out alone.” 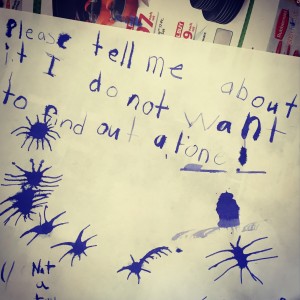 I went straight to the garage.

Then I explained to her that Santa is not a person, but an idea. Mom and dads and grandmas and grandpas are all Santa. And, now, she would get to be Santa, too. I gave her the gift, and she opened it. “I remember this!” she said when she saw the curio. And then: “Candy!”

We emphasized how important it was to keep the Santa mystery intact for other children, and my husband, Charlie, pulled up the famous (and famously wonderful) editorial from The Sun on his phone. You know the one — “Yes, Virginia, there is a Santa Claus.” Written in 1897, the editorial is ridiculously on point and surprisingly poignant.

The candy, unfortunately, had gone completely stale. “When did you buy this stuff?” Maxine asked, presenting me with a calcified gummy bear. I laughed. “Last year!”

I searched Maxine’s face for signs of disappointment, but there were none. Instead there was relief (she finally knew the truth), pride (her pressing curiosity had paid off), and excitement (now she would get to help keep Santa “alive” for her younger cousins).

Plus, there was candy. New candy.

It was the the least we could do after lying to her all these years.

Editor’s note: This article is updated from a column that we ran on December 15, 2014.

Left: Santa Mark, a Santa Claus impersonator from Ansonia in Connecticut, sits in Times Square in the Manhattan borough of New York City on November 28. Photo by Reuters and Andrew Kelly