What it’s really like to be an Uber driver

Editor’s Note: Uber has revolutionized ground transportation, with lower rates, convenient mobile phone technology and much faster pick-up times than taxi cabs. But as we reported on Making Sen$e Thursday, Uber has also disrupted much of the taxi industry, threatening some companies’ very existence and the livelihood of their drivers.

For its own drivers, though, Uber has innovated a new kind of work, especially for part-timers looking to make extra money driving their own cars with UberX. They can drive on their own schedules as often as they want.

With Uber cutting rates and taking higher commissions, though, not all drivers are making as much as they want — or would need to if they were to turn driving into a full-time gig. Making Sen$e producer Diane Lincoln Estes spoke with three drivers about their experiences. Bob and Kim, whom Making Sen$e found on the Uber Drivers Forum, wish to be identified by their first names only.

Bob is an independent software development consultant who’s been driving on the side for Uber and Lyft over the past couple of months.

Diane Lincoln Estes: How do you like it so far?

Bob: It’s good as a part-time gig. It allows me to make a few extra bucks to pay off some student loans, and I get to set my own hours, so you know, flexibility is wonderful.

Diane Lincoln Estes: How many hours a week would you say you spend driving?

Bob: Before the rate cuts, about 20 hours a week. Now I’d say it’s more like 10 to 12. It was lucrative in the beginning, when I first started, [but] now with the rate cuts, you basically break even. With some rides, you might actually be losing money. So, the money’s just, you know, not there — and you’re putting wear and tear on your car. For me, it’s not worth it to do so many hours.

Diane Lincoln Estes: But it is worth it for you to do fewer hours?

Bob: Yeah. I do the more peak times, when it’s prime time, when there’s a surge, that basically is worth it.

Diane Lincoln Estes: How would you describe the relationship between Uber and its drivers?

Bob: Well, it’s very standoffish. They’re not very easy to get a hold of. Everything that we do is via email. A lot of the questions that we’ll ask may be dealing with specific things, and you’ll get back a canned response, multiple times. So, you know, their communications in some ways could be improved. They have a lot of great customer service reps — they are very friendly at times — but you know, there are areas that could use some improvement.

Bob: This was before my time with Uber, but in the beginning, the line on their website was that “tipping was included.” And now the change to that has been that “tipping is not necessary.” So we’re sort of not allowed to accept tips? But we can ultimately. Their line is that we can, once we decline it the first time, if the customer insists, then we’re allowed to accept a tip.

Diane Lincoln Estes: How does the driving experience compare to what you’d expected?

Bob: The driving experience is not bad. I mean, one of the reasons I do this is because I just like to drive; it’s a natural hobby of mine to drive, so getting paid to do it is just a plus.

Most of the passengers are fairly reasonable that I’ve had. Uber set up really high expectations for their service, and originally they started with their Uber Black product, and now I drive Uber X, which is their lower-end product. But they never really made a distinction for the buying public between the two. So people expect black service at the Uber X prices, which includes having a nice car, a new model car, things like providing water and snacks, for instance, even. But at what we’re getting paid right now, it’s not feasible to do all those things. But as far as passengers go, some of them have expectations.

Diane Lincoln Estes: What’s your opinion of the rating system?

“Unfortunately, a four-star review on Uber’s system is a vote to have the driver fired.”

Bob: Here’s my problem with the ratings system. Uber doesn’t educate its passengers as to what the rating system means, and how they should be applying it. And I understand it’s perfectly reasonable in a five-star rating system to reserve your fifth star for the best situations, you know? Michelin stars for example. A four-star review in any normal situation would seem great! And, unfortunately, a four-star review on Uber’s system is a vote to have the driver fired. Basically you’re expected to get a 4.6 average, and if you go below that, you’ll get a warning before they quickly deactivate you.

Uber discourages us from discussing these things with passengers. They expect passengers, I guess, to just know these things. And I feel each passenger out, to see how they’ll take to me talking about the ratings. Some people don’t like to be told how they should rate you.

Bob: My rating is actually 4.81. I’ve been working really hard and it’s been slowly building up. When I first started, my first weekend, I had a few rookie mistakes [that] brought me down to something close to probably a 4.4. But as you gain more experience, you compile more ratings so that the average goes up. 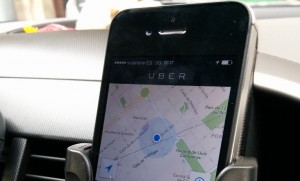 Diane Lincoln Estes: What were your rookie mistakes?

Bob: I picked up a passenger from a bar, at closing time, and she slurred her destination, and I didn’t quite understand what she said. She said it’s close, and “I’ll direct you.” And so, she told me to make a left, and then another left, and I’m going down a main street, basically, for a bit. And it dawns on me, like, after she was silent for a while, that maybe I should check on this woman, but I didn’t want to be obvious about it, and get all in her face, so I let it go for a few more blocks. Unfortunately, she had fallen asleep in the back seat, and therefore I had passed her destination by quite a few blocks. I woke her up, explained the situation, we turned around and got her to her destination fine, but the fact that we went out of our way a little bit — she basically dinged me with a low rating, and that I had to build up from.

Diane Lincoln Estes: Do riders have all the power here?

Bob: I think they have a larger balance of the power, absolutely. Uber is very rider-focused just because they’re trying to grow the company. Sometimes we have to give the rider the benefit of the doubt, and they won’t come to us, the drivers, for our side of the story, for instance. If they dispute a fare, or if they have any dispute in general, Uber will be very quick to refund their money and pull it right out of our pay.

Diane Lincoln Estes: Do you think that will hurt Uber?

Bob: I think it might hurt them. [But,] unfortunately, as long as they still have a supply of fresh drivers that are willing to take whatever pay they can, and get into sort of whatever deal they unfortunately get into, then it’s just not going to stop any time soon.

Diane Lincoln Estes: Are you going to continue driving?

Bob: I will continue driving absolutely. I still like doing this, and I’m not losing money. Unless there’s another fare cut, which would mean I would be operating at just about break even point. So, then it wouldn’t be worth it.

Diane Lincoln Estes: How do you think Uber compares to traditional taxis?

Bob: Depending on which number you listen to, it’s 30 to 40 percent cheaper than a taxi. Our cars are usually superior to a taxi. We’re there in less than five minutes, maybe as high as 10 minutes. You can almost not compare them. A taxi dispatch may take 20-30 minutes if they show up at all. We provide a service that is just light years ahead.

Diane Lincoln Estes: Would you ever work as a taxi driver?

Bob: No, I have no interest. In order to make money in that business, you have to work 50, 60, 70 plus hours a week because there’s all these separate costs that are involved.

Bob: Besides the rating system, there’s also a commission structure that Lyft has where the more hours you work, the less commission you pay. So it’s the same 20 percent commission at the start. But for 15 hours, it goes down to 15 percent commission. And basically, if you work the fullest shift, which is 50-plus hours on Lyft, you pay zero commission. It’s a brilliant system. It’s something Uber should consider, however, for new people in San Francisco, Uber just raised their commission up to 25 percent.

“There’s a lot of people in communities that have higher unemployment and are willing to do more for a dollar than your typical person.”

Diane Lincoln Estes: And yet, they’re not hurting for drivers.

Bob: There’s a lot of people in communities that have higher unemployment and are willing to do more for a dollar than your typical person. And so, there’s a steady stream of drivers who are just willing to sign up. I do believe that a lot of those drivers probably stop working shortly after they start.

Editor’s Note: Kim is also concerned about the commissions Uber takes. She has a full-time day job, but drives about 10 hours a week for Uber. She understands that rate cuts make the service attractive to riders, but she doesn’t see how that’s sustainable for drivers if Uber maintains the same commission percentage.

Kim: It’s an $18 billion dollar company. They can certainly make a very handsome profit by having fair and equitable relations with their partners, the drivers. We make money for them by driving on their behalf. I just would encourage them to keep the compensation in a place where drivers want to drive, where drivers can make a living wage driving.

Unlike Bob and Kim, Catherine Purcell, whom Uber recommended to us, quit her day job in the mortgage industry to drive with Uber full-time. But what she loves about it is that she decides what “full-time” means and when she wants to work. She admits that she, too, has had to increase her load since the rate cuts, but she thinks it’s a smart strategy to get riders addicted to Uber.

Catherine Purcell: I was in the mortgage banking and real estate industry for 28 years, and six weeks after I started driving Uber, I walked into the office and said, “See you guys! I’m done.”

Diane Lincoln Estes: How do the two gigs compare?

Catherine Purcell: Uber is just tons of fun. I mean, you meet incredible people, most of them are 18-35 years old. We’re starting to see a few of the older generation using the service. I have a great time. And I like to drive anyway. With Uber, you can turn it on and off whenever you want, so there’s nobody telling you you have to work, or you don’t have to work. So if you’re tired, you just don’t work.

Diane Lincoln Estes: So about how much do you make?

Diane Lincoln Estes: So how does what you’re making now compare to what you were making when you were in the mortgage industry?

Is the traditional taxicab an endangered species? Watch Paul Solman’s report below.