What the Founding Fathers believed: Stock ownership for all 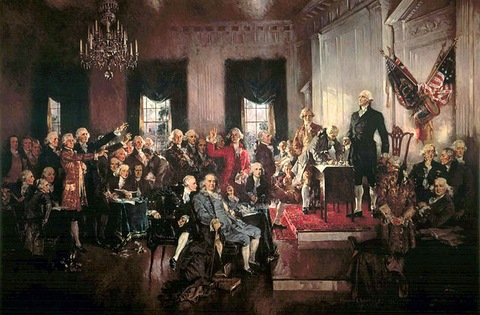 Citizen ownership, often demonized as “socialist,” has a pedigree dating to the American Revolution. “Scene at the Signing of the Constitution of the United States,” oil on canvas by Howard Chandler Christy, 1940, via Wikipedia Commons.

But as Joseph Blasi of Rutgers and Richard Freeman of Harvard emphasize in Friday’s post, worker ownership is as new as fracking, but as old as America itself. George Washington, a slave owner, remember, believed that broad-based worker ownership would ensure “the happiness of the lowest class of people because of the equal distribution of property.”

These and other rather surprising facts are in Blasi, Freeman and co-author Doug Kruse’s new book, “The Citizens Share,” which Freeman told me about recently when I interviewed him for the NewsHour.

“The Alternative American Dream: Inclusive Capitalism.” That was the headline of an extremely popular post on our Making Sen$e Business Desk by long-time worker ownership activist Chris Mackin this summer.
Now, Freeman and Blasi, in a sense, follow up.

Richard B. Freeman and Joseph R. Blasi: The fact is indisputable: productivity — output per worker — nearly doubled over the past 30 years. Yet the real pay of most workers increased much more slowly, and the hourly pay of many groups of non-supervisory workers barely budged at all. So what happened to the gains of higher productivity?

They showed up in an increased share of income accruing to owners of capital and in the pay of top earners, whose compensation consists disproportionately of — guess what? — stock options and stock grants that give them a share of the increased growth and income that comes from capital. The net result of this shift has been the well-documented increase in the wealth and income of a small number of Americans and American families, while the income and wealth of most Americans has grown little, if at all. 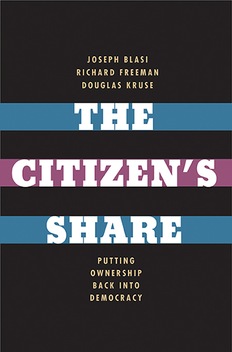 As a result, a larger social problem looms: high-rising inequality is transforming the U.S. from an economy and polity based on a broad middle class to a feudal society dominated by a small number of super-wealthy “lords of the manor.”

Reading through the original arguments for a United States of America suggests that this level of inequality threatens not only our economy — who will buy what the wealthy produce? — but the health of our democracy as well. One does not have to be a modern radical to worry. Back in the 1770s, the Founding Fathers worried deeply about the dangers to the new democracy of concentration of wealth.

James Madison warned that inequality in property ownership would subvert liberty, either through opposition to wealth (a war of labor against capital) or “by an oligarchy founded on corruption” through which the wealthy dominate political decision-making (a war of capital against labor). John Adams favored distribution of public lands to the landless to create broad-based ownership of property, then the critical component of business capital in the largely agricultural U.S. Current levels and trends in inequality would almost certainly have terrified the founders, who believed that broad-based property ownership was essential to the sustenance of a republic.

If increasing inequality is indeed as dire a problem as the Founding Fathers imagined, what, if anything, can the U.S. do to reverse the pattern and to assure that in the next three decades, all of us share in the benefits of modern technology and economic progress? What is the best way to avoid Madison’s dark scenarios?

The standard economic solutions from the right and left are either to raise or lower taxes; to increase or decrease social welfare expenditures; to invest more or less in education or infrastructure; to clamp down or loosen up on business. But none of them addresses the essence of the problem: the huge concentration of capital ownership and capital income.

We propose a new strategy: to expand capital ownership and capital income for normal workers through programs that encourage broad-based employee stock ownership of firms, widely available profit-sharing, and all-employee stock options and stock grants in firms that now restrict ownership, stock options and bonuses to only the highest-level executives. (More active pension fund investments, more active institutional investors economy-wide and reforms in corporate governance are also needed to address what we could call the ownership gap, but we’ll save them for another day.)

The economic benefit of increasing workers’ shares of the income earned by their employers jumps out in the data. On average, workers produce more in those firms in which they have a stake and in which they participate in workplace decision-making than in those in which they are merely hired hands. To be sure, worker ownership of shares and of the stream of returns through profit-sharing or gain-sharing or other forms of shared capitalism does not always produce better outcomes, any more than medicines cure all diseases. But empirical evidence reviewed in chapter five of our new book shows that on average, ownership and decision-making based on all employees owning a stake in performance beats out hierarchical economic structures dominated by the few. Technical aficionados will find details in “Shared Captialism at Work.”

One way to avoid the danger of inequality subverting democracy, then, and at the same time to improve corporate America’s overall economic performance, is to create tens of millions more citizen capitalists by giving workers stock in their companies — enough to focus their efforts on improving firm performance. In short, we favor employee stock ownership based on grants of stock to broad-groups of workers rather than workers buying shares with their wages or savings.

Our new book, “The Citizen’s Share,” makes the economic case in greater detail. It references the detailed scholarly studies that underlie our conclusion. It directs attention to individual firms that reward workers with different forms of capital and notes that these firms are disproportionately among Fortune Magazine’s “Best Places to Work,” among the star performers in the industry in which they primarily operate, and they play important roles in high technology industries (think Google).

But in researching the book, the biggest surprise was that citizen ownership — often stigmatized as “socialist” or pie in the sky — has a pedigree stretching back to the American Revolution. And it wasn’t just James Madison and John Adams. Other be-wigged early presidents of the U.S. and half the crew on Mt. Rushmore — George Washington and Thomas Jefferson — believed that U.S. democracy would work best if citizens had a broad-based ownership stake in the economy. They too feared that extreme property inequality would prevent America from fulfilling its promise. 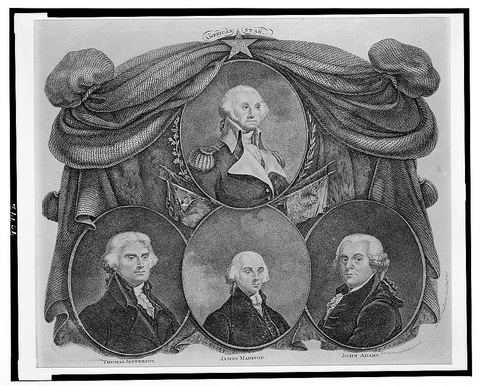 Madison wrote in a letter on voting that “the owners of the country itself form the safest basis of free government” and stressed “the universal hope of acquiring property.” Washington, in a letter on immigration,
said broad-based ownership would insure “the happiness of the lowest class of people because of the equal distribution of property.” Adams favored “preserving the balance of power on the side of equal liberty and public virtue (by making) … the acquisition of land easy to every member of society.”

Jefferson wrote to Madison that “legislators cannot invent too many devices for subdividing property.”

Even Alexander Hamilton, favorite of the moneyed interests, argued that few people wanted to be wage laborers only, and he believed, like Henry Ford centuries later, that a strong middle class was needed to become energetic customers of businesses in the entire economy.

This view showed up in policies. Washington gave tax incentives to New England cod fishers to rebuild their fleets after the Revolutionary War on the condition that the captains and the crew sign contracts ensuring broad-based profit sharing among all workers. He also favored grants of substantial land to veterans of the Revolutionary War to make them into self-sufficient property-owners. Jefferson made the Louisiana Purchase to allow for more land ownership by citizens. The founders also sought to outlaw primogeniture, the practice whereby all property was inherited by the first-born son, the underpinning of feudal economies throughout Europe.

Since the early days of the U.S., land was the main productive asset. Administration after administration provided inexpensive land to citizens. The Northwest Ordinance of 1787 allowed citizens to cheaply acquire land in what would become Ohio, Indiana, Illinois, Michigan, Wisconsin and a third of Minnesota. Throughout the first half of the 19th century, the Federal government sold large plots to citizens at low prices, often using installment loans, and foregoing federal revenue to do so. Under President Abraham Lincoln, Congress enacted the Homestead Act of 1862, which gave 600,000 citizens access to about 100 million acres of land in 160-acre plots if they lived on the land and improved it. States such as Texas and Florida implemented generous state homestead acts. And most significantly, for our argument, the Republican Speaker of the House of Representatives, Pennsylvania Rep. Galusha Grow, who managed the Homestead Act through the Congress for Lincoln, believed that the future of the homestead idea was in workers owning shares of corporations.

The extraordinary success of farming and economic shift toward manufacturing and services changed the main form of productive capital in America, from land to business capital — machinery and equipment, stores with stocks of goods, and yes, Mr. Hamilton’s beloved financial capital as well. But to share in the income generated by business capital, workers needed ownership stakes in the firm. Some famous industrialists — Charles Pillsbury of the Pillsbury Flour Mills, William Cooper Procter of Procter & Gamble, John Rockefeller of Standard Oil, George Eastman of Eastman Kodak (who invented the broad-based stock option idea in high-tech companies in the 1920s) — developed low-risk ways for employees to acquire corporate shares of their companies’ stock or profits.

In 1956, the Employee Stock Ownership Plan (ESOP) was invented by economist and corporate lawyer Louis O. Kelso as a way for the workers of a privately owned newspaper chain to buy out its owners. In 1974, as part of the Employee Retirement Savings Act (ERISA), Congress instituted tax incentives for corporations to grant workers shares of stock.

In other words, while the idea of reducing inequality and improving economic efficiency by giving workers a greater ownership stake in their firm may sound radical in the context of today’s partisan battles in Washington between capital and labor, history shows that it is in fact firmly rooted in U.S. tradition. In a world in which capital’s share of income has risen, and top earners gain much of their “labor income” from capital, it is far more sensible to expand the proportion of Americans with capital income than to engage in destructive ideological battles pitting capital against labor.

“The Citizen’s Share” sketches out specific policies that can encourage greater employee stock ownership. It opens the door for others to present their ideas about how private companies can develop innovate ways to increase ownership by their employees and how government can use taxes and other policies to better incentivize corporations to consider such plans or to expand current plans. Restructuring the tax code should include provisions to broaden the citizens’ share of the country’s business stock.

Our forefathers, George, John, Tom, James, and even Alexander, would, we believe, approve of this path for overcoming the danger to the country of wealth inequality. The Constitution begins, “We the People,” not “We the Billionaires.” We will better preserve or restore the reality of “We the People” if more of us have an ownership stake as well as work stake in our economy. The founders believed that a democratic republic required wide ownership of property and a bustling middle class to ensure its very existence.