What we know about the Gilroy shooting

At least three people were killed and more than a dozen were injured Sunday when a person opened fire at the Gilroy Garlic Festival in northern California.

Gilroy Police Chief Scot Smithee said at a news conference Sunday night that the gunman was shot and killed by police at the festival. Some witnesses have reported there might have been a second suspect, but law enforcement has not confirmed whether that suspect exists or what role that person might have played.

Police say the investigation into the shooting is ongoing and plan to update the public as more information becomes available. Here’s what we know.

At 5:41 p.m. PST, there were reports of gunfire on the north side of the Gilroy Garlic Festival, a three-day event that has been held annually since 1979 and draws in about 100,000 people each year.

Sunday was the last day of the three-day event held in the city of Gilroy, which has a population of about 58,000 and is located 30 miles southeast of San Jose.

Police said it appears the suspect was shooting at random.

Officers were in the area and responded to reports of the shooting within a minute, police said. Upon seeing the officers, the main suspect began shooting at three police officers who then returned fire, killing the man. 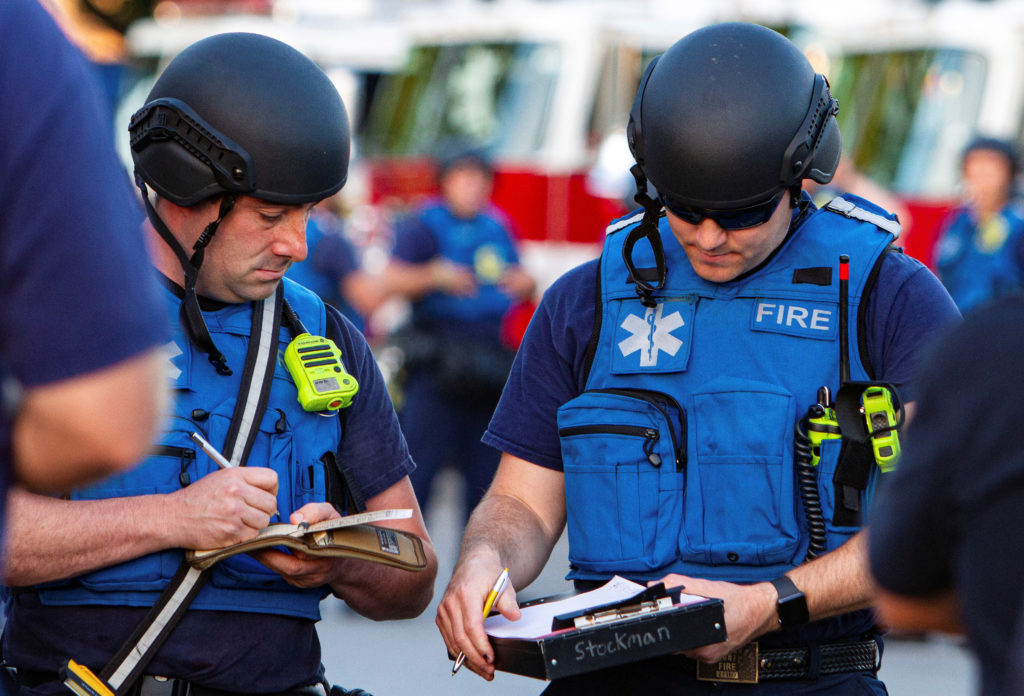 Emergency personnel work at the scene of a mass shooting during the Gilroy Garlic Festival in Gilroy, California, July 28, 2019. Photo by Chris Smead/Reuters

First responders and emergency management officials from 20 different agencies across Santa Clara and Monterrey County came to the scene after the Gilroy Police Department put out a call for help.

One of the victims died after being transferred to St. Louise Regional Hospital. The two others appeared to have died at the scene.

The father of the 6-year-old boy confirmed to the media Monday that his son was one of the victims.

“My son had his whole life to live and he was only six. That’s all I can say,” the boy’s father Alberto Romero, told NBC Bay Area news.

The Santa Clara County Coroners Office identified Salazar as being from San Jose, California. Friends described her as a “caring person.”

Keuka College confirmed Monday that Irby was a biology major and 2017 graduate of the school located in New York state.

“We are shocked that this latest episode of senseless gun violence resulted in the loss of one of our recent graduates—graduates in whom we place so much hope because of their potential to create a brighter tomorrow,” Keuka College President Amy Storey wrote in a letter.

The school plans to hold a campus vigil for Irby “when the timing is appropriate.”

The wounded, who ranged in age from six to 12 years old, were taken to nearby hospitals, including Santa Clara Valley Medical Center and St. Louise Regional Hospital.

A spokesperson from the Santa Clara Valley Medical Center told reporters Monday that 11 people total were treated for gunshot wounds. Another eight were treated for other injuries that appeared to be sustained when they were fleeing.

St. Louise transferred two of its patients to Santa Clara Valley Medical Center and discharged all others that were admitted. Some patients were treated but never admitted to the hospital.

Santa Clara Valley Medical Center is still treating five patients. One of the patients is currently in critical condition, one is in serious condition and one is in fair condition, spokesperson said. The two other patients do not want their information to be made public.

Police said he used an imported variant of an AK-47 assault rifle that he purchased legally July 9 in the state of Nevada. His motive is not known.

Multiple media outlets have reported that Legan had posted on Instagram shortly before the shooting. The now deleted account included only three posts. A photo of Smokey the Bear next to a sign that said “Fire danger high today!” Legan wrote in the caption that people should read “Might is Right,” a book by Ragnar Redbeard that was published in the 1800s and argues moral authority is stablished by force rather than by inherent human rights. The caption spoke disparagingly about “mestizos” and white people.

Police said at a news conference Monday afternoon that they have located the suspect’s car and served a search warrant for his residence.

Law enforcement officers are looking into the possibility of second suspect based on witnesses’ accounts.

“We’ve gotten multiple reports that there may have been another person with him. Different people give different versions so we really don’t know at this point,” Smithee said at a news conference Monday. He added that, even with the unknowns, the area was “very secure.”

There was a significant police presence at the festival, including a bag inspection and metal detection using wands.

“We have very tight security for getting into the festival,” Smithee said at a news conference Sunday.

But police said the suspect appeared to bypass the security by cutting through a fence that was near a creek and a parking area.

Police were stationed in various areas throughout the festival grounds, which Smithee said allowed officers to respond to the shooting quickly.

The police set up an area where families could meet if they were separated during the incident. 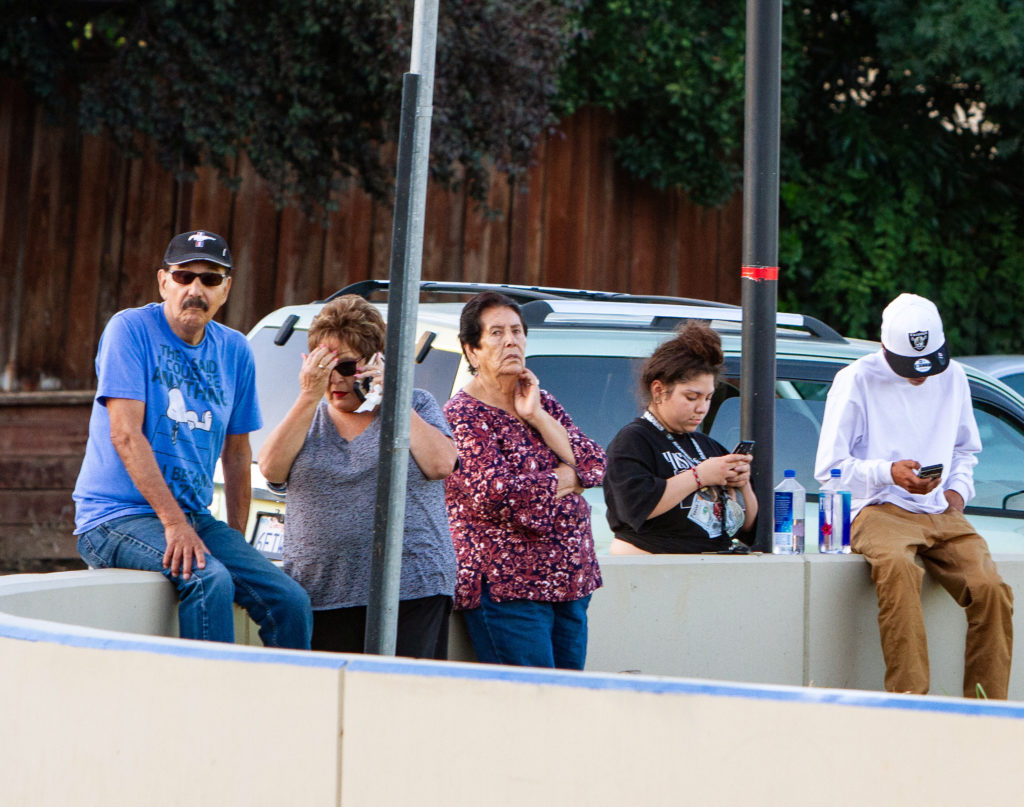 People look on from near the scene of a mass shooting during the Gilroy Garlic Festival in Gilroy, California, July 28, 2019. Photo by Chris Smead/Reuters

The Gilroy Police Department also set up a hotline (408-846-0584) that families could call if they need information about their family.

The Gilroy Unified School District is offering counseling for students, staff and community members affected by the shooting.

The district attorney’s office, along with other agencies, is also opening up a family assistance center for victims and their families.

The FBI has joined local police to investigate the shooting. The FBI deputy special agent in charge, Craig Fair, said the crime scene spans “many acres” so the investigation will take some time.

Gilroy police typically wear body cameras, but it is unclear how many officers were wearing them at the time of the shooting or whether they were recording.

Law enforcement is encouraging any witnesses who have not talked to the police to call 408-846-0583 and provide a statement.

Gilroy Mayor Roland Velasco said he and the city council will be meeting with community leaders to assess what more needs to be done and emphasized that the city will be providing whatever assistance is needed in “the days and weeks ahead.”

“The Gilroy community will mourn but we will get through it,” he said.

Left: A sniper takes aim on a house where police thought one of the shooters from mass shooting at the Gilroy Garlic festival might have been in Gilroy, California on July 28, 2019. At least three people were killed on Sunday in an ongoing shooting at a festival in northern California, according to a local official. Photo by Neal Waters/Anadolu Agency via Getty Images