A women died Tuesday from an apparent self-inflicted gunshot wound after she opened fire at YouTube headquarters in San Bruno, California, police said.

The woman wounded three people at a company courtyard before killing herself. All three people were transferred to local hospitals for gunshot-related injuries.

San Bruno police identified the female suspect as Nasim Najafi Aghdam, 39, of San Diego, California. There are conflicting reports about the suspect and whether she knew the victims, but her father told the Bay Area News Group that she “hated” YouTube after the company had stopped paying for the video content she posted to the site.

“This appears to be the motive for this incident,” the chief said.

Police said late Tuesday that they don’t believe the suspect targeted people during the shooting.

Here’s what we know — and don’t know — about the YouTube shooting. 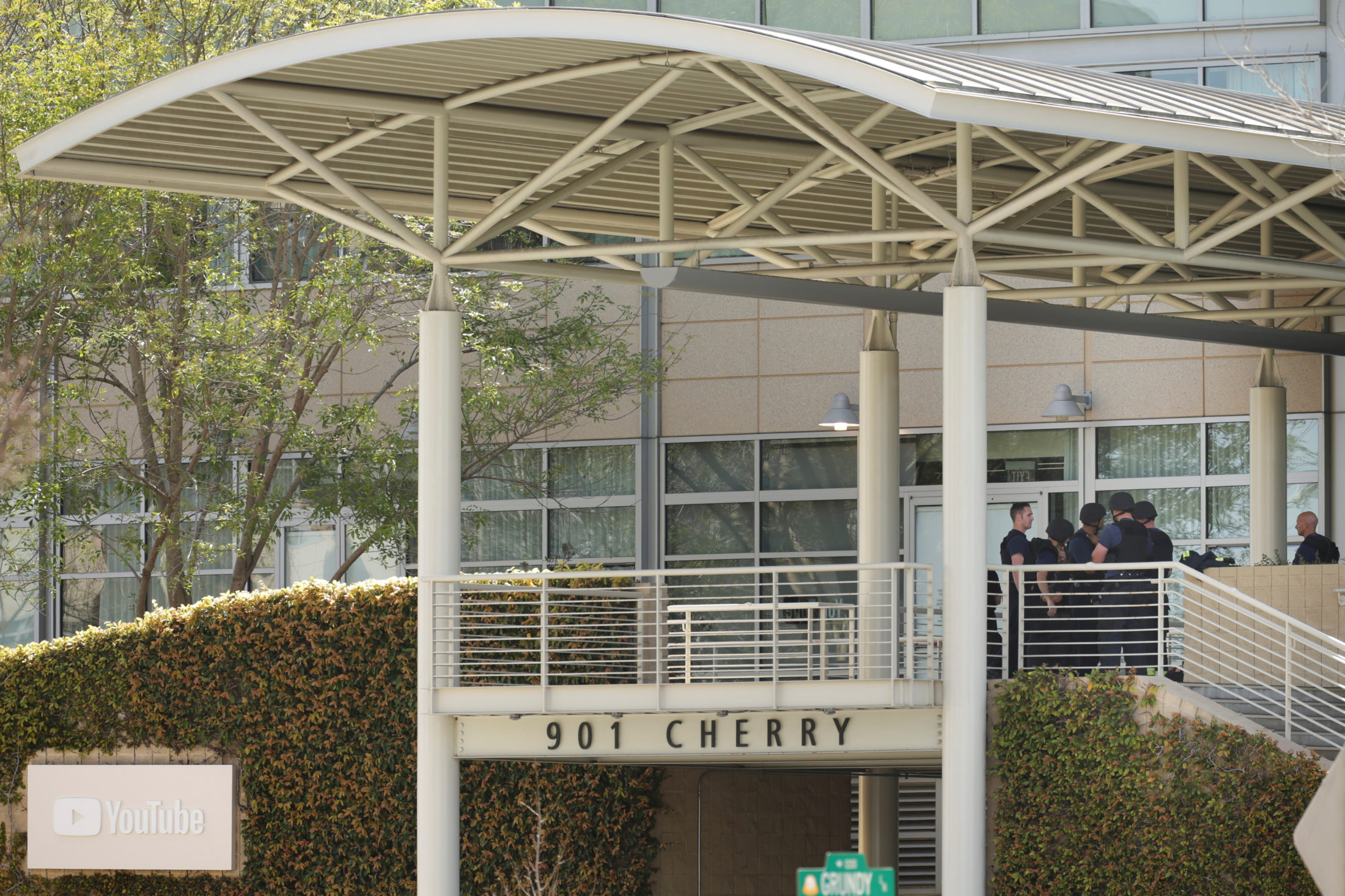 The San Bruno Police Department said in a statement that the station started to receive several 911 calls reporting gun fire at the YouTube campus around 12:46 p.m. PDT Tuesday.

Soon after the shooting started, witnesses took to social media to report, including YouTube product manager Vadim Lavrusik, who posted that there was an “active shooter” at the building.

Active shooter at YouTube HQ. Heard shots and saw people running while at my desk. Now barricaded inside a room with coworkers.

“Heard shots and saw people running while at my desk. Now barricaded inside a room with coworkers,” he tweeted.

Police chief Barberini told reporters at a briefing Tuesday afternoon that officers began to arrive at the scene about two minutes after initial reports of a shooting. Once there, the chief said, officers found one victim with a gunshot wound outside the front of the building. Barberini also said police saw other employees fleeing the building.

“It was very chaotic, as you can imagine,” Barberini said.

Aerials of the headquarters showed a heavy police presence at the YouTube building, located at 901 Cherry Ave. People also posted videos to Snapchat that showed people being evacuated from the building with their hands up. Emergency vehicles could also be heard in those videos.

Minutes later, officers found a dead woman, believed to be the shooter, inside the building.

Google, YouTube’s parent company, posted a note on Twitter from Google CEO Sundar Pichai. The note said that “employees were having lunch” when the company received reports of an active shooter on the San Bruno campus.

“There are no words to describe how horrible it was to have an active shooter [at] YouTube today … Our hearts go out to all those injured & impacted today. We will come together to heal as a family,” YouTube CEO Susan Wojcicki tweeted.

The YouTube headquarters can house as many as 2,500 employees. 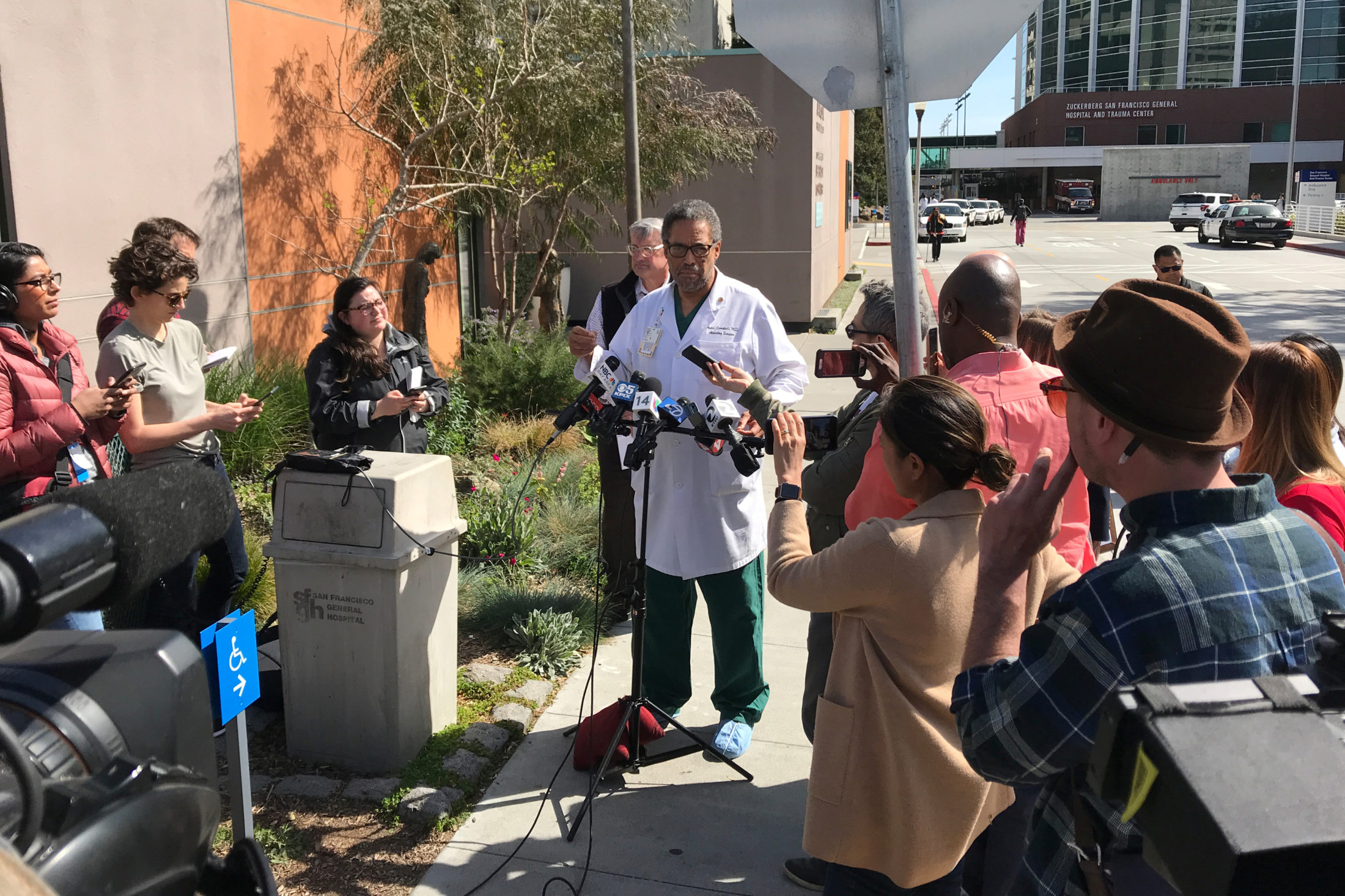 In a news conference hours after the shooting, a spokesman for Zuckerberg San Francisco General Hospital confirmed the facility received three victims from the shooting: two women and one man.

One woman, 32, is in serious condition; the second woman, 27, is in fair condition; and the 36-year-old man is in critical condition, the hospital spokesman said. All three were being treated for gunshot wounds. As of Tuesday afternoon, trauma surgeon Andre Campbell said none of the victims have needed surgery.

Authorities have yet to publicly identify all four victims.

In an update Tuesday night, police identified the suspected shooter as Nasim Najafi Aghdam, 39, who is a resident of San Diego, California.

Authorities have not yet provided additional details about the suspect, but multiple news outlets, citing anonymous police officials familiar with the investigation, initially reported that the incident was being treated as a domestic dispute. However, San Bruno police have said “there is no evidence that the shooter knew the victims of this shooting or that individuals were specifically targeted.”

Early Tuesday morning, hours before the shooting occurred, police in a city about 30 miles from YouTube’s headquarters found the suspect sleeping in her car, officers later told the Bay Area News Group.

“Our officers made contact with the woman after the license plate of her vehicle matched that of a missing person out of Southern California,” Mountain View Police spokeswoman Katie Nelson told the newspaper.

San Bruno, California, police officials provided an update on the shooting today. Watch their remarks in the player above.

Aghdam had been reported missing by family members since March 31, chief Barberini told reporters in a briefing Wednesday. He added that Aghdam was removed from the state’s missing persons system once Mountain View police located the suspect.

Aghdam’s father, Ismail Aghdam, told the Bay Area News Group that he had warned Mountain View police that his daughter may have been going to YouTube because she had harbored anger at the company. It’s not clear if Mountain View police knew about Aghdam’s feelings about YouTube nor whether they passed along that information to the San Bruno Police Department.

Aghdam appears to be connected to the name “Nasime Sabz” online. A website under that name, which no longer works, said YouTube had “filtered” content on the platform, preventing views to targeted videos, the Associated Press reported. “There is no equal growth opportunity on YOUTUBE or any other video sharing site, your channel will grow if they want to!!!!!” one message had said.

Aghdam’s father told the Bay Area News Group that Aghdam was angry when YouTube decided to stop monetizing her videos. Content creators can receive payment for ads that run with their videos. Authorities confirmed Wednesday that early reviews of Aghdam’s online posts pointed to disputes with YouTube over its policies.

Barberini said a Smith & Wesson 9mm semi-automatic handgun was recovered at the scene. It’s registered to Aghdam, he said. Aghdam’s family has said they did not know how Aghdam obtained the gun.

Investigators also learned that the suspect visited a local gun range prior to the shooting, and she had entered the YouTube headquarters through a parking garage, the chief added.

Shootings are terrorizing America. There are real ways to stop them