What’s the big deal about Michael Lewis and high-frequency trading?

With a “60 Minutes” interview, an online excerpt and full-page ad in the New York Times, Michael Lewis’ new book “Flash Boys: A Wall Street Revolt” is making its debut with a splash.

The stock market is rigged against the average investor, the book alleges, and in favor of the hedge funds and investment banks that engage in high-speed trading. 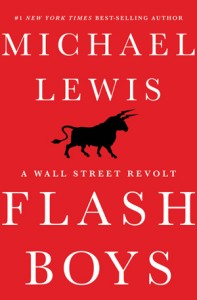 “They’re able to identify your desire to buy shares in Microsoft and buy them in front of you and sell them back to you at a higher price,” Lewis said on the Sunday evening program. That’s called front-running. “The speed advantage that the faster traders have,” Lewis continued, “is milliseconds…fractions of milliseconds.”

Naturally, that’s pricking some of Wall Street’s thickest-skinned traders. But the accusations aren’t new. Lewis’ book is the latest thorn in the side of high-speed traders who use high-frequency, computerized trading to make outsized profits.

As Making Sen$e has previously detailed, high-frequency trading, “HFT,” now represents more than half of all financial transactions, and for some time now, the early release of sensitive information to fuel these trades has been under the scrutiny of New York Attorney General Eric Schneiderman.

The FBI started looking into HFT last year and is now asking traders to come forward with stories of abuse to help in their inquiry.

Back in 2012, Paul Solman spoke with thriller author Robert Harris about his fictional take on an algorithm-driven Wall Street. But as Harris discovered, that world was anything but futuristic.

Harris describes how algorithms exploit buzzwords in the press — “panic, rumor, fear, slump” — to predict how the rest of the market will react and then beat other traders to the punch.

This May 2013 video shows 10 milliseconds of trading in the stock of Merck (with time slowed by a factor of 40,000). The colored boxes are exchanges and the circles are individual trades. (The same research firm, Nanex, has created a similar video to slow down trading of Johnson and Johnson stock within half a second.)

Distance, high-frequency trading proves, is time, and time, is money. Traders looking to beat their competition have invested in empty warehouses in northern New Jersey’s wetlands to store their fiber optic cables as close as possible to the center of action in Manhattan.

As the “60 Minutes” segment chronicles, a company called Spread Networks ran fiber optic cable from the Chicago futures market to the exchanges in New Jersey, and reduced trade time by three milliseconds — for $300 million.

Brad Katsuyama, Lewis’ protagonist, also featured in the “60 Minutes” interview, is using that same cable to eliminate the speed advantage on his alternative exchange, IEX. Essentially, by coiling kilometers of fiber optic cables between IEX and HFT computers, IEX sends any high-frequency trade on a fiber optic roller-coaster ride that will delay its arrival.

Others, like Mark Rosenman on this page, have advocated for a financial transaction tax to slow high-frequency trading.

Traditionally, high-frequency trading’s defenders argue that it creates more liquidity in the market and lowers prices for all investors. As Clifford Asness and Michael Mendelson of AQR Capital Management, an institutional investor focusing on long-term investment strategies, write for the Wall Street Journal:

Much of what HFTs do is “make markets”—that is, be willing to buy or sell stock anytime for the cost of a fraction of the bid-offer spread. They make money selling at the offer and buying at the bid more often than they have to do it the other way around. That is, they do it the same way that market makers have done it since they were making markets in Pompeii before Mount Vesuvius halted trading one day. High-frequency traders tend to do it best because their computers are much cheaper than expensive Wall Street traders, and competition forces them to pass most of the savings on to us investors. That also explains why many old-school Wall Street traders hate them.

… Well, sorry, but prices responding quickly—and traders not being able to buy or sell a ton without the market moving—is what is supposed to happen in a well-functioning market. It happens to us too. It may be that in the old days these managers were able to take advantage of whomever was on the other side of their trade, and that nowadays they find it far more difficult to gain that advantage. A more efficient market shouldn’t be mistaken for an unfair one.

The New York Times’ Andrew Ross Sorkin captures what critics of Lewis or of the coverage of his book suggest, which is that the narrative oversimplifies HFT into a scenario where big traders prey on little mom-and-pop investors. Instead, it’s more like big institutions pitted against big institutions, with pension funds supplying the money high-frequency traders invest.

By pointing a finger at the hedge funds and investment banks, Sorkin notes, Lewis misses the true culprits in the ultra-fast scheme: the big stock exchanges. The New York Stock Exchange, Nasdaq and Bats, for example, offer incentive pricing for high-speed traders. “The more you pay, the faster you trade,” Sorkin writes.

Goldman Sachs, meanwhile, one of HFT’s early adopters, has endorsed reforms to equalize trading and curtail some high-speed advantages. But appearances can be deceiving: the firm is underwriting the public offering of high-speed trading specialist Virtu Financial, according to The Times.

Bloomberg reports Wednesday that Virtu is delaying its public offering by several weeks “amid unprecedented scrutiny of high-frequency traders.”