On Friday, a Missouri judge acquitted a former St. Louis police officer in the 2011 shooting death of black motorist Anthony Lamar Smith, the latest in a series of acquittals or dropped charges for police officers involved in fatal shootings across the country.

Protesters began to stage demonstrations almost immediately after the judge announced former officer Jason Stockley, who is white, was not guilty. The demonstrations started peacefully. But police say some protesters threw rocks through Mayor Lyda Krewson’s windows, and others have clashed with officers and caused damage to local businesses.

Since Friday, authorities said they have made dozens of arrests and that several police officers have been injured by thrown objects like bricks.

As protests continue for a fourth day, here’s a look at the original case and how Stockley’s role in Smith’s death has affected racial tensions in St. Louis today.

On Dec. 20, 2011, Stockley and his partner, Brian Bianchi, attempted to arrest Smith, who they believed was part of a suspected drug deal outside a fast-food restaurant in St. Louis. But Smith drove away, prompting Stockley to fire a single shot at the vehicle.

During the high-speed pursuit that followed, Stockley is heard saying “Going to kill this (expletive), don’t you know it,” according to audio recordings filed in court.

Dashcam footage indicates Stockley told his partner to ram into Smith’s vehicle, which was slowing on the opposite shoulder, resulting in a crash that ended the chase. After exiting the police SUV and pausing on the driver’s side of Smith’s vehicle, Stockley fired five shots at Smith, fatally wounding him, according to court documents. Smith was later pronounced dead at a nearby hospital. An autopsy report from a St. Louis medical examiner said Smith had five gunshot entrance wounds, including in his neck and chest.

In a memo filed after the shooting, Stockley said Smith struck him with his car as he sped away from Stockley and Bianchi. “I observed, in plain view in the subject’s hands while resting on the passenger seat, a silver handgun. The handgun was pointing up and towards me,” Stockley added.

Stockley resigned in 2013, after five years on the force. The city reached a $900,000 settlement in a wrongful-death lawsuit brought by Smith’s daughter in 2013. But the state didn’t pursue charges against Stockley until May 2016. Then-St. Louis Circuit Attorney Jennifer Joyce said new evidence had finally given prosecutors enough legal standing to file first degree murder charges against Stockley.

Prosecutors had argued that Stockley planted a gun in Smith’s vehicle after the shooting, citing evidence that showed only Stockley’s DNA — not Smith’s — was found on the weapon. They also cited Stockley’s comments during the high-speed chase about his intent to kill the suspect.

Wilson wrote that the court “agonizingly” reviewed the evidence, but that the state ultimately did not prove beyond a reasonable doubt that Stockley wasn’t acting in self-defense.

Following Friday’s verdict, Circuit Attorney Kim Gardner, who took over in January, said she was “confident that we presented sufficient evidence at a trial to prove beyond a reasonable doubt that Jason Stockley was guilty of murder in the first degree.”

In an interview with the St. Louis Post-Dispatch after Friday’s verdict, Stockley said “it feels like a burden has been lifted, but the burden of having to kill someone never really lifts.”

“I can feel for and I understand what the family is going through, and I know everyone wants someone to blame, but I’m just not the guy,” said Stockley, 36, who now lives in Houston.

St. Louis officials said they had prepared for protests following the judges’ decision. But tensions escalated over the weekend when additional officers showed up in riot gear. Authorities said officers have been injured by objects thrown by protesters.

On Sunday, the third day of protests, police made mass arrests, detaining more than 80 demonstrators. There have been at least a couple of reports from journalists that officers in riot gear chanted “whose street, our street” during the arrests. The phrase is commonly used by demonstrators protesting police misconduct and excessive use of force.

It was chanted twice, AP journalists heard it too, I confirmed w/ 5x civilians standing closer to cops who chanted & with 2x cops at scene https://t.co/syuuAfi2bM

The protests don’t show any signs of slowing down. 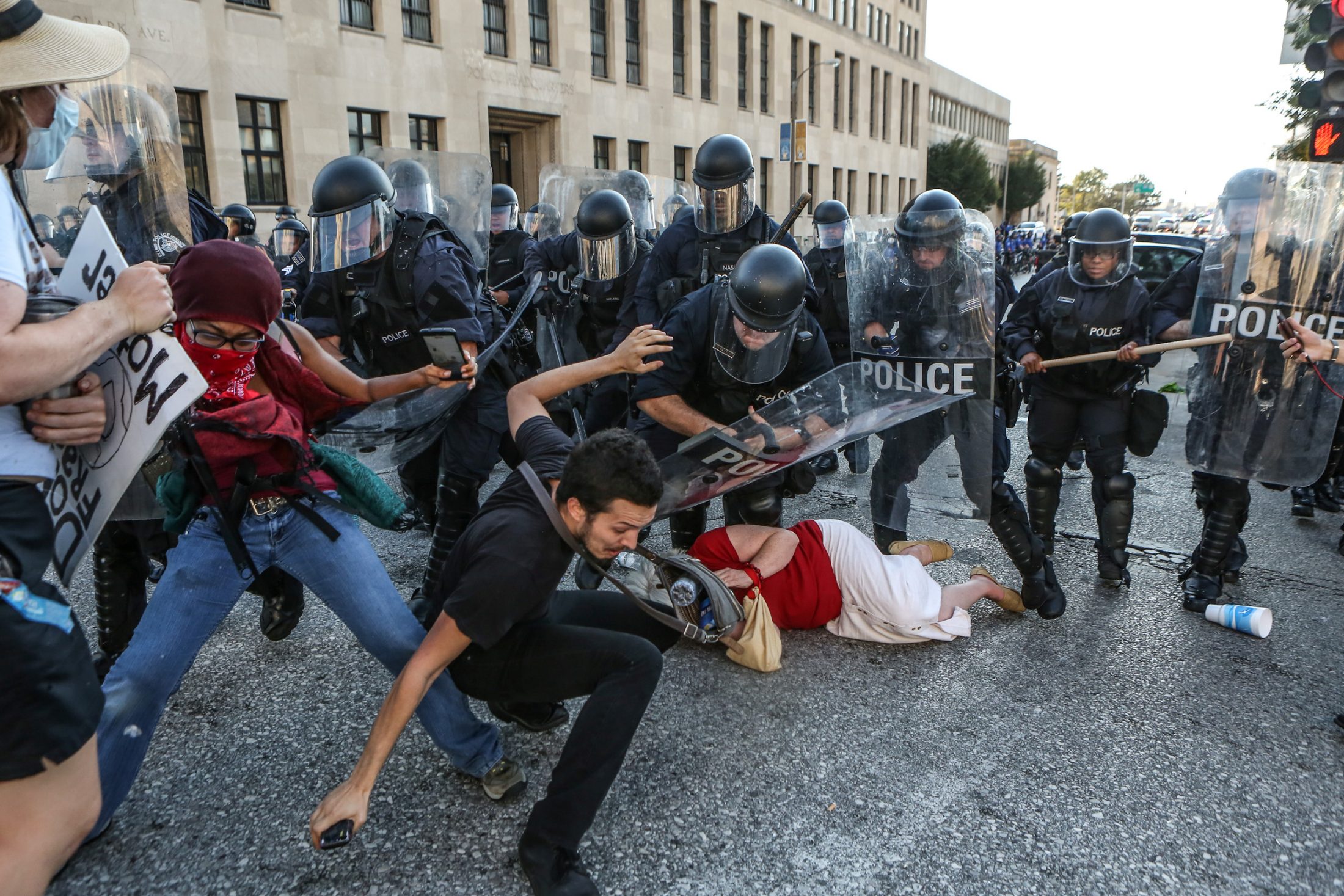 Protesters fall as they are pushed back by police in riot gear during a protest after a not guilty verdict in the murder trial of former St. Louis police officer Jason Stockley, charged with the 2011 shooting of Anthony Lamar Smith, who was black, in St. Louis, Missouri. Photo taken Sept. 15, 2017. Photo by Lawrence Bryant/Reuters

It’s been nearly six years since Smith’s death. It’s a case that predates the 2012 police killing of Trayvon Martin in Florida, which many see as helping to launch a national dialogue about race and police shootings, along with the Black Lives Matter movement. Tensions between local residents and city officials have existed ever since, strengthened in 2014 by the shooting death of 18-year-old Michael Brown in nearby Ferguson.

The not-guilty verdict last week is the latest in a line of high-profile police shooting cases that have ended this summer with no convictions, despite video and audio evidence used by state prosecutors in the courtroom. Convictions in officer-involved shootings are rare.

“The judge made the wrong decision,” she said. “No one speaks for Anthony but my family. I have no justice. I can never be at peace.”

In the years since Ferguson, St. Louis has tried to change the leadership of its police department and city council. And after Friday’s verdict, Gardner, the city’s first black circuit attorney, told CBS that she wanted to reform how investigations of police shootings are handled, “so that police aren’t investigating their fellow officers.”

Community activists who had demonstrated in the streets have now become much more involved in city organizations. But Tony Messenger, a metro columnist for the Post-Dispatch, says “one of the things that hasn’t happened here that happens after many of these cases … is a meeting of the minds. The public officials meet with the protest leaders” after Ferguson happened. “I haven’t seen that yet” in St. Louis, he added.

“I would expect that if that doesn’t happen then at some point soon this will continue,” he told the NewsHour. “You have a group of black activists who believes the police are out to get them and are unaccountable. I think they will continue in some sense until the feel they are heard.”

Left: People continue to march after the not guilty verdict in the murder trial of Jason Stockley, a former St. Louis police officer, charged with the 2011 shooting of Anthony Lamar Smith, who was black, in St. Louis, Missouri. Photo by Joshua Lott/Reuters