What’s next for the armed militiamen in Oregon?

He wouldn’t say how many protesters were present at the site of the occupied federal complex, but fewer than 20 people were visible Sunday afternoon.

The leader of the occupation spoke in cool, calm tones as he explained why he and other self-described militiamen broke into and took over the complex Saturday.

“This refuge, from its very inception has been a tool of tyranny,” said Bundy. He believes the federal government overstepped its constitutional bounds in its original purchase of the land back in 1908.

The occupiers said their mission is to put the federal lands under local control, although it’s unclear by what means. Bundy said the protesters have a plan that will take “several months at the shortest to accomplish.”

The refuge is a popular destination for spring birdwatchers, and the headquarters include a visitor’s center, museum and housing. 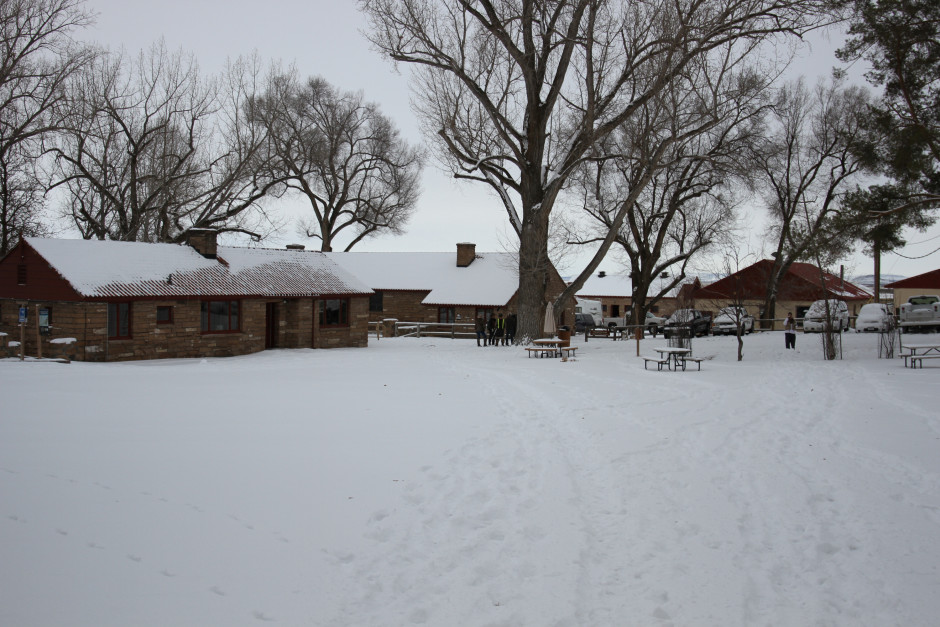 Ammon Bundy said the federal government overstepped its constitutional bounds in its original purchase of the land where the Malheur National Wildlife Refuge stands back in 1908. Photo by Amanda Peacher/OPB

Protester LaVoy Finicum, an Arizona rancher, said they’re being careful not to damage buildings or property. He claimed the protesters accessed the buildings after they found a set of keys. The U.S. Fish and Wildlife Service disputed that claim.

The militiamen came to Burns, Oregon, to support Dwight and Steven Hammond, a father and son pair who were convicted of setting fire to federal ranchlands.

Susan Hammond said Sunday that her husband, Dwight, was already en route to Los Angeles to begin serving his sentence. The Hammonds are due to report to prison Monday morning.

When asked about the refuge occupation, Susan Hammond gave a dry laugh and said she was very surprised by it.

“I don’t even know what ‘occupying the refuge’ means. I can’t judge what’s going on out there because I don’t know what it is,” she said. “I hope they’ve got some warm clothes.”

Temperatures have been frigid in this region of Oregon, with numbers dipping into single digits overnight.

“I don’t really know the purpose of the guys who are out there,” said Susan Hammond. “I kind of understand where they come from, as far as their priorities in life.”

When asked how long they plan to occupy the complex, Bundy would only say, “for as long as it takes.”

Finicum said he plans to stay “until the constitution is upheld.” They brought food, fuel and supplies, and local supporters visited the site Sunday adding to the stockpile.

Bundy said he hasn’t heard from any law enforcement “since we made the stand.” No officers were visible near the refuge, nor were marked police vehicles patrolling the remote, ice-covered highways near the site.

“They’re following it literally by the minute and that’s why it’s so important that we have this close coordination between the FBI, which of course takes the lead at the federal level, because of the wildlife refuge, and the state police, and the Harney County Sheriff’s Office,” Wyden said.

Oregon state police told OPB that a joint command center of federal, state and local law enforcement offices will be established Monday. The Harney County Sheriff’s office released a statement Sunday saying that law enforcement was working to make sure citizens are safe and “this issue is resolved as quickly and peaceful as possible.” 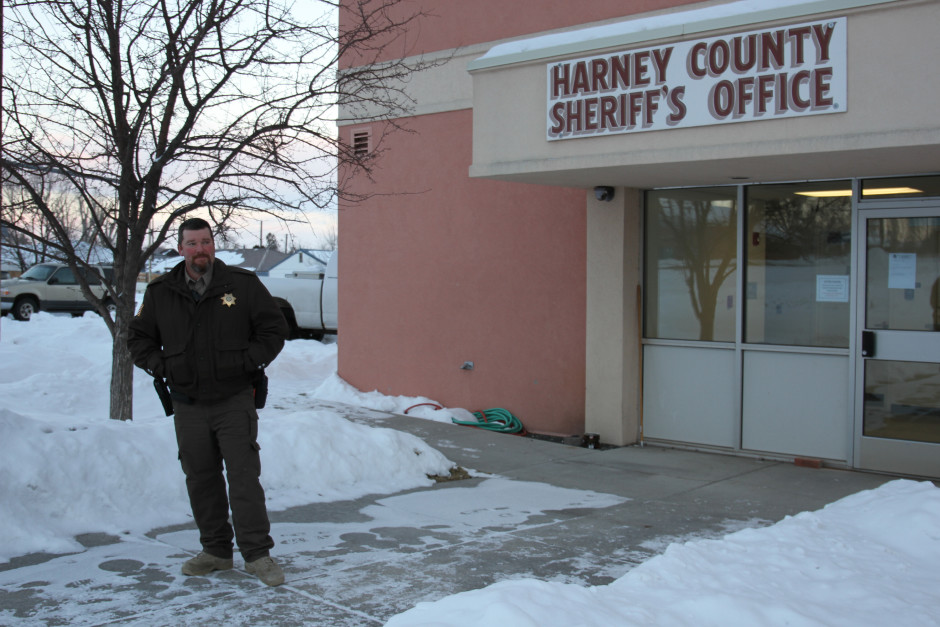 Harney County Sheriff David Ward has been under fire from militia groups around the country for refusing to create a sanctuary for the Hammonds to protect them from having to surrender. Photo by Amanda Peacher/OPB

“These men came to Harney County claiming to be part of militia groups supporting local ranchers, when in reality these men had alternative motives to attempt to overthrow the county and federal government in hopes to spark a movement across the United States,” wrote Sheriff David Ward.

The militia is prepared to use force, said Bundy, but they don’t intend to. “We will not be aggressive. We are here to defend the people.”

But would they respond with force, should the federal government act first?

“That would have to be determined at that time,” said Bundy. “If they did, that would be putting lives at risk. We’re not putting anybody at risk right now.”

The protesters come from as far away as Texas, Utah, Nevada, Idaho and Montana. They describe themselves as patriots, militiamen or constitutionalists.

“I came prepared for anything,” said one Utah man who called himself “Captain Moroni.” Many of the protesters provided reporters with names such as “Fluffy Unicorn,” or “Jimmy Joe.”

Captain Moroni said he participated in the 2014 Bundy Ranch standoff, and he was disappointed that more protesters did not arrive.

“I feel quite betrayed. It’s been on Facebook that everyone is going to come. And we show up, and everyone just craps out,” he said. “You come up here, ready to get killed if we have to and these people are just on Facebook about it.

“I’m not here to shoot anyone, I’m here to get shot,” he said, while guarding the entrance to the refuge headquarters Sunday afternoon, patting his hands together for warmth near a sagebrush fire.

Left: Ammon Bundy is the leader of the occupation that took over the Malheur National Wildlife Refuge building on Saturday. Photo by Amanda Peacher/OPB