When Did the Great Depression Start? – And Why That Matters 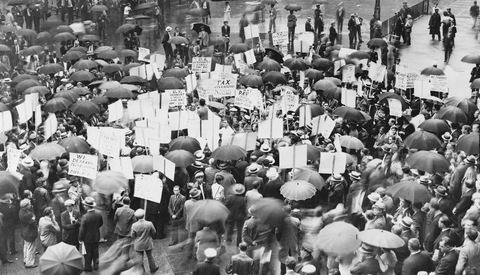 A crowd of depositors gather in the rain outside Bank of United States after its failure in 1931 during the Great Depression. Photo by World Telegram staff photographer from the Library of Congress via Wikimedia Commons.

Last week’s story on the history of the top income tax rate in America featured, as tour guide, Columbia University professor of tax law Alex Raskolnikov. After the story ran he sent us this email:

I hope our recent discussion of the relationship between marginal tax rates, economic growth, and inequality was illuminating and informative for PBS viewers. The relationship is, indeed, complicated. But some things are quite straightforward and unambiguous. And it is extremely important not to confuse the two.

For example, the so-called “Black Tuesday” (the U.S. stock market crash) happened on October 29, 1929. This date is widely used to mark the start of the Great Depression in the U.S. Whether that date is used or not, it is beyond doubt that unemployment spiked and economic growth started a precipitous decline before 1930. It is also quite clear that Herbert Hoover’s tax increase was debated and voted on in 1931 as Hoover was trying to demonstrate to the American public that he can do something to counter the Great Depression before heading into re-election. In other words, the Hoover tax increase was a reaction to several years of Great Depression.

So I was quite surprised to hear a well-known economist Arthur Laffer making the following statement during the broadcast:

“And we had the only boom in the world during that period. It was called the — remember, the Roaring ’20s. On Jan. 1, 1932 the highest marginal income tax rate was raised from 24 percent to 63 percent. We know what followed. It wasn’t a pretty picture.”

> A lot of issues are uncertain in tax and economic policy, but this is not one of them! If you listen to the segment, it looks like Laffer and I disagree about an uncertain point. But there’s nothing to disagree about — he’s just flat out wrong, and I find it hard to believe that he doesn’t know what followed what.

So what kind of balanced reporting results on the part of PBS? As you know, I don’t have an agenda, I don’t want to over-simplify things, and I’m trying to present an unbiased view. I know you feel the same way. But when you put a careful and moderate view “on one hand” and a completely implausible conservative argument “on the other”, the resulting picture is distorted. The greatest problem with this is that we cannot have a thoughtful debate about questions that are truly difficult and uncertain until we stop making statements like the one Arthur Laffer made the other night.

We asked Arthur Laffer to respond. If he does, we’ll post what he says. Meanwhile, my response is that I assumed Laffer had meant the rest of the ’30s, not the onset of the Great Depression, which is generally dated from the Crash of October, 1929. That’s why I asked Professor Raskolnikov, in the story:

“Do you read anything into this, I mean, that perhaps the Great Depression continued for another nine years because rates were jacked up that high?”

His answer: “There were many factors going into Depression. Tax policy was only one of them, so it’s hard to know.”

His fuller response, of course, is the one he sent us, above. For which we’re grateful.