Where Poetry Lives: Sharing Moments and Verse When Memory Fades 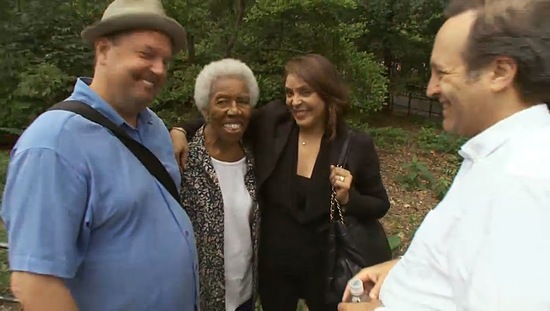 “A short walk in the park, a sax, a lot of poetry: Memories lost, moments gained.”

Welcome to the first in a new series of reports we’re doing with U.S. poet laureate Natasha Trethewey. We dreamed this up together, with the help of Rob Casper at the Library of Congress and Stephen Young at the Poetry Foundation, as a way to go into the world and look for poetry — where and how it lives in sometimes unexpected places and ways. The idea is to follow where the poetry leads us into various corners of American life and, along the way, explore often difficult issues and problems in our society. Our first story involves the Alzheimer’s Poetry Project.

Recently, with producer Anne Davenport, Natasha and I visited the New York Memory Center in Brooklyn, and spent time with poet Gary Glazner as he worked with people with dementia.

Glazner’s goal: To use poetry to help people who’ve lost memories live in the moment, to connect to the past, to share new moments with loved ones and each other. With the cases of dementia on the rise, this is something that affects so many of us and I can say the visit was a moving experience for us all. Natasha told me, and writes in an accompanying essay, of her great-aunt Sugar, who lived many years with dementia. Coming to grips with that and with what it means to lose one’s personal history, Natasha says, was part of her own early exploration in poetry. In Brooklyn’s Prospect Park she read her poem, “Give and Take.”

Gary Glazner has been using poetry to help people since the 1990s when he worked in an adult daycare center in northern California. One day he hit on the idea of using classic poems to engage elderly patients who may have remembered poems they learned as kids. Glazner told the NewsHour the reaction of one previously-uninterested man: “I said the Henry Wadsworth Longfellow poem The Arrow and the Song: ‘I shot an arrow in the air’, and his eyes popped open and he said, ‘It fell to earth and I know not where.’”

From that point on, Glazner said he knew he wanted to connect poetry to older people. He founded the Alzheimer’s Poetry Project almost a decade ago, using call and response (or what he calls “I say it, you say it”) to build a common passion around the performance and creation of poetry. The APP has held 500 sessions at over 100 facilities across the country as well as internationally, training health care workers and family members in using poetry. He is now at work on a book entitled, “Dementia Art: Celebrating Creativity in Elder Care,” which includes poems and performance tips in the form of recipes.

Here’s Glazner reading his poem, “We Are Forget” about his experience of working with people with dementia.

Gary Glazner and Natasha Trethewey joined forces at the Alzheimer’s Poetry Project to work with children from Ace Preschool, which operates upstairs from APP.

Natasha also engaged the participants in the Alzheimer’s Poetry Project and their family in friends at the boathouse on the duck pond at Prospect Park. She chose Lucille Clifton’s Why Some People be Mad at Me Sometimes.

Finally, here are links to some of Natasha’s appearances on the NewsHour over the years: