Who was the healthiest president ever?

Donald Trump is in “astonishingly excellent” shape, according to a doctor’s note his campaign released yesterday.

Trump doesn’t drink or smoke, has only had one surgery in his life (an appendectomy as a child), and even lost 15 pounds in the last year. (The report didn’t list his height or weight.) In short, Bornstein wrote, Trump would be the “healthiest individual ever elected to the presidency.”

That statement is a claim that deserves closer scrutiny.

Trump’s doctor offers the candidate’s healthy blood pressure of 110/65, as one piece of evidence. But the real estate tycoon, who will be 70 on Election Day, would be the oldest president in United States history. 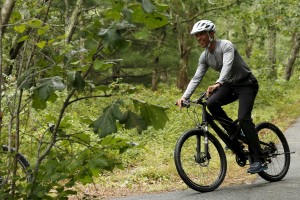 President Barack Obama, who took time for a family bike ride during his vacation last August, is known for adhering to a daily workout routine. Photo by Kevin Lamarque/Reuters

Age does not define health, but there have been numerous, younger occupants of the White House who were notably more active immediately before or during their tenures in office.

John Quincy Adams swam naked in the Potomac River every day and lived to be 80 in an era when average life expectancy was well under 50. Teddy Roosevelt was an active outdoorsman and literal Cowboy.

Gerald Ford was perhaps the most athletic president in the 20th century, and was known for working at a fevered (if occasionally clumsy) pace in the White House. And George W. Bush and Barack Obama have both been avid exercisers-in-chief.

Trump might have to start training to absolutely prove his doctor’s claim.

Left: Gerald Ford, pictured here tossing out an opening day pitch in 1976, is widely considered to be one of the healthiest and most athletic presidents in U.S. history.