You could get the measles, even if you’re vaccinated

Contained inside the data of the latest measles outbreak is a surprising — and troubling — number. Among the 51 measles cases linked directly to Disneyland, six of the people had received their measles, mumps and rubella vaccine, according to the Centers for Disease Control and Prevention.

It should come as little surprise when the unvaccinated get sick with the measles. As viruses go, this one packs a mighty punch. Nine of out 10 unvaccinated people exposed to the measles virus will get the measles. That’s a whopping 90 percent.

But why hadn’t the vaccine protected these six people who had been vaccinated?

Here’s the thing. The MMR vaccine is very effective, but it’s not 100 percent preventative. Some people who get the vaccine are still at risk of contracting the disease. Large numbers of vaccinated people act as a firewall that prevent the disease from spreading to those who are vulnerable. The vaccinated protect the unvaccinated. That’s known as “herd immunity.” But as more people opt not to get vaccinated, or not to get their children vaccinated, the virus has more portals to creep through, more people to infect. And those people sneeze and cough, releasing the virus into the air, and that fuels the spread of the disease.

Some parents opt out of the MMR vaccine, often due to thoroughly discredited studies that link it to autism. Simply put, if everyone got the vaccine, the virus would have nowhere to go. The unvaccinated keep the measles alive.

But let’s back up. The MMR vaccine works by introducing tiny live amounts of the three viruses — measles, mumps and rubella — to provoke an immune response in the body that serves as a lifelong protective shield. It comes in two doses. Typically the first is administered at 12 months and the second at 4 or 5 years old. The first dose provides 95 percent protection. But 5 percent of patients have immune systems that don’t respond to these antibodies. The second kindergarten-age dose bolsters the coverage to 99 percent.

“But you still have 1 percent of people who have two doses of the vaccine who we call non-responders,” Patsy Stinchfield, director of Infection Prevention and Control and the Children’s Immunization Project at Children’s Hospitals and Clinics of Minnesota.

Think about it this way. Say there was a massive measles outbreak, and 1 million people were infected. Roughly 10,000 of those people who had received both doses would still get sick.

In the case of the Disneyland outbreak, four of the measles patients had received the full two doses; two had received only one dose.

At especially high risk for the measles are infants between the ages of six and 12 months, who are too young to get the vaccine. Maternal antibodies that cross the placenta protect the child for the first few months of life. But as the baby gets bigger, that protection fades.

“Between six and 12 months, you don’t get that maternal antibody protection, and you haven’t had the vaccine, so you’re in this valley of vulnerable,” Stinchfield said.

Laura Bredesen’s son Ben was diagnosed with acute lymphoblastic leukemia in June 2010. He was 2. For more than three years, he underwent daily chemotherapy and frequent steroids, treatment that left his immune system compromised and extremely vulnerable to any virus. “Every minor illness,” his mother wrote,” had the potential to balloon into a more complicated condition requiring additional treatments.”

In March 2011, Ben was potentially exposed to the measles by an unvaccinated 2-year-old while in the hospital for a routine spinal tap treatment. He had received his first dose of the MMR vaccine, but was too young for the second, and doctors feared his chemotherapy, which kills cancer cells but can also impact immune memory cells, had weakened his protection to the virus. The chemotherapy, in other words, had made Ben vulnerable to diseases he’d been vaccinated against. 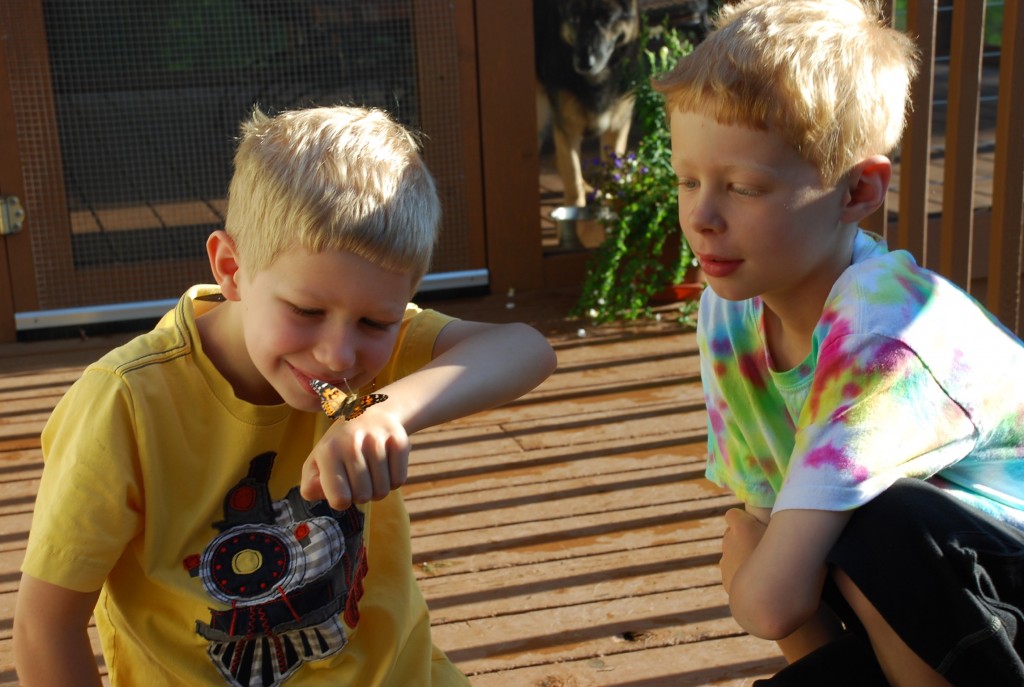 Ben Bredesen, left, and his brother Calvin in 2014. Photo by Laura Bredesen

What followed, Bredesen said, were the scariest three weeks of her family’s life. Ben’s muscles were injected with eight painful shots of immune globulin to boost his immune system, after which his legs were so sore he temporarily couldn’t walk, and he was isolated at home to protect others for nearly three weeks.

“If Ben had come down with the measles, his chances wouldn’t have been good,” Bredesen said. “He would have been fighting for his life.”

Ben, now 7, never contracted the measles and is “doing wonderfully now,” his mother reports. But she remembers that time as being the most “mentally painful” of his treatment.

“Those 3.5 years were incredibly hard,” Bredesen said. “But those 21 days were the most challenging of our lives.”

Among the viruses that commonly make news — enterovirus 68, Ebola, influenza and measles — measles ranks far and away the most contagious, Stinchfield said.

“You won’t get Ebola in a subway, in a school, at a daycare or in a train station, but you can get the measles in all those places,” she said. “It stays airborne for two hours after someone walks through that train station. That means everyone who walks through the airspace will be exposed.”

And while most patients recover fully, “it is a disease that needs to be taken very seriously,” said Dr. Eric Handler, the health officer in Orange County, where 23 of the cases have been reported this year. Of the 23, six were children, five of them unimmunized, he said.

Measles often starts with cold symptoms: a runny nose and watery eyes that can turn to conjunctivitis, or pink eye. Symptoms typically progress to a cough, fever and a rash. Most people are in bed, miserable, for a week and then recover. In most cases, it’s a manageable illness. But about 1 in 20 people with measles will get pneumonia and likely be hospitalized. And 1 in 1,000 measles cases will advance to encephalitis, a dangerous swelling of the brain.

Of the encephalitis cases, Stinchfield said, a very high percentage — about two-thirds — have permanent impairment, whether that’s brain damage, developmental delays, blindness or deafness. “They go home a different person,” she said.

“What you have to understand is really even one case is considered a public health emergency because of how contagious measles is,” Stinchfield said. “It only takes a small community of unimmunized for the virus to take hold and spread.”

Left: A pediatrician administers a measles vaccination during a visit to the Miami Children's Hospital in May 2014 . Photo by Joe Raedle/Getty Images