Editor’s Note: Dustin Reid may not have a four-year college degree, but he’s hoping to have a job for life. The 29-year-old former Marine worked in a scrapyard for two years, and then a poultry plant. At BMW’s only U.S. plant, in Spartanburg, South Carolina, he’s been part of the Scholars Program, an apprenticeship program that was the subject of Wednesday’s Making Sen$e segment, which you can watch below. He likes it so much, he’s wooed his friends from the poultry plant to BMW, too. In this extended conversation with Paul Solman, he explains why manufacturing is growing in the United States, and why the American dream is about a lot more than attaining a college degree.

Paul Solman: So my main question is, what’s the difference between learning through the Scholar’s program and learning at school?

Dustin Reid: The biggest difference, I’d have to say, is the amount of knowledge you get at the workplace and how you get to apply it. At school, you’re gaining knowledge, which is wonderful, but here you get to apply what you learn on the job. You’ve got many mentors to hear you and help coach you along the way. That’s a great opportunity.

Paul Solman: I remember when I was at school, I was looking at the clock all the time because I couldn’t wait for the classes; I just couldn’t sit still for that long.

Dustin Reid: I enjoy the classroom, I enjoy the instructors, I enjoy the small classes through the technical colleges and so, I don’t really struggle with that too much.

Paul Solman: So what were you doing in school?

Dustin Reid: I’m taking a mechatronics degree right now. I’m still currently involved in it. It’s kind of like a combination of mechanical, electrical, communication, engineering, then controls and computer engineering. And then it’s pretty multifaceted with those dimensions all into one and it teaches you a whole lot. You get a little bit of everything to form one big core degree.

Paul Solman: Did you think you were going to go into manufacturing in an automobile plant?

Dustin Reid: I thought about it once I heard about how great BMW was up here. I always had a fascination for manufacturing and production-style work, but I never knew I’d be here at BMW. It was a great opportunity to hear about the Scholars Program and once I did, I knew it was the way to go. 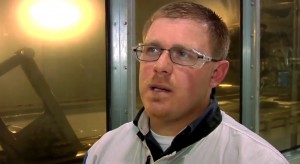 Dustin Reid is a BMW scholar in their apprenticeship program at their U.S. plant in Spartanburg, South Carolina.

Paul Solman: Why aren’t more American young people interested in this? They don’t know about it? There’s a kind of stigma associated with it?

Dustin Reid: I think the main reason is people associate this type of work with hard, dirty work conditions. And they really don’t know that working in a place like this is fairly clean; it’s very technologically advanced. I think there’s just a lack of knowledge and understanding of what really goes on in today’s manufacturing arena.

Paul Solman: A number of people have suggested to me that it’s because of what happened to the textile industry in South Carolina.

Dustin Reid: The textile industry taking a plunge really affected us in a major way, and this is a way for us to come back and really start growing again in this community and South Carolina as a whole, and the region. Manufacturing’s really, really growing right now, especially in this area, and I think if people took advantage of it and actually got more knowledge on it, they’d see how great and beneficial it is for them.

Paul Solman: But isn’t the American dream to get a four-year college degree and then get a good job?

Dustin Reid: I would have to agree with you there. That’s considered the American dream. Let me go to college for four years and then go see what I can find.

I feel that what they’re offering through the tech schools and partnerships with the local manufacturing companies here really offers you that chance to go ahead and start that manufacturing career and American dream much sooner. I really don’t see what you’re missing by just getting an associate degree and coming straight into work and getting all that knowledge and experience. And you can still further your education from that point on, so I think it’s great that you can come in a little bit ahead of time, as opposed to having to wait the full four years.

Paul Solman: Are your friends getting the message? Do your friends say, “Hey, Dustin, I never thought about it this way. Could you hook me up?”

Dustin Reid: Yes sir, they do. I really stress to them how important an opportunity like this is. I’ve had friends move up from as far away as Georgia or Columbia, [South Carolina.] They’re former co-workers, as a matter of fact, or fellow students from Spartanburg Community College.

Paul Solman: Is it looked down upon around here to go to a community college, as opposed to, say, Clemson, Furman, University of South Carolina?

Dustin Reid: I wouldn’t say it’s looked down upon. It’s not considered as good as a four-year degree or a master’s degree from Clemson or USC, but as far as the community is concerned, it’s great for our community to learn and gain valuable knowledge, and go ahead and start a good career. This is the best way to go about doing it, especially if manufacturing’s your goal.

Paul Solman:Do you think that you’re better off than the typical student who spends four years in Clemson or Furman or the University of South Carolina?

Dustin Reid: I wouldn’t say I’m better off, but I just think that from what I’ve heard, and from what I’ve seen, there’s a lot of students nowadays that graduate with a four-year degree and can’t find work. They really struggle with finding work, but with this two-year degree, I’m able to come and get a career for the rest of my life at a premier manufacturing company. Pretty much speaks for itself.

Left: Manufacturing apprenticeship programs put young workers on the path to a career, whereas college graduates can languish without a job. Photo by Bloomberg via Getty Images.