Why Canada’s economy is headed off the cliff

Editor’s Note: When we think of economic crisis, we think Greece. And maybe, closer to home, the collapse of Lehman Brothers or Florida’s overleveraged housing market. But rarely do our neighbors to the north come immediately to mind.

Just back from Canada, Vikram Mansharamani argues that they should. Mansharamani, a lecturer in the Program on Ethics, Politics & Economics at Yale University and a senior fellow at the Mossavar-Rahmani Center for Business and Government at the Harvard Kennedy School, is concerned about rising home prices and falling oil prices. The author of “Boombustology: Spotting Financial Bubbles Before They Burst,” he’s also written for Making Sen$e about random class admissions at Yale.

Canada is in the midst of an unprecedented housing boom that seems likely to bust. I was recently in Canada and noticed a schizophrenic oscillation between housing exuberance and oil-price despair. What did it mean for the Canadian economy’s outlook? Upon returning to the U.S., I did some research. What I found leads me to the conclusion that Canada is now among the most vulnerable large economies in the world. Here’s why.

First, household credit. The seemingly conservative Canadian population has been voraciously consuming debt at a breakneck pace. Total household debt (C$1.82 trillion) now exceeds GDP (C$1.6 trillion), approximately C$1.3 trillion of which was for residential mortgages. Further, household debt is now greater than 160 percent of disposable income – meaning it would take about 20 months for a family to pay off its debt if interest rates were 0 percent and they spent 100 percent of their disposable income to do so. Uh oh! The consumer clearly seems stretched, so much so that McKinsey recently suggested Canadian financial instability driven by a rapid consumer slowdown was not unlikely. By the way, that’s exactly what happened here in the United States when the debt music stopped and there weren’t enough consumer chairs to go around.

Second, housing prices. Home prices continue their basically uninterrupted rise that began in the mid-late 1990s. Unlike the United States real estate markets, which have corrected, Canadian prices continue to rise. Detached single-family homes in Toronto now average more than C$1 million and Vancouver is now deemed the second least affordable city in the world – thanks to Chinese buyers (who are themselves facing a slower economy). Take a look at the following chart of U.S. and Canadian housing prices in real terms since 1990. 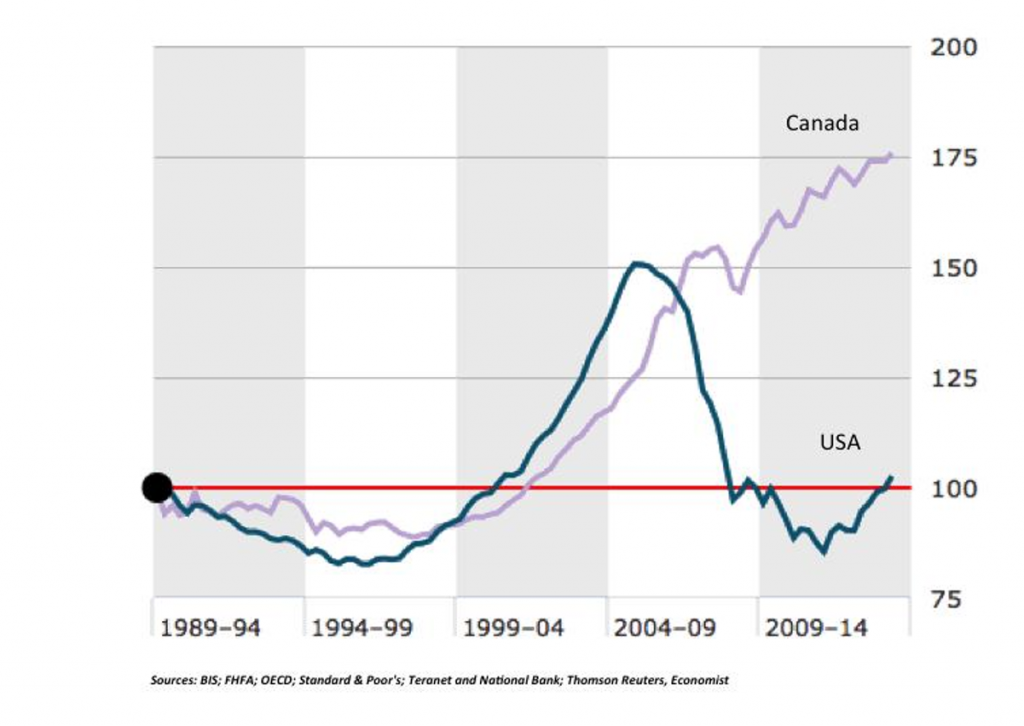 It’s interesting to note that the data in this chart is updated through the summer of 2014, and we know that prices have risen since then. In fact, the Bank of Canada even suggested in December that housing prices were overvalued by as much as 30 percent. The IMF has also sounded warnings. Yet despite these alarm bells, there seems to be a widespread fear that prices will continue rising indefinitely, creating a “get in or miss it” mentality that is unlikely to be sustainable.

Third, crude oil. The impact of lower oil prices is rippling through the economy at breakneck speed. Since 2011, Alberta, the oil-rich home of the oil sands, was responsible for more than 50 percent of all jobs created in Canada. It has been the locomotive of job creation pulling Canada forward, but it is now in reverse. Employment growth has stopped in Alberta and is now shrinking. According to construction industry association BuildForce, Alberta is likely to see sustained job losses for the next three years at a minimum. Further, because Alberta drew workers from all over the country, any provincial slowdown will have national ramifications on unemployment and consumer confidence. Fewer jobs in Alberta actually translates into less income throughout Canada. Yikes!

In this Looney Tune, it seems our Crazy Canadian Coyote has run off the cliff, his feet are still moving, but he has yet to look down.

Finally, craziness. Yup, not sure how to better categorize what I’m about to say. Here’s the situation, as told to me by Seth Daniels of JKD Capital, one of the most astute Canada-watchers I know. Daniels told me that there is now a booming private mortgage market in which ordinary citizens are borrowing from their home equity lines to lend money to desperate borrowers. Specifically, he noted “a homeowner acts as a subprime lender by drawing his home equity line at ~3%, and lends it to a subprime borrower at 8-12% for one year.”

I honestly didn’t believe him when he first mentioned this to me, but I then confirmed it myself. In fact, if you’re a Canadian and interested, here’s a sales pitch from one vendor. It’s only a matter of time before this shadow mortgage banking market slows, and the ramifications are likely to be enormous as defaults skyrocket, housing prices plummet, and consumer spending rapidly slows.

Net net, the ending of the Canadian credit binge, combined with an oil-driven economic slowdown, is likely to crush consumer sentiment. In this Looney Tune, it seems our Crazy Canadian Coyote has run off the cliff, his feet are still moving, but he has yet to look down. He’s suspended in air, and it’s only a matter of time until gravity exerts its force.