Why does health care cost so much in America? Ask Harvard’s David Cutler 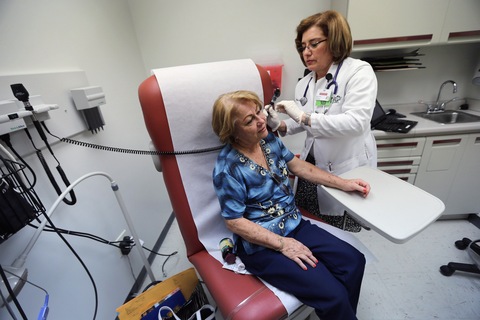 The American health care system is structured differently from systems in other countries, making it more expensive. Photo courtesy of Joe Raedle/Getty Images.

Paul Solman: Harvard’s David Cutler is among the country’s foremost health economists, famous for — among other research — a controversial paper arguing that even our exorbitant health care industry, in terms of increased productivity and life span outcomes, delivers more than what we pay for it. Cutler, who was profiled by Roger Lowenstein in the New York Times Magazine in 2005, subsequently worked for President Barack Obama on health care issues, and talked to us recently for a story about cost savings. But far more of what he had to say seemed worthwhile than what we have time to air. Here is some of it.

Paul Solman: Why does health care cost so much in America?

David Cutler: Let me give you three reasons why. The first one is because the administrative costs of running our health care system are astronomical. About one quarter of health care cost is associated with administration, which is far higher than in any other country.

Paul Solman: What’s the next highest?

David Cutler: About 10, 15 percent. Just to give you one example, Duke University Hospital has 900 hospital beds and 1,300 billing clerks. The typical Canadian hospital has a handful of billing clerks. Single-payer systems have fewer administrative needs. That’s not to say they’re better, but that’s just on one dimension that they clearly cost less. What a lot of those people are doing in America is they are figuring out how to bill different insurers for different systems, figuring out how to collect money from people, all of that sort of stuff.

Paul Solman: And that’s not only doctors being paid more in this country, but the United States making the decision as a government not to buy drugs in bulk and therefore to bid down the price that pharmaceutical companies can charge.

David Cutler: The lowest prices for pharmaceuticals, and a variety of other medical devices and payments to physicians, are in government plans. So Medicaid gets the best prices on pharmaceuticals. In terms of physician payments, Medicaid payments are the lowest. Medicare payments are above that and private payments are above that. The more leverage the buyer has, the lower the price they get. That’s true in every industry. In health care, the United States doesn’t utilize that leverage as much as other countries do.

David Cutler: The third one is Americans receive more medical care than people do in other countries, not so much in terms of doctor visits, but if a person has a heart attack in the United States, they’re much more likely to get open heart surgery than they are in most other countries.

Paul Solman: But that means that the people in Canada or in Ontario have to wait longer right?

David Cutler: Sometimes they wait longer. What’s much more common is that there’s a lot of gray area where it’s not clear if you need the open heart surgery or not, and in the U.S., people will get it and in Canada, they don’t. The interesting thing about it is that life expectancy or one-year mortality after a heart attack is the same in the two countries.

Is The Rise of Costs Inevitable?

David Cutler: Technology is the underlying driver and there will always be some of that, which is why health care will not be like other industries in terms of always, always going down in price.

On the other hand, there’s so much waste in the system — our best guess is that about a third of medical spending is not associated with improved outcomes — that for the next 15 to 20 years people believe that costs could be stable or falling as a share of the economy without cutting into necessary services — just by eliminating the things that are not necessary…

What we’ve done in Massachusetts is we’ve said, don’t just give people very high cost-sharing in general; do what’s called tiering it — that is, tell people that if you look for basic levels of care, you’re not going to face very high costs, but if you want to go to the teaching hospital for the routine procedure, you’re going to have to pay a lot for that. And we mandate that insurance companies have to tell people the price of any service. So if your doctor says you need an MRI, you can go on the computer and your insurance company’s website and figure out exactly your cost sharing at each place where they would do the MRI.

Paul Solman: So that will provide comparison shopping.

David Cutler: That’s on the demand side. Give people more skin in the game and give them the information so they can do real shopping.

David Cutler: Higher co-pays. We know that people respond to co-payments and they like cheaper care. So the hope is to steer people to less expensive sites. We’ve also pushed very strongly that insurance payments to doctors and hospitals and other care providers not be based on volume (so-called “fee for service”), but instead be value-based payments.

Paul Solman: But doesn’t that provide an incentive or a prod to the provider to stint on the services, stint on the MRI, say, that I might otherwise get?

David Cutler: What that’s being coupled with is a very aggressive approach to measuring quality. … Really what we’re doing is two things: one is on the demand side trying to make people smarter consumers, and the second is on the provider side, eliminating the monetary incentives to do more testing and procedures. Instead, let’s move to a system that says, “do what’s appropriate, make the patients better and you’ll get rewarded for it.”

What If I Want a Certain Procedure?

Paul Solman: Well it sounds ideal, but I just keep thinking that I’d want to go to the dermatologist every six months, say, just to check out every possible discoloration. I’m a little crazy that way, but also, I feel, maximally prudent.

David Cutler: A lot of provider organizations are putting the doctors on a salary basis. Let’s gather our doctors together to figure out what the evidence says is right. If the literature is clear, let’s make sure we do that 100 percent of the time. If the literature is not clear, let’s go through our records and see how we can do better. If the patient then wants more, then say, “Okay, fine, you can have that, but you’re going to pay a little more because that’s not what the literature says is necessary in your case.”

Paul Solman: Well, of course, presumably my insurance company is already trying to do that.

David Cutler: Typically they’re very bad at it though, and when they tell the doctors they’ve imposed this, it goes poorly.

Paul Solman: So right now, I go to a dermatologist on a regular basis — I’ve always had some skin difficulties, but I’ve never had a melanoma — and that’s covered by my insurance. You’re saying, hey, if I’m a little paranoid with regard to discolorations, fine, let me go, but then I ought to pay to do that?

David Cutler: Increasingly, I believe insurers will make you pay more for care that you want to do that’s not medically necessary.

David Cutler: Care that’s ordered; that’s not following some accepted standard. You see this in certain parts of the country where the insurers say, “We’ll pay only a fixed amount for a knee replacement. We’ve determined that high quality knee replacement can be had for $8,000 nearby you. So we’ll give you $8,000. Now if you want to go to someone else who charges $20,000, fine, but you’re gonna pay the extra $12,000.”

Paul Solman: And my insurer did that recently with regard to a bronchial inhaler and said, “No, you can’t get that one; you can only get this cheaper one.”

David Cutler: Exactly, it’s what they’ve been doing with drugs for quite a long time. The generic version is very cheap; the branded drug is much more expensive.

In a lot of parts of the country, they’re just saying, “Look, if you want this service at all, you’re going to pay a lot of money.” The trend in health care nationally is to put more and more on the patient.