Why half of U.S. adults no longer believe in the American dream

“Most Americans (72 percent) think the economy is still in a recession.”

Consider that consumer confidence influences consumption, which, in turn, impacts GDP. Or that discouraged job-hunters shape the health of the labor market. Given those factors, it’s fair to say that the way Americans think and feel about their own economic security is of utmost importance to understanding where America’s economy is headed.

According to the annual American Values Survey of 4,500 Americans released Tuesday, 41 percent of Americans think they’re in “good” or “excellent” financial shape, pretty close to 2012’s 42 percent, but down from 50 percent four years ago.

Nearly half of Americans who once believed in the American dream (defined as the belief that if you work hard, you’ll get ahead) think it no longer exists. Similarly, close to half of all Americans over 18 think their generation is better off financially than their children’s will be. 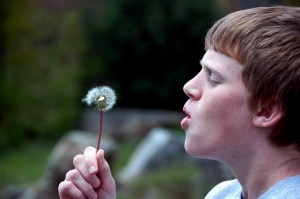 Nearly fifty percent of American adults think they’re better off than their children will be. Photo by Flickr user capdn madd matt.

What symptoms are Americans experiencing that have led to this gloomy outlook? With the results of the survey, the Public Religion Research Institute created an Economic Insecurity Index to zero in on specific conditions of economic malaise. They asked survey participants whether they’d experienced any of six different forms of economic insecurity: Had they reduced meals or cut back on food to save money? Were they unable to pay a monthly bill? Did they put off seeing a doctor for financial reasons? Had they lost a job or had hours reduced? Were they receiving food stamps or unemployment benefits?

The most commonly reported economic insecurity reveals a human suffering more visceral, and perhaps less publicized, than layoffs or unemployment rolls: food insecurity, with 36 percent of respondents saying they’d experienced it. It’s possible that’s the budgetary item Americans feel they have the most control over (compared to whether they pay a monthly bill or not, for example), and thus find it easiest to cut. It’s not specified whether “cutting back to save money” means going hungry or forgoing an $8 bag of almonds.

More blacks than Hispanics or whites have had to cut back on food for economic reasons, although there’s variance even among whites based on class, with a college education remaining a strong predictor of who’s not going to have to make sacrifices at the dinner table.

PRRI created a composite index based on Americans’ experiences with these six forms of insecurity, generating four tiered categories of insecurity — high, moderate, low and no reported insecurity.

Courtesy of the Public Religion Research Institute’s report, “Economic Insecurity, Rising Inequality, and Doubts about the Future.” Click the graph for the full report.

Although nearly 40 percent don’t report any insecurity, the insecurities Americans do feel aren’t confined to the officially poor. Almost half of respondents who have household incomes of between $30,000 and $49,000 live in high or moderate economic insecurity households.

Class is yet another area where Americans’ outlooks have soured. The percent of Americans self-identifying as part of the middle class has dropped from 2012 by 4 percentage points, while the percentage identifying as working class has increased by the same amount — not much of a surprise given pessimistic attitudes about the American dream.

Any assessment of economic popular opinion necessarily carries political overtones, particularly when Americans cite the economy as the most decisive issue heading into this fall’s midterm elections.

“Republicans are more likely to report being in ‘good’ or ‘excellent’ financial shape than Democrats.”

But disagreement about whether the economy has improved over the last two years runs along party lines. Forty-eight percent of Democrats think it has, while only 15 percent of Republicans think so. Republicans, however, are more likely to report being in “good” or “excellent” financial shape than Democrats. Part of this contradiction may reflect the fact that economic sentiments are, at least in part, a referendum on the party in the White House; thus, it’s to be expected that Republicans would have a much lower opinion of economic progress since President Obama was re-elected. Furthermore, traditionally Democratic voting blocs — blacks and Hispanics — have a “substantially more negative” assessment of their own financial well-being, according to the report, than do white Americans, a demographic Mitt Romney carried overwhelming in 2012.

There’s also political disagreement about the role government should play in improving the economy. Of course, the source of that disagreement often stems from what Americans think the problems are. Slightly more than half of Americans agree that unequal opportunity is among the country’s biggest problems, with over 70 percent of Democrats sharing this sentiment and 34 percent of Republicans. Substantially more black Americans (76 percent) than white Americans (50 percent) feel this way. In fact, 42 percent of whites don’t think it’s a problem if, as PRRI phrases, “some people have more of a chance in life than others.”

When government intervention is defined abstractly, 66 percent of Americans say they support the state doing more to reduce the wealth gap — again with sharp partisan divergences. 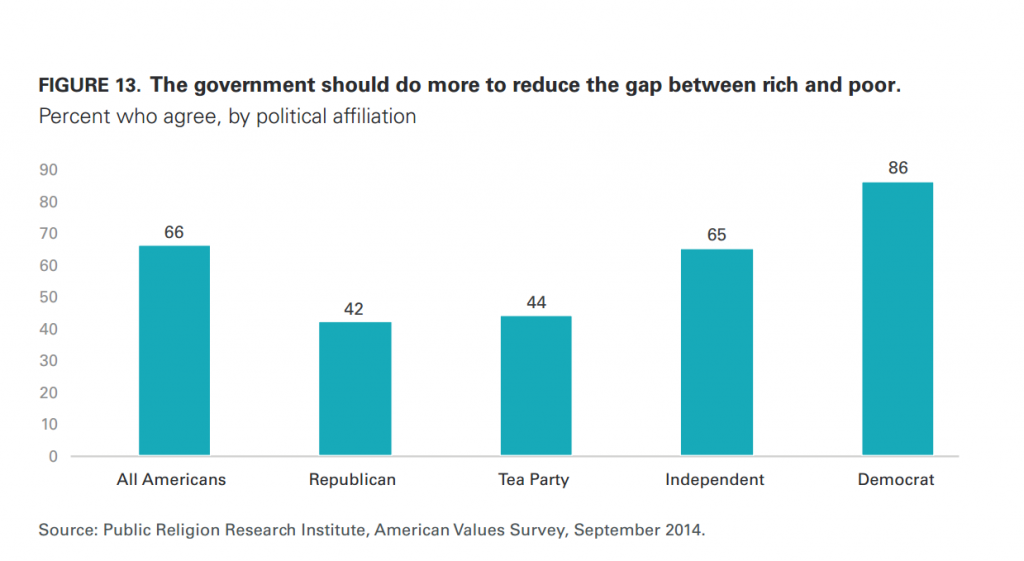 And just how should government get involved? More than half of Americans (57 percent) back what’s a persistently sticky issue in Congress: raising taxes on Americans who make more than $250,000 a year, although support has decreased slightly from 2012.

An even higher percentage (69 percent) support increasing the minimum wage to $10.10, which Mr. Obama proposed in his State of the Union address in January, but which has gained little traction in Congress since being introduced last year by Sen. Tom Harkin, D-Iowa, and Rep. George Miller, D-Calif., both of whom are retiring at the end of this term. Most of the recent movement on the minimum wage has been at the state and local level, as Making Sen$e reported from Seattle and one of its suburbs earlier this year.

Paid family leave, the economic benefits of which Making Sen$e has also discussed, gets 78 percent support, and paid sick-time, which, as we’ve reported, carries benefits for both workers and consumers, earns a whopping 81 percent support.

The PRRI survey was conducted on landlines and cellphones in English and Spanish from July 21 to August 15.

Left: Photo by Flickr user No Crop Photo. Nearly fifty percent of American adults no longer believe in the American dream and think their children will be worse off financially than their generation.