After the passage of the 2018 farm bill, which opened the door to industrial hemp production, farmers and business owners started planning for a big year for the crop in 2019. But for now, they will have to wait.

Since the government shut down last month, the Department of Agriculture, one of the federal agencies closed by the shutdown, hasn’t been able to approve new hemp cultivation plans. Without the approval, hemp can’t be legally harvested and processed in the U.S.

Because of the shutdown, the Agriculture Department temporarily stopped backing some mortgages and other loans to farmers and rural residents. Last Wednesday, the agency extended the deadline for farmers to apply for direct aid — help the Trump administration promised to help cover losses incurred by the United States’ trade war with China.

The 2018 farm bill, signed by President Donald Trump in the days before the shutdown began, removed hemp with less than 0.3 percent of the psychoactive chemical tetrahydrocannabinol (THC) from the controlled substance list, where it had been since 1970 alongside marijuana and other drugs.

This opened the door for more commercialization, a huge victory for hemp advocates, who say it will revive struggling agricultural communities by introducing a viable new crop, create jobs and help spur medical advancements.

Because of the shutdown, those who hoped to take advantage of hemp’s projected growth have had to wait to invest or add the plant to their crops.

Farmers already approved for hemp, and businesses sourcing from them or European producers, aren’t affected by the shutdown. But those who hoped to take advantage of the industry’s projected growth have had to push off plans to invest or add the plant to their crops for the coming year.

In 2017, the market for “hemp-derived CBD” hit nearly $300 million, according to an industry report, and is expected to grow to more than $1 billion in the next three years. (Other predictions have the hemp industry growing even more rapidly and topping $20 billion by 2022).

That potential has been put on hold for farmers, companies and industry groups who have worked for years to revive a dormant industry that was once at the heart of American agribusiness.

A victory, followed by uncertainty

Marijuana contains large amounts of THC, which gets users high. The federal requirement for industrial hemp is less than 0.3 percent THC; it has higher amounts of cannabidiol, or CBD, a non-psychoactive compound used in medicinal and cosmetic products.

Until late December, Hemp had been outlawed or highly regulated in the U.S. since the Great Depression. Prior to 2014, hemp production and the sale of hemp-derived products were legal in some U.S. states, even while they remained illegal under federal law. The 2014 farm bill created state-managed pilot programs for hemp production, but did not fully legalize industrial hemp, so leading advocates continued to push Congress for broader changes.

Last April, Senate Majority Leader Mitch McConnell, R-Ky., and Oregon Democratic Sens. Ron Wyden and Jeff Merkley introduced bipartisan legislation to legalize hemp and remove it from the controlled substances list. From there, the measure gained traction in Congress and was ultimately included in the broader farm bill. 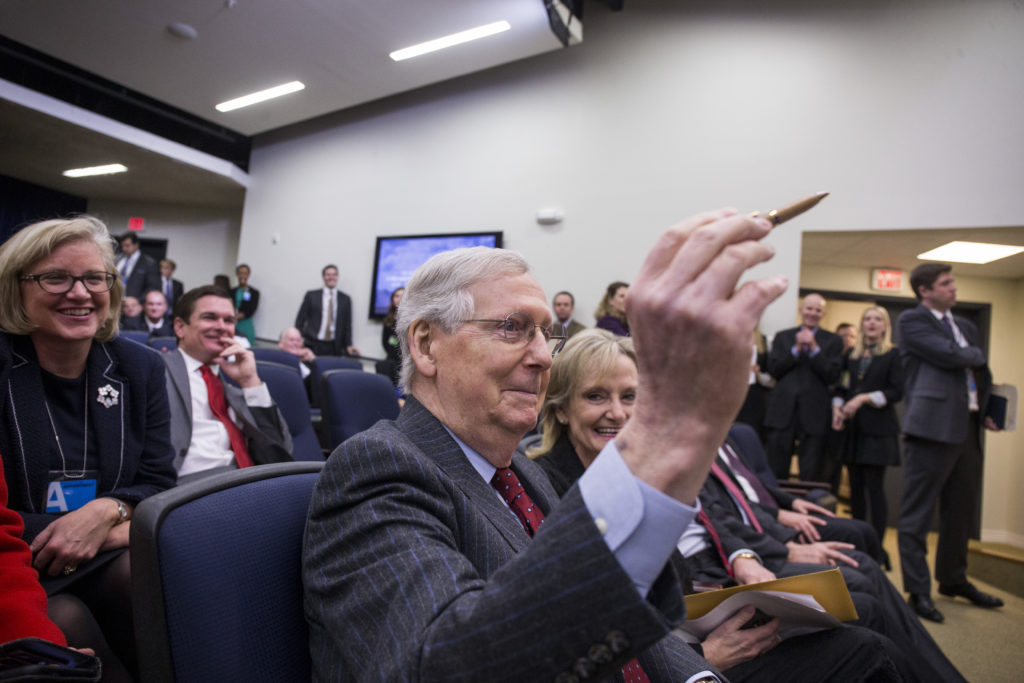 Senate Majority Leader Mitch McConnell, R-Ky., holds a hemp pen before the start of a signing ceremony for the 2018 farm bill at the White House on Thursday, Dec. 20, 2018. Photographer: Zach Gibson/Bloomberg via Getty Images

While the farm bill legalized hemp production, it created tight federal regulations for the crop, including rules states must follow to manage the industry and federal standards for CBD products. States with hemp pilot programs and already in place — like McConnell’s home state of Kentucky — are poised to be front in line to meet the farm bill’s new guidelines once the government opens up.

But other states starting from scratch may find themselves in a sprint to get federal approval in time for growers to take advantage of the spring planting season.

“The wonderful new legislation passed just in time for this shutdown,” said Stuart Titus, the CEO of Medical Marijuana, Inc., a holding company with subsidiaries that make and sell hemp-based products.

Even when the government shutdown ends, the fledgling hemp industry will still face numerous obstacles.

Many growers had initially hoped to meet all the necessary federal guidelines by late February, to allow enough time to plan crop rotations and source seeds. Seeds are generally planted starting in April, and harvesting takes place in the months of September and October, Titus said. The shutdown has thrown that timeline off.

“Some of the farmers might possibly miss out on planting a hemp crop” this spring, Titus said.

And even when the government shutdown ends, the fledgling hemp industry will still face numerous obstacles. Few expect the industry to explode overnight.

Still, hemp producers and industry advocates remain hopeful that 2019 can be a breakthrough year, with growth opportunities in everything from hemp products to new medical research.

Hemp has major benefits as a rotational crop, because it cleans polluted soil in a process called phytoremediation, which leaves the ground virtually weed-free and healthier for other crops.

Hemp also has potential to become a financially lucrative crop. Though no formal commodity pricing exists, state prices for hemp are still higher than most traditional crops. In Colorado, the average price of the hemp flower, the main part of the plant that’s harvested for CBD, is $28 per pound. In Oregon, the flower is priced at $100 per pound. In comparison, corn currently stands at $3 to 4 per bushel and wheat is $5.23 per bushel.

Producers will face the challenge of jump-starting an industry that does not have a supply chain and other infrastructure outside of state-regulated pilot programs.

The growth of the hemp industry “will be a function of how states respond to this new legislation,” said Randy Fortenbery, an economics professor at Washington State University. 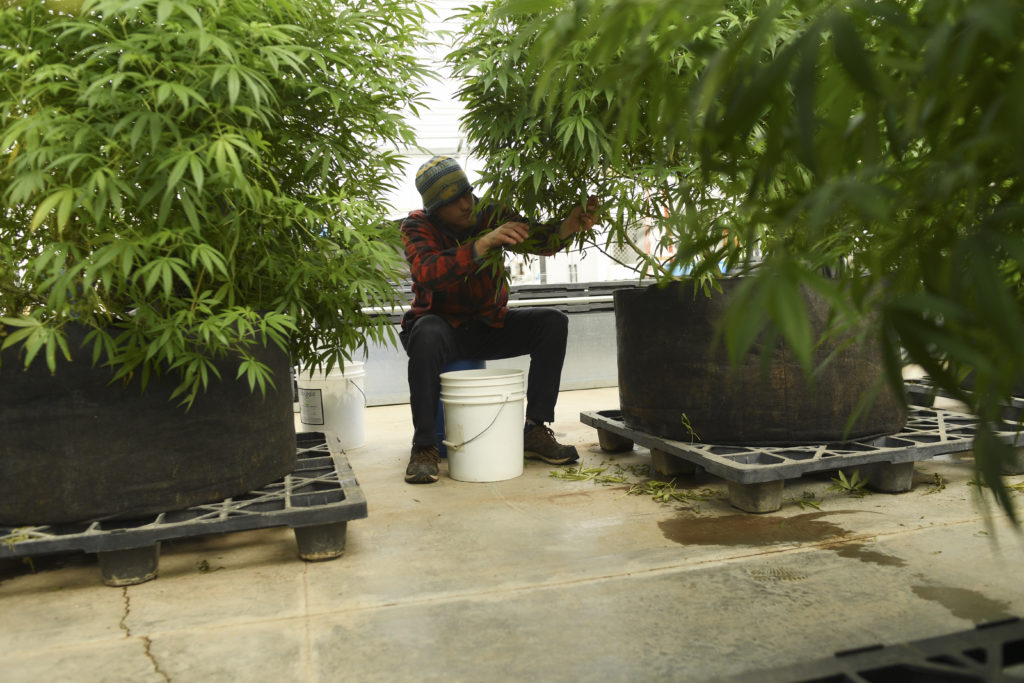 A worker trims a plan at a hemp farm in Colorado on Nov. 7, 2018. The 2018 farm bill legalized industrial hemp, a big win for industry advocates. (File photo by RJ Sangosti/The Denver Post via Getty Images)

How states respond remains unclear, since the farm bill gave states wiggle room to adopt their own laws to restrict and regulate the production of industrial hemp.

Producers should also not think of hemp as a magic bullet, Fortenberry cautioned. Take Canada, he offered as an example. Commercial hemp cultivation has been legalized in Canada since 1998, but is still only planted on about 1 percent of the nation’s available farmland.

“The same thing will happen in the U.S.,” he said.

Yet Fortenbery said he was still optimistic. Legalizing industrial hemp “is a benefit,” he added. “I am just cautious of how quickly the full benefits realize.”

The farm bill clarified one area of the law around hemp production that could accelerate growth, once the shutdown ends and production picks up.

The pilot programs created under the Obama administration through the 2014 Farm Bill allowed for the cultivation of hemp for research purposes only. The research was also limited to state departments of agriculture or institutions of higher learning. Since then, NIH-funded research for cannabidiol (CBD) and cannabinoid went from zero in 2014 to a combined $155 million in 2017.

The 2018 farm bill distinguished hemp and its byproducts from marijuana — a change businesses say will end years of operating in a regulatory gray area.

But the 2018 farm bill went further by distinguishing hemp and its byproducts from marijuana — a change businesses say will end years of operating in a regulatory gray area.

Under the new legislation, companies will now be able to access loans and other banking services, making it easier to pay employees and ship products.

Over the last two and a half years, CBDistillery, the largest online retailer of CBD products, lost more than $1.5 million through credit card processing alone and more than $500,000 worth of products seized during shipping because of hemp’s status as a controlled substance and states’ varying hemp laws. The company was also rejected by 20 different banks, according to the CEO, Chase Terwilliger.

CBDistillery still made $8 million in revenue in 2017 and $60 million in 2018, according to Terwilliger. He said the company is forecasted to make $150 million and double its workforce in 2019.

“It’s very evident from where we sit and the demand that we’ve had” that the industry is ready to expand dramatically, Terwilliger said, especially once consumers understand hemp products better.

“Imagine when people are educated on this product and research comes out that validates why people are using this,” Terwilliger said.

A debate over medical research 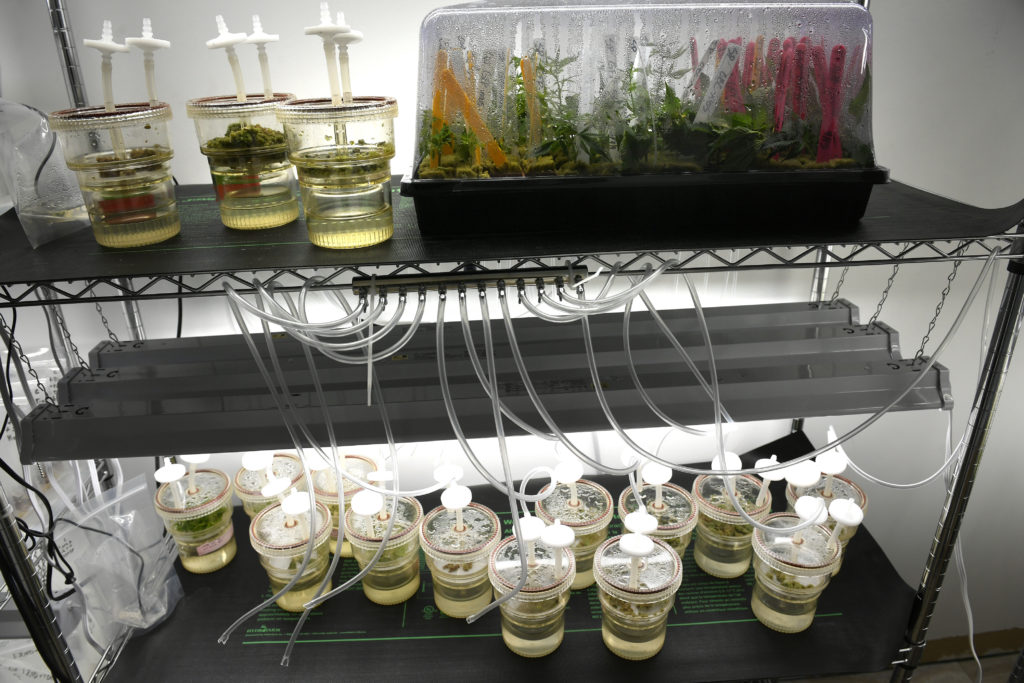 Industry experts expect the farm bill will bolster advances in hemp research. Titus said he looks forward to clinical trials that prove the long-term benefits of CBD and can see doctors recommending a daily dose of CBD for overall health and wellness in the future, in the same way they would Vitamin C.

According to a recent study by New Frontier Data, a data and analytics reporting firm in the cannabis industry, participants who took an average of 2.8 pharmaceutical pills per day reduced their pill intake to just 0.7 after taking a daily dose of CBD for three to four months.

Dozens of studies into to the medical benefits of CBD are underway, but researchers believe it can help treat a number of health issues, from alcohol use disorder to Parkinson’s disease and some forms of epilepsy (one new such drug for the condition, Epidiolex, was approved by the FDA in June).

“Hemp and related products have become the wonder item,” said Matthew Holt, a professor of agribusiness and econometrics at Virginia Tech.

There’s little research into whether consumer products touting CBD benefits — from food to bath soap– actually do what they claim. Some are skeptical that the products, which often contain very low doses of CBD, make a significant difference.

Companies aren’t allowed to directly market any of those benefits until they are approved by the FDA.

But Food and Drug Administration Commissioner Scott Gottlieb sent out a warning after the farm bill was signed, suggesting the Trump administration could intervene.

Despite the obstacles and uncertainty, leaders in the hemp industry are still planning to move forward — as soon the government shutdown ends

The U.S. Hemp Authority — a non-governmental agency supported by the Hemp Roundtable, a key lobbying group — is waiting for the government to open to begin certifying CBD products. The group’s goal: bringing U.S. Hemp Authority-certified products to market as early as this spring.

Left: BENTON, ME - JUNE 14: Ben Rooney, co-owner of Wild Folk Farm in Benton, Maine, moves hemp clones in preparation for planting in June, 2018. Hemp production in Maine and other states is expected to increase this year. (Staff photo by Ben McCanna/Portland Press Herald via Getty Images)