Why it’s not a beautiful day in the neighborhood

Editor’s Note: When’s the last time you gave your neighbor a cup of sugar or visited your great aunt Mary in her nursing home?

Generosity often conjures images of financial or material giving, but that’s hardly its only form. Volunteering time and talent, even spending time with neighbors and family, is just as generous. It’s a form of giving with no inherent financial obligation, but like financial giving, it carries benefits for the giver, not just the receiver. Is there any more symbiotic form of giving that genuinely enjoying another person’s company? 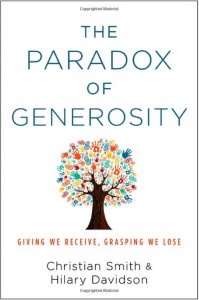 And yet, despite it being good for us, many Americans don’t practice this form of giving. That’s what University of Notre Dame’s Christian Smith and Hilary Davidson call the “paradox of generosity” in their book of the same title. As they outlined on Making Sen$e Wednesday, this paradox is readily apparent when it comes to voluntarily financial donations.

In this second adaption from the third chapter of their book, Smith and Davidson take a closer look at just how many of us bother to yell across our fences — as Mr. Rogers so famously crooned, “Won’t you be my neighbor?”

Financial giving is only one form of generosity in which Americans might engage. What about others, such as volunteering for or through an organization? 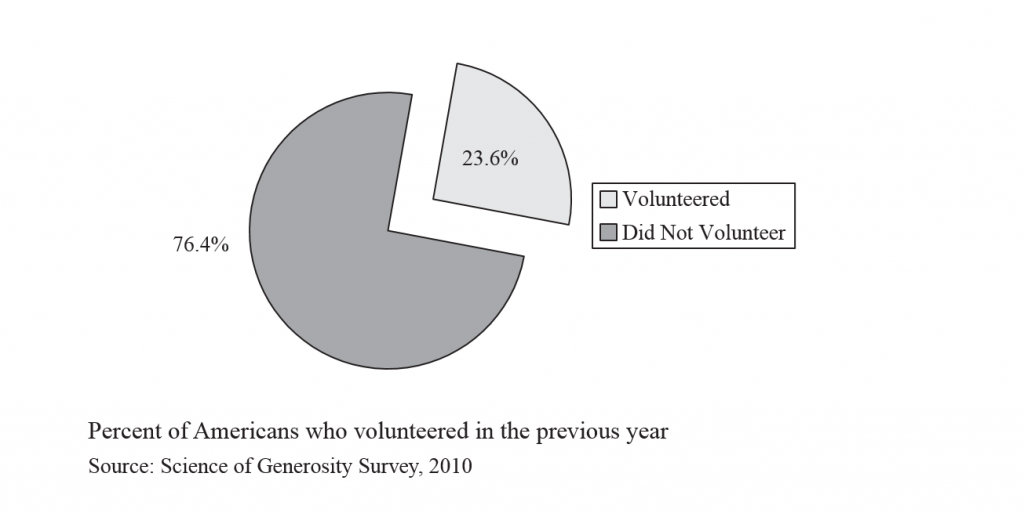 But, according to one study by the Fidelity Charitable Gift Fund, one in three Americans who do not volunteer say they do not simply because they “are just not interested.”

What about the number of hours that Americans spend volunteering? A whopping 76 percent simply do not volunteer any hours. Ten percent volunteer 1 to 10 hours per month and 11 to 39 hours per month, respectively. Finally, less than 4 percent (3.8 percent) volunteer more than 40 hours per month. Once again, here we see that a small group of relatively generous Americans devotes a lot of time to volunteering. The vast majority, however, volunteer not at all. 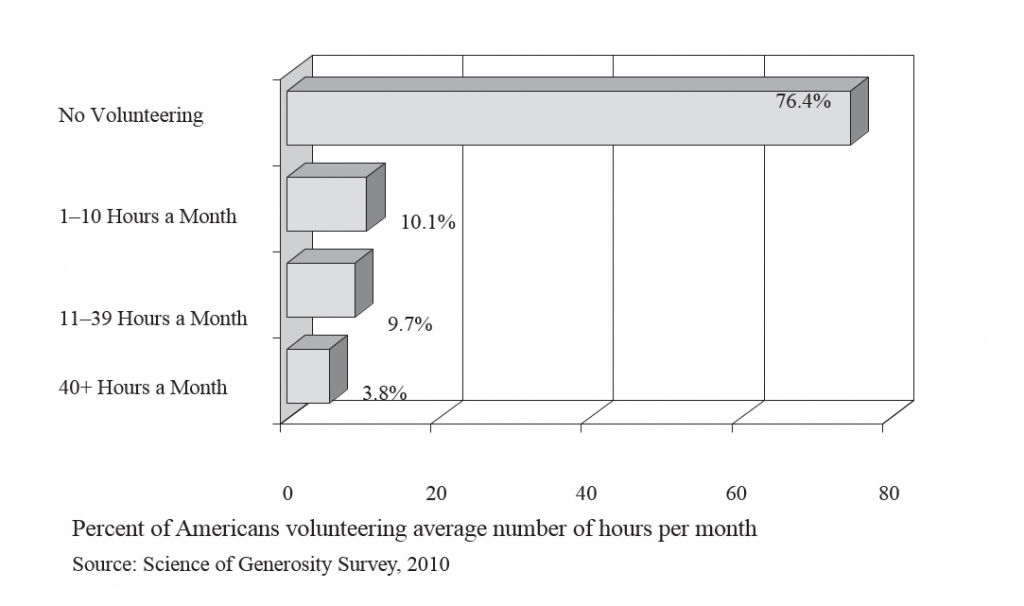 Besides volunteering your time for an official cause or organization, there are other ways to be generous that do not involve giving away money. Taking time to care for people, investing emotionally in the needs of others or even working to be sensitive to the conditions of other people are all more informal forms of generosity. We call this “relational generosity.”

“Relational and neighborly generosity are just as accessible to people living on a shoestring.”

Plenty of us also expend time and energy taking care of neighbors, friends and family in what we’re calling “neighborly generosity.” You might watch over houses and property for people who are away, take care of others’ children or have people over to visit. None of these requires being rich, as we might think to be the case for generous financial giving. Relational and neighborly generosity are just as accessible to people living on a shoestring.

In keeping with the larger patterns observed about generosity, we’ve seen that more relationally generous Americans and those with higher neighborly-generosity scores also experience the same benefits of well-being. Generous practices, as opposed to single generous acts, are positively related to greater happiness, physical health, the avoidance of depression, sense of life purpose, and interest in personal growth. That positive relationship is not absolute or overwhelming. But it is clear, consistent, and statistically significant — strong enough to make a real difference in people’s lives.

But just how relationally generous are Americans? And how much neighborly generosity do they exhibit? Since relational generosity was measured using a multi-question scale, we calculated the numbers here as those who on average scored “strongly” on this set of questions. We estimate that 25 percent did score strongly. The remaining three-quarters scored less-than-strongly on relational generosity. Scoring less-than-strongly on this scale does not mean that three-fourths of Americans are positively ungenerous when it comes to relationships. They simply did not score on the high end of the scale. Some of them are moderately generous relationally. Some of them are very ungenerous relationally, again by their own admission in their survey answers.

Sizeable chunks of Americans appear to be exercising different forms of neighborly generosity. Still, significant proportions of Americans are not. About 9 percent of Americans say they never visited with relatives in person during the previous year, and 13 percent never had friends over to their homes for a visit. Thirty percent did not help friends or neighbors with a job they were working on, 34 percent never watched over a house or property of a friend who was away, and 42 percent had never helped care for anyone else’s children during the previous year. 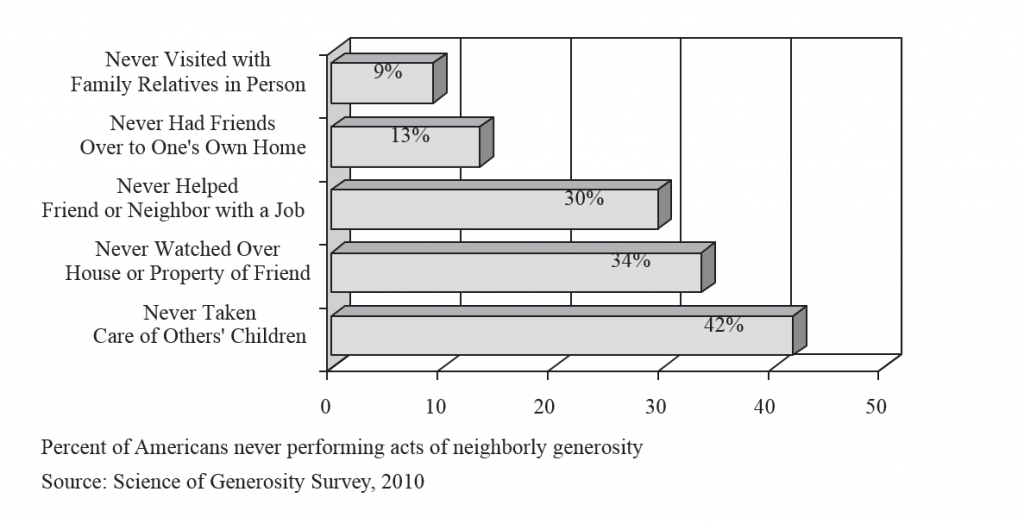 Of course, not having done something doesn’t mean a person was unwilling; they may just not have had the opportunity. Some Americans do not have neighbors or family members. Others may not have friends. Some may live in neighborhoods where residents simply do not ask favors of each other. Even so, we think that some of these facts themselves are revealing when it comes to practicing generosity. And we think that they do not fully account for some of these substantial cases of never practicing these forms of neighborly generosity.

Our position here is not one of condemnation. Rather, we simply observe that at least some Americans probably have the opportunity and ability to increase their practices of relational generosity, and thereby enjoy the health, happiness, and purpose benefits that tend to come along with that.

Left: Americans could do a better job of practicing neighborly generosity, according to research from the University of Notre Dame. Photo by Flickr user Cubosh.

WATCH: ‘No mask, no service’ rule is OK for businesses, Cuomo says

WATCH: Labor officials testify on how the government is protecting workers from COVID-19

41 million have lost jobs since virus hit, but layoffs slow