Why More Religious Singles Are Searching for Love Online 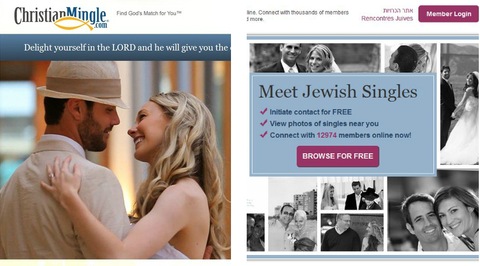 Faith-based online dating websites like ChristianMingle for Christians and JDate for Jews have increased in popularity since 2008. Images courtesy of Spark Network.

Jen Spencer had the jitters before she met up with her date Kenneth at an amusement park in the summer of 2012. It was a first date, but they had been talking for months.

“It was exciting and relieving,” said Spencer. “Once the first minute you meet face-to-face passes, it’s like ‘I can breath again.'”

The two met on ChristianMingle, an online dating website for Christians. The site has gained 5 million new users in the last two years.

Even though the couple didn’t last past the summer, Spencer, 32, was nevertheless grateful to have met a like-minded man who shared her passion for the Christian faith.

“If I said I didn’t want somebody without a Christian background, I would be lying to myself, and wasting my time,” she said. With the tensions and conflicts that can exist in a relationship, Spencer said the foundation of faith becomes an important unifying force.

Sociologist Gerald Mendelsohn says the practice of choosing a romantic partner with a shared religion, culture, ethnicity and or nationality, is driving the demand for niche religious dating sites like ChristianMingle, JDate, which caters to Jewish singles, and Muslima, for Muslims. And as these sites become more popular, the dating industry rakes in higher revenues. According to a recent market research report, the dating service industry is expected to reach $2 billion this year, growing at 2.9 percent in revenue every year since 2008.

Mendelsohn says research shows that marriage among partners of the same religion is on the decline. While young people are more likely than ever to date outside their religion, those who still prefer to date within their religion are capitalizing on niche online communities.

Matt Wolf, a member of JDate, says he prefers to be with someone Jewish, but he doesn’t care whether or not they believe in God.

“It’s a cultural thing as opposed to a very religious thing,” said Wolf. “I just thought I want to raise my kids similarly to the way I was raised.”

Wolf, 29, said that many of the people he has met through JDate feel the same way. They want to share Jewish cultural traditions with their significant other.

JDate was founded in 1997 and was immediately a hit in the Jewish community. The site has 750,000 members worldwide and claims to be responsible for more Jewish marriages than all other websites combined. ChristianMingle boasts a 9 million membership base. The religious online dating community is further subdivided into sites such as CatholicMatch for Catholics, Jwed for orthodox Jews and LDSMingle for Mormons.

JDate spokesperson Arielle Schechtman says that JDate is doing more than matchmaking, they’re building the Jewish community so that traditions will be carried on.

“We say JDate makes Jews,” said Schechtman. “We build marriage, J-babies, and (the members) send us pictures of the kids.”

After working with couples for more than 15 years, Sussman said shared culture, values and traditions are crucial to sustaining relationships. But the decision to date within one’s religion should not come from external pressure. Rather, it should be the result of experience and introspection.

“It’s my responsibility to ask them why they’re making these choices,” said Sussman. She advises her clients to expand their search, and then come to the decision of whether or not they can only date within their own religion.

Working with JDate members, Schechtman said that a mother’s opinion is going to carry a certain amount of weight. She shared anecdotal stories about mothers who purchased their sons or daughters’ JDate subscriptions, helped them with their profiles and weighed in on who they should contact.

While the popularity of niche religious websites is on the rise, in a study of a generic dating website, Mendelsohn found that the younger the member, the less likely he or she will have a religious preference.

“It’s ironic that I chose to join a religious-based website even though I’m not religious,” Wolf said, “And people who join those sites may not be religious. We all just want the shared interests and values.”