One British artist, known for his triptych compositions, paints another British artist, known for his truthful nudes — with all his clothes on. That would be a short description for Francis Bacon’s panels, Three Studies of Lucien Freud, which are up for auction Tuesday evening at Christie’s. The complete triptych is expected to surpass the 2008 sale of a piece called Triptych 1976 by Bacon for $86.3 million.

The blog galleryIntell summarizes it well:

Three Studies of Lucian Freud is a “conversation” between the two pillars of 20th-century figurative art and is one of only two existing full-length triptychs of Lucian Freud. The painting was completed in 1969, some 25 years after the two artists first met and shows an explicit intimacy between the two friends. The triptych’s provenance also makes it a highly prized addition to any contemporary collection, as it was most notably part of the artist’s retrospective at the Grand Palais in Paris in 1971-72. 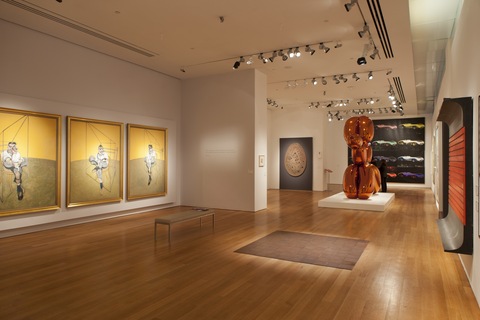 The two painters met after being introduced by a mutual friend, Graham Sutherland.

Freud distinguished his and his friend’s artistic abilities in an interview with former New York Times’ chief art critic Michael Kimmelman. “Francis Bacon would say that he felt he was giving art what he thought it previously lacked. With me, it’s what Yeats called the fascination with what’s difficult. I’m only trying to do what I can’t do.”

If you want to impress during a happy hour or your next cocktail party, read Hyperallergic’s primer on how to talk about the art of Francis Bacon and Lucien Freud

And read this obit for Lucien Freud by New York magazine art critic, Jerry Saltz, on why artists you don’t love can still be great.