Participation in youth football on the decline 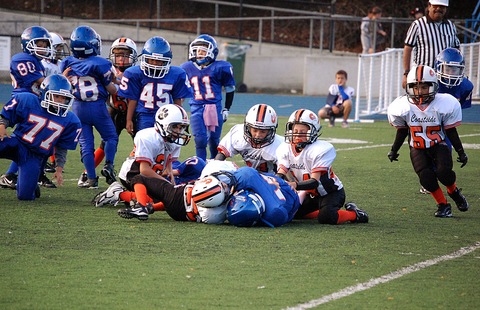 The chief medical officer for the Pop Warner youth football league believes that concern over head injuries has led to a decline in participation. Photo by Flickr User wynner3

Officials from Pop Warner told ESPN’s Steve Fainaru and Mark Fainaru-Wada that there are several factors contributing to the decline, but the program’s chief medical officer believes the number one cause is concerns about head injuries.
Other youth football leagues have been experiencing similar declining involvement rates. USA Football, a national governing body partially funded by the NFL, reported that participation among players ages 6 to 14 dropped to 2.8 million from 3 million, in 2011 alone.

The NFL Players Union estimates that 60 to 70 percent of all NFL players began playing football in the Pop Warner program. But there is concern about the effect head injuries will have on the developing brains of young players.

Many former professional football players have openly blamed an array of neurological diseases, including dementia and a condition called chronic traumatic encephalopathy, on head injuries they sustained while playing in the NFL. The National Football League recently reached a $765 million settlement with former players who have brain-related illnesses.

In 2012, Pop Warner cut back on the amount of tackling allowed during practices, but some believe that more needs to be done to avoid head to head collisions.