2010: The Year of the Vanishing Candidate: Now You See Them, Now You Don’t

This year, mostly you don’t. Once upon a time, not so long ago, candidates in competitive races sought out the news media to help get their messages across to the voters, and they scheduled frequent public events so they could speak in person to large groups.

But in this midterm election year, candidates with serious opponents are more often observed ducking debates, withholding schedules till the last possible minute, and holding few mega-events. They mostly face the public through their paid TV advertising, and the odd YouTube video. In truth, this pattern probably started in earlier elections, but it seems to have reached critical mass this year. 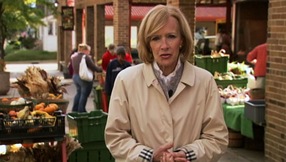 I saw it first hand this past weekend in Wisconsin, where producer Mary Jo Brooks, videographer Max Miller and I flew to cover the hot Senate contest there between Democrat Russ Feingold and Republican challenger Ron Johnson (the story aired on the NewsHour on Oct. 5). Eighteen-year incumbent Feingold was long thought to have the race sewn up, but wealthy plastics manufacturer and political novice Johnson was drawn to last year’s tea party rallies and the anger expressed at Washington — and parlayed that into a decision to run. Johnson has shocked much of Wisconsin’s political establishment with a lead of several points over Feingold in the latest poll of likely voters.

It was not until two days before we arrived that we were given access to the Johnson schedule. We met up with him in Madison at a meeting of about 25 dairy businesspeople, then followed him briefly shaking hands at a Dairy Expo – which featured a robotic milking machine. I was told Johnson had a tight schedule, and was given 15 minutes for a sit-down interview, which I pleaded to stretch to 20. He was gracious in person, but his staffers, experienced Republican party operatives, made it clear my time with the candidate, whom I’d never met before, would be sharply limited.

We met up with Johnson again the next day, at a small invitation-only Wisconsin-Michigan football-watching party at a Milwaukee pub. This time, Johnson’s wife and grown children were on hand, and they chatted easily with the handful of press people in the room. But the happy football-focused atmosphere lent itself to light socializing more than questions about the candidate’s position on issues.

Getting the schedule for Sen. Feingold wasn’t much easier. We were told his schedule hadn’t been “firmed up,” and waited until Thursday for a peek at what he had planned for Saturday. The first event was a press conference preceding a giant Farm Aid concert, where Feingold was just one of several celebrities to speak. The others included Willie Nelson, John Cougar Mellencamp and Dave Matthews. We recorded his brief comments there, then saw him shake a few hands, before he left for Racine.

On Sunday, we were told he’d drop by a Steelworkers tailgate party ahead of a Green Bay Packers football game. He shook hands with a couple dozen supporters, then met us at his Green Bay campaign headquarters to sit down for about 15 or 20 minutes. Like Johnson, he was gracious, and there was no time limit, but it was clear that he – or his staff? – wanted to keep him moving.

Respected political journalist Jonathan Martin wrote about the “missing candidates” this year in yesterday’s edition of Politico. He described it as “mostly, but not entirely, a Republican phenomenon.” He cited examples of GOP candidates like Johnson in Wisconsin, Rand Paul in Kentucky, Christine O’Donnell in Delaware and Ken Buck in Colorado. He singled out Buck for going “nine consecutive days without holding a public event.”

Martin cited Buck’s explanation – that he’s aware of being followed by staffers working for his opponent, trying to record him making a gaffe. In a related vein, in Wisconsin, we saw Feingold activists show up outside the Johnson football-watching party at the Milwaukee pub, dressed in costumes. One was “Uncle Sam,” holding a giant check made out to Johnson’s company from the federal government – emphasizing a federal subsidy his firm received years ago despite his criticism of government spending. Johnson campaign staffers were clearly not thrilled to see Uncle Sam or his friends.

There’s no doubt that the hyper-speed media environment we live in, has contributed to this full-scale retreat by candidates in competitive races, into the safest possible surroundings, in order to minimize press questions, and certainly any surprises by the opposition. At any given moment, one misspoken sentence can become a sensation on the Internet.

It probably sounds like inside baseball, but it is troubling when one group of reporters, who want to do a thorough job of covering a campaign and the candidates, is told not to share information with other reporters about where events are being held, since the campaign wants to control and parcel out media access. It may be clever handling of the candidate’s image, but it leaves the press with a bad taste in its mouth about modern-day politics.