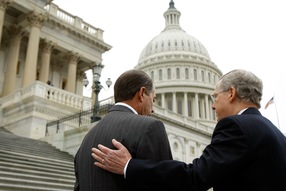 Now that we can place the term “shellacking” right next to “thumpin’ ” in the post-election political dictionary, let’s sort through the wreckage and victories from the midterm elections to answer the five questions I posed in this space last week.

1. Who voted?
Two years after President Obama was catapulted into office on the strength of an expanded electoral map that had turned dramatically blue, 29 million of his voters decided this time they would stay home.

Voters under age 30, who made up 18 percent of the electorate 24 months ago, dropped to 11 percent this time – a notch below the 12 percent who cast votes in 2006. And the ones who did show up, were less likely to vote for Democrats.

And as NewsHour political editor David Chalian pointed out on the day after the election,
Democrats spent $30 million, and the President lost his voice at several pre-election rallies trying to goose turnout among first-time voters, African Americans and Hispanics which never materialized.

Who did show up? Independent voters. And 56 percent of them cast their ballots for Republicans – almost the exact opposite of what happened in 2006.

2. Whither Harry Reid and Nancy Pelosi?
Talk about a mixed night. Senate Majority Leader Reid reached back to his welterweight fighter roots to defeat Tea Party-backed candidate Sharron Angle. Reid will return to Washington to lead a shaken U.S. Senate where Democrats will hold a 53-seat majority well short of the 60-seat minimum needed to end a filibuster. Plus, newly-elected Democrats like West Virginia’s Joe Manchin – who won while attacking the President’s agenda — are unlikely to be reliable supporters.

The mystery of Nancy Pelosi’s future resolved itself Friday afternoon, when she announced she would run for House Minority leader. In releasing a statement that declared her work “far from finished,” she effectively shut down all speculation that she would retire to either the back bench or to San Francisco. At the same time, she squashed the ambitions of any Democrat (including members of the decimated Blue Dog caucus) to take House Democrats in a more conservative direction.

3. How many of the outsiders won, and what happens now?
The roll call is long — Marco Rubio of Florida, Rand Paul of Kentucky, Pat Toomey of Pennsylvania, Mike Lee of Utah and Rob Portman of Ohio — and that’s just in the Senate GOP caucus.

In the House, where far more seats were at stake, 60 Democratic seats switched to Republican, washing a host of lawmakers who had been in Washington for 30 years or more out of office.

We know who the new faces are, but we don’t yet know what they will be able to accomplish. Few back benches are more remote than those in the United States Congress. But some of these new lawmakers – especially Rubio and Paul – will attract immediate and sustained attention from party leaders and the media. Party leaders need them, and we can’t help ourselves.

4. Where did the cash make the difference?
Well, not in California, where GOP gubernatorial candidate Meg Whitman spent more that $150 million of her own money to lose to Democrat Jerry Brown. Politico’s Jeanne Cummings estimates she spent $47 for every vote she got in her 13 point loss, while Brown – who raised far less – spent only $6.34 per vote.

And in Connecticut, wrestling executive Linda McMahon dipped into her own pocket to spend $47 million on her failed Senate race.

But cash clearly did make a difference in many other non-self-funded races. Although the final numbers are not in, prodigious and targeted spending from outside groups played a key role in driving some of election night’s closest contests – including in Colorado, Nevada and Washington State.

5. What did we learn about the power of Sarah Palin and the Tea Party?
A few of the high-profile candidates backed by 2008 GOP Vice Presidential nominee Sarah Palin flamed out in spectacular fashion – among them Colorado’s Ken Buck, Nevada’s Sharron Angle and Delaware’s Christine O’Donnell.

But Palin and her tea party supporters cannot be counted out. They scored important victories, many of them – like governors-elect Nikki Haley in South Carolina and Susana Martinez in New Mexico — showcased in this Reaganesque video posted by Palin’s political action committee.

A remarkable number of them pledged their allegiance to the movement, not to the Republican Party, mentioning in their election night speeches that they plan to challenge Republicans as well as Democrats once they get to Washington.

“You better not go up there and become like everybody else we have voted for,” Florida’s Marco Rubio said on his first day as Senator-elect. “Because, if you do, you will never get a third chance and, more importantly, our country will suffer.”

This only raises more questions. Among them–when is a compromise not a compromise? On tax cuts? Health care? Government spending? John Boehner, Mitch McConnell, Harry Reid and President Obama are all talking negotiation, but it’s clear they are not using the same dictionary.

The election is so not over.

This post was revised at 3:00 p.m. ET to reflect Nancy Pelosi’s decision to run for House Minority Leader, news from the Washington State Senate race and to correct a date reference.