Republican Karen Handel’s victory in the Georgia special election Tuesday dealt a blow to Democrats. The party wanted to deliver President Donald Trump and Republicans in Congress a warning shot ahead of the 2018 midterm elections. Instead, Democrats are now winless in the four congressional races that have been held since Mr. Trump took office. Here are some takeaways as the dust settles on the most expensive House election in history.

Jon Ossoff’s campaign in Georgia’s Sixth Congressional District was not devoid of policy or substance. The Democrat called for more research and funding for the biotech sector, a reduction in wasteful government spending, and increased investment in education, among other issues. But at its core, Ossoff’s campaign — for many of his supporters, donors and national Democrats — was about one thing and one thing only: opposing Trump. And that wasn’t enough.

It rarely is. Voters like to feel that they’re voting for something or someone. Barack Obama ran against George W. Bush’s record in 2008, but his campaign also had a set of unifying principles, however vague they might have been, that gave his supporters something to rally around. The same thing goes for Trump. Part of his message last year was that establishment politicians like Obama and Hillary Clinton had failed; but he also ran on a platform of economic populism that motivated his base to go to the polls.

Of course, presidential elections are bigger and more complex than congressional races, not to mention off-year special elections. And sometimes, simply being against something is enough. In 2010, Republicans won 63 House seats — and retook control of the chamber — on a platform that largely consisted of opposing Obama and Obamacare. But in that case, the GOP had a specific Democratic achievement to oppose.

Trump is not linked to a comparable accomplishment, at least not yet. Until Republicans in Congress make progress on their legislative agenda, all Democrats like Ossoff have to rail against is Trump’s 2016 campaign rhetoric, and his stumbles and crises in office. The Russia investigations could grow into a potent campaign issue by this time next year. And there could be new laws for Democrats to latch onto when it’s time to vote in 2018, including, potentially, a Republican health care overhaul. Still, Ossoff’s loss demonstrates that Democrats will need to offer their own vision for the future, and it can’t just be NeverTrump. 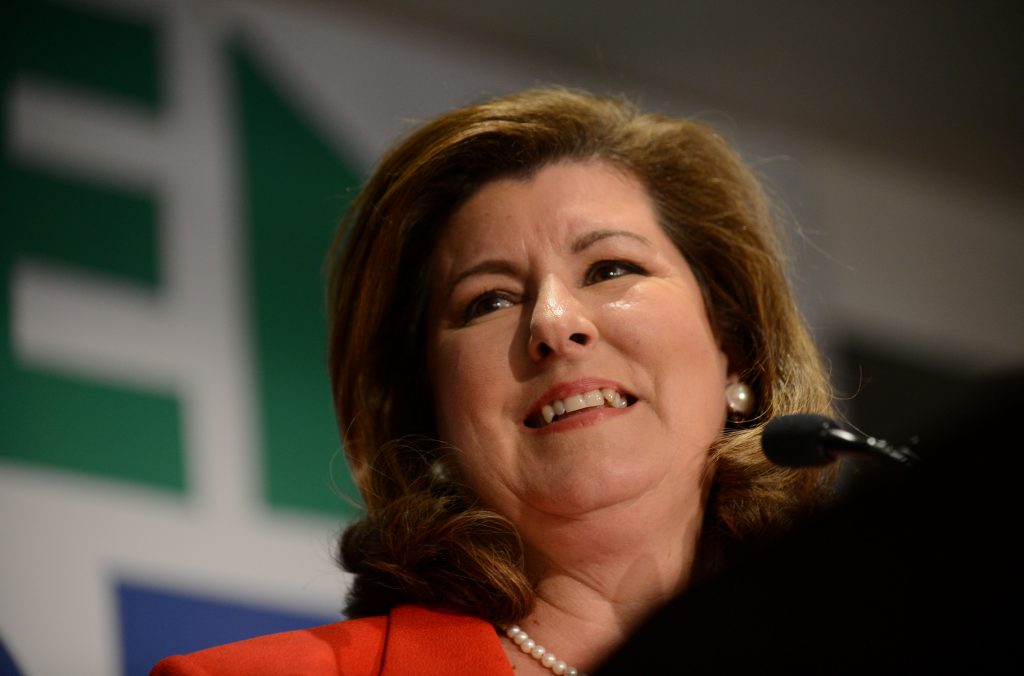 For all the attention on the Ossoff-Handel race, it’s worth remembering that it was only one contest — and a special election at that. Special elections are a window into a narrow slice of the electorate, comprised mainly of hardcore supporters on both sides who don’t seem to suffer from election fatigue. After the grueling 2016 presidential race, many Americans were ready for a break from politics. The people who voted in Georgia’s special election had no such fatigue, and for that reason alone, they aren’t representative of the national electorate.

Special elections tell us some basic things about the political mood of the country. The Georgia race reinforced the political divides that defined the 2016 presidential election, and it highlighted the Democrats’ ongoing struggle to craft a strong campaign message. Those snapshots matter.

But when it comes to predicting the future, special elections often aren’t the best barometer. As the debate about Georgia’s race raged on social media Tuesday night, some observers noted that Democrats won the first seven special elections under Obama, only to lose dozens of House seats in the 2010 midterms. A lot can and will happen between now and November 2018.

Republicans can breathe easy. Sort of.

Handel’s nearly four-point win was a welcome sign for Republicans. The GOP would have had good reason to worry if it lost a seat the party has held since 1979. Top Republicans campaigned for Handel, including Trump. The party invested political capital in the race, and it paid off. From a purely symbolic perspective, the outcome helped Republicans maintain their undefeated streak during Trump’s first months in office.

Still, the party had to work hard — and spend millions — to make sure Handel could withstand a challenge from an unknown, 30-year-old former congressional aide. That’s not a great sign for Republicans as they prepare for 2018. Worse still for the GOP, Democrats generated a lot of energy around the race despite the fact that Trump hasn’t yet signed any major bills into law. The left’s energy could grow if Trump delivers on more of his campaign promises. The election was a win for Republicans, but it still pointed to potential weak spots for the party next year.

The biggest political battle of the year (so far) didn’t take place in Atlanta’s politically moderate suburbs by accident. Georgia’s Sixth Congressional District belongs to a dying breed of moderate House seats. The reality is, there aren’t many left. In the midterm elections next year, Democrats will undoubtedly target the 23 Republican House seats that Clinton carried in 2016. But even if they won every single one, that still wouldn’t be enough for them to flip the House. 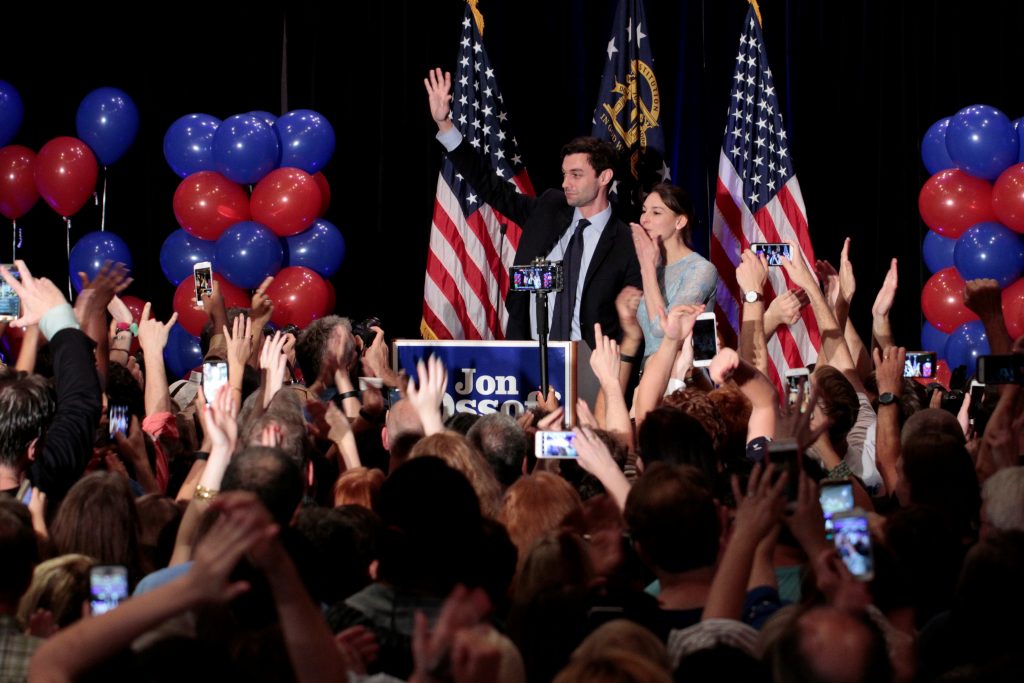 Jon Ossoff is joined by his finance, Alisha Kramer, as he addresses his supporters after his defeat in Georgia’s 6th Congressional District special election. Photo by Chris Aluka Berry/Reuters

People on both sides of the aisle like to blame gerrymandering for the dearth of swing seats in the House, and the rise of partisanship in recent decades. There are other factors at play, including the unprecedented influence of outside political groups in local races like the special election in Georgia. Nevertheless, the Democrats’ outcry over gerrymandered districts will grow louder in the wake of Ossoff’s loss.

Both parties have a stake in the redistricting debate. But Democrats, as the minority party in Congress, have more to lose in the short-term if the status quo doesn’t change. That’s why their hopes of flipping the House hinge in large part on redistricting reform — and why liberals should thank Obama and his ally and former attorney general Eric Holder for making redistricting their top political priority under Trump.

It won’t be easy. Republicans will fight reform efforts, and redistricting is a convoluted issue that doesn’t pull at voters’ heartstrings. Holder, the chairman of the National Democratic Redistricting Committee, acknowledged as much this week, saying that “part of my job is to make redistricting sexy.” The Supreme Court’s decision Tuesday to hear a case on partisan gerrymandering will help. As the Georgia election showed, Democrats have a lot riding on the outcome.

The Georgia election shattered spending records for a House race. Some $42 million was spent on television and radio advertisements alone. The overall cost of the race is expected to exceed $50 million. The previous record for a house race was $29 million.

All that spending likely had some impact on the race. Health and Human Services Secretary Tom Price won the seat by 23 points in 2016. Price vacated the seat to join Trump’s Cabinet this year. But it’s not clear exactly how much impact the money had in the end. If Democrats hadn’t poured so much money into the contest, would Ossoff have lost by as many points as Price’s opponent last year? Or would the race have been just as close, given the opposition on the left to Trump’s presidency?

It’s impossible to say. One thing is clear, though: the midterm elections next year aren’t going to be cheap. New spending records will be set, and voters in key swing states and districts will be besieged by T.V. ads and campaign literature. And when the polls close in November 2018, the 2020 election will kick off in earnest.