5 things to watch for as new Congress convenes

WASHINGTON — The new Congress convenes Tuesday with Republicans in control of the House and Senate as a formidable counterpoint to President Barack Obama in his final two years in office.

The GOP is intent on upending the president’s policies, including his 5-year-old health care law, his recent immigration actions sparing millions from deportation, and environment and business regulations. Unnerved by the prospect of a negotiated deal with Iran over its nuclear program, several Republicans, with some Democratic help, plan a pre-emptive strike of tough new sanctions on Tehran.

Obama has the power to veto legislation, an action he’s taken only twice in six years. Expect plenty more in the next 24 months in showdowns between the Democratic president and the GOP-led Congress.

Five things to know about the new Congress in the year ahead:

Gas prices and unemployment are down while economic growth and consumer confidence are up as a once-stagnant economy is humming. Will the so-called Obama recovery force a GOP Congress to recalibrate, abandoning the 2011 budget pact and its across-the-board spending cuts that took a significant chunk out of the deficit?

Even though the $483 billion deficit for 2014 was the smallest since President George W. Bush’s last full year in office, the GOP is determined to cut spending and rein in the reach of the federal government. Even the desire to secure more money for the military is unlikely to undo the reductions that will last through 2021.

“I’d like to have more money for defense,” incoming Senate Majority Leader Mitch McConnell, R-Ky., said in a recent interview with The Associated Press. “What I want is the overall cap to stay in place if possible. And it’s a challenge because to restore money on defense, the Democrats are going to want to restore money on the domestic side. So it’s a big challenge.”

The new committee chairmen in the House and Senate will use the annual spending bills to push for even deeper budget cuts. 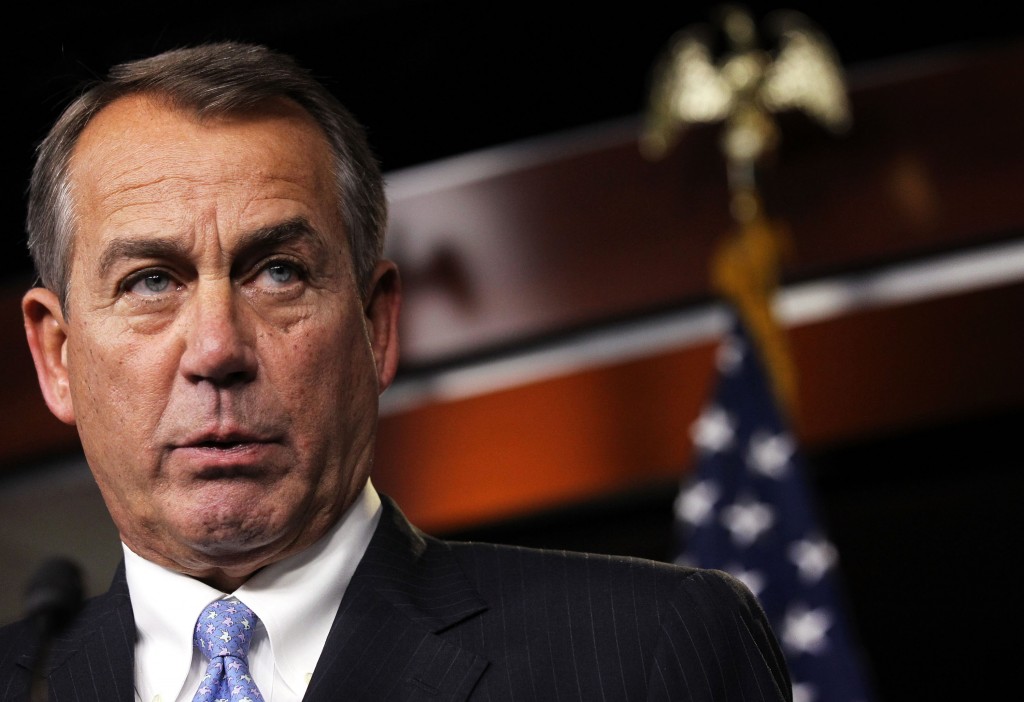 Will Speaker of the House John Boehner face competition for his leadership spot this term? Photo by Alex Wong/Getty Images

House Speaker John Boehner will have a commanding majority, the largest for the GOP in 84 years. A prolific fundraiser and relentless campaigner, Boehner helped elect 44 new Republicans, many of them business-oriented and more amenable to U.S. Chamber of Commerce priorities than to tea party goals.

That gives Boehner more room to maneuver in securing the necessary 218 votes to get legislation passed, out of the 246 seats the party will hold on Tuesday. But there are still at least a dozen rambunctious Republicans willing to challenge the leadership.

Texas Rep. Louis Gohmert, a tea partyer, has said he will challenge Boehner for speaker when the House votes for its leader on Tuesday. Another conservative, Florida Rep. Ted Yoho, is considering a long-shot challenge. Some 10 Republicans have said they won’t vote for Boehner, several citing frustration with last year’s spending bill and the inability to stop Obama on immigration.

Boehner’s backing of Rep. Steve Scalise, the House whip who admitted to speaking to a white supremacist group in 2002, helps the Ohio Republican with conservatives who have long considered Scalise their man in the leadership. In late December, Boehner moved swiftly to eliminate another distraction, convincing New York Rep. Michael Grimm to resign — effective Monday — after his guilty plea on a tax evasion charge.

With a heftier majority, Boehner is expected to secure the speakership despite the opposition.

Serving as majority leader is the realization of a long-sought goal for the 72-year-old McConnell, who captured his sixth term in November. He’ll have his work cut out for him managing a Republican caucus with disparate objectives.

Republican incumbents facing re-election in Democratic-leaning or swing states such as Illinois, Wisconsin, Ohio, Pennsylvania and New Hampshire will be pressing for an activist, pragmatic lineup of legislation to present to 2016 voters.

Republicans weighing a presidential bid such as Kentucky’s Rand Paul, Ted Cruz of Texas and Florida’s Marco Rubio will pursue opportunities to show their conservative creed to core primary and caucus voters.

Hard-charging freshmen who won handily in states such as Arkansas and Louisiana are certain to reflect constituents who have no interest in compromise with Obama.

McConnell, a seasoned dealmaker, managed to unite his caucus and work with Obama when his party was in the minority. The new Congress will test those skills under different dynamics.

The 2011 collapse of the grand bargain between Obama and Boehner on the budget burned both the White House and congressional Republicans.

Can this relationship be revived?

Liberal Democrats fear that Obama will cut deals with the GOP on trade, which McConnell has signaled is an issue on which working with the administration is possible.

Republicans who have accused Obama of being feckless in dealing with Syria, Islamic State militants and Iran will push for a more confrontational strategy.

Obama’s move to normalize relations with Cuba after a half-century of Cold War animosity roiled Congress. Republicans are divided over whether to push back and face pressure from businesses, ranging from hospitality to agriculture, to give them a chance to explore the untapped Cuban market.

Left: The House will welcome 58 freshmen this coming week, including 43 Republicans and 15 Democrats, while the Senate welcomes 13 new lawmakers, all but one of them Republican.