It’s over. The Senate has confirmed Neil Gorsuch to the Supreme Court on a largely party-line 54-45 vote, ending a months-long process marked by partisanship and a historic rule change that could have major implications for the future of the court. Now that the fight is finished — and Congress heads home for its Easter recess — here are some takeaways from the drama surrounding Gorsuch’s confirmation.

The standard for Supreme Court nominees is now undeniably political

Throughout its history, the Supreme Court always has been a red-hot political issue for the other two branches of government (google “FDR and Supreme Court” and “Nixon and Supreme Court”). But the Gorsuch nomination shows how profoundly the standard for judging SCOTUS nominees has shifted.

For nearly 40 years, the primary test for senators has been a Supreme Court nominee’s qualifications, character and past actions. That led to bipartisan support of justices from Antonin Scalia (98-0), whose seat Gorsuch will fill on the court, to Sonia Sotomayor (68-31). Those justices represented clear sides of the judicial spectrum, but were still supported by both parties because of their qualifications. This slide into politics arguably started with Justice Samuel Alito and continued with Justice Elena Kagan, both of whom received more partisan opposition than we’d seen in the past. It accelerated last year, when Senate Republicans refused to consider Merrick Garland, former President Barack Obama’s nominee to fill Scalia’s seat. Republicans defended the move; Democrats have decried it as a political power play, and a low point for the Senate.

But now, with Gorsuch, it is clear. Supreme Court nominations have become a sport measured as much by partisan philosophy as judicial merit.

Last weekend, a group of some 10 senators tried to avoid parliamentary bloodbath and find a compromise over Judge Gorsuch, senators involved in the talk told NewsHour and other media outlets.

Led by Sens. Susan Collins (R-Maine), and Chris Coons (D-Del), the senators from both parties generally agreed to some big terms: Democrats would move Gorsuch forward, in exchange for a promise from Republicans to hold off on changing the confirmation rules for a certain number of years.

But the deal fell apart, Coons said, in large part because Republicans wanted an exception for “extraordinary circumstances,” among other conditions. And Democrats simply did not trust Republicans to set a high enough bar for that. “We are in a moment of bad faith,” Coons said, noting that every Democrat feels Republicans acted in bad faith by blocking Garland and nearly every Republican feels the same about how Democrats almost universally have opposed Gorsuch.

Conclusion: For nearly 20 years, razor-sharp politics and ever increasing campaign money battles were the prime forces causing Washington gridlock. Now, add to that, a deep and growing mistrust. 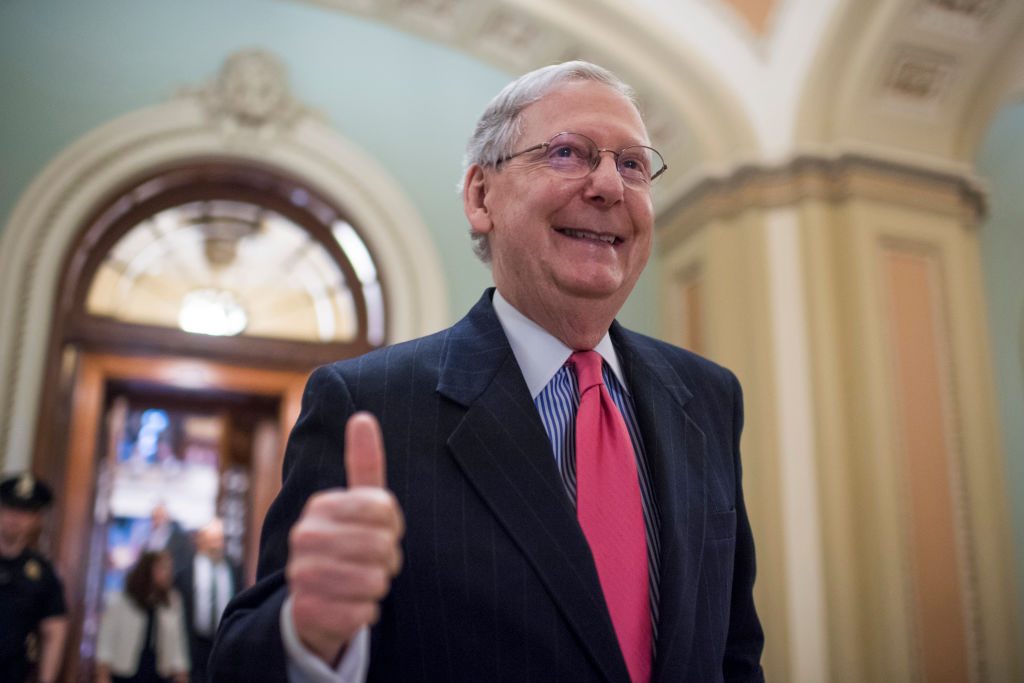 Precedents still matter in the Senate. And the new key precedent is 2013

Leading up to the decision to “go nuclear” and alter how the rules work for Supreme Court nominations, we heard many lawmakers speak about what a sad day it was going to be in the Senate. But the truth is, the 2017 drama was barely a shadow of the intense emotion and electric divide of 2013, when Democrats first launched the “nuclear option” to get through a backlog of lower court and other presidential nominations.

The Senate remains a place of precedent. Which is why, technically, Republicans did not alter the words in the rules this week — they just changed the precedent for how the rules work. Now we’ll watch if any more precedents change.

The GOP has its first major accomplishment since Trump took office

It’s been a rocky first few months in power for President Donald Trump and the GOP-controlled Congress. The president’s travel bans have been blocked in court. Several high-profile investigations are underway into Russia’s interference in the 2016 election and its possible ties to Trump campaign associates. And House Republicans failed to pass a bill that aimed to repeal and replace the Affordable Care Act, dealing the party an embarrassing setback. This is not the start Republicans had hoped for in January, as they gained control of both chambers of Congress and the White House.

So Gorsuch’s confirmation was a much-needed win for the GOP, even if the confirmation process was ugly and controversial. Much of the attention now is on the “nuclear option.” That will always be a footnote to Gorsuch’s confirmation. But the focus on Senate rules will fade. What matters to Republicans and their base is getting a conservative judge on the court. Trump promised to do that if he won the election. With Gorsuch’s confirmation, Trump delivered. Whatever else happens on issues like immigration and health care — not to mention foreign policy — placing a justice (or possibly multiple justices) on the Supreme Court will be a major part of Trump’s legacy.

Gorsuch’s confirmation also brings short-term advantages. Gorsuch won’t change the balance of power on the court, but he does shore up its conservative wing. That will matter if cases on Trump’s orders on immigration and other policies come before the court in the next few years.

Neil Gorsuch is 49. When Chief Justice John Roberts joined the court in 2005 he was 50. Justice Samuel Alito was 55 when he was confirmed the next year. Roberts and Alito are now in their sixties, but they could remain on the court for another two decades, if not longer. Gorsuch joins them as the court’s third relatively young conservative justice, forming a formidable group that could have a huge influence on American law for years to come.

Former President Barack Obama’s two Supreme Court appointments were also on the younger side. Justice Sotomayor was 55 when she joined the court in 2009, and Justice Kagan was 50 when she was confirmed in 2010. But with the addition of Gorsuch, the court’s conservative wing is now younger than the liberal wing. If Trump adds a fourth justice who is 60 or younger, that could tilt the balance of power for a very long time.