5 Things You Should Know About E-Verify 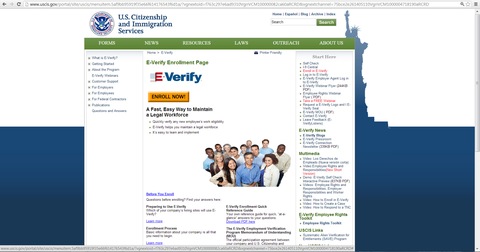 Functioning as a pilot program up until now, the federal database program E-Verify is set for some changes under a sweeping Senate immigration bill.

E-Verify — an electronic program run by the U.S. Department of Homeland Security contrived to help businesses filter out undocumented immigrants from their pool of new hires — has garnered renewed attention in recent weeks as the Senate debates a comprehensive immigration reform bill.

1. An Internet-based system that compares information from an employee’s Form I-9, Employment Eligibility Verification, to data from U.S. Department of Homeland Security and Social Security Administration records to confirm employment eligibility. (U.S. Citizenship and Immigration Services)

The program started in 1996 with the Illegal Immigration Reform and Immigrant Responsibility Act. Employers can submit information from a potential employee’s Employment Eligibility Verification Form, or I-9, through this multi-step process online, and the Social Security Administration and the USCIS will match it to government records and decipher whether the employee can work legally in the U.S.

On Tuesday’s NewsHour, we’ll talk to Mark Krikorian, executive director of the Center for Immigration Studies, and Christopher Calabrese, legislative counsel for the American Civil Liberties Union, for two points of view on the federal database’s potential future under new legislation.

Under Current Law, the Program Is Voluntary in Most States

“E-Verify today is largely a volunteer system where employers can check the employment status of workers after they have hired them as part of the I-9 process,” Calabrese told the NewsHour. “It’s mandatory for federal contractors and in some states, and it’s also mandatory for most government workers.”

The program, while still voluntary, receives typically high marks for its usability, according to Calabrese, but its error rate is difficult to discern. The program, he said, currently skews to larger employers who can handle the processes with a how-to-manual spanning 80-pages.

Krikorian, a critic of the bill’s architecture, told the NewsHour:

The point of E-Verify is to enable legitimate employers to know whether their employees are liars or not. Without it, if you give an employer an ID with a picture of Mickey Mouse and any combination of numbers in a 9-digit number, you can probably get hired .. In concept, electronic employment verification is one of the most important goals of immigration control. You can’t have immigration control in a modern society without it.

The USCS website notes that “U.S. law requires companies to employ only individuals who may legally work in the United States — either U.S. citizens, or foreign citizens who have the necessary authorization,” and that diverse strength on the economy “also attracts unauthorized employment.”

The program as it stands now looks like this — with both a step-by-step process on how an employer and employee completes an I-9 form, as well as a self-check process where individuals can check their authorization status themselves: 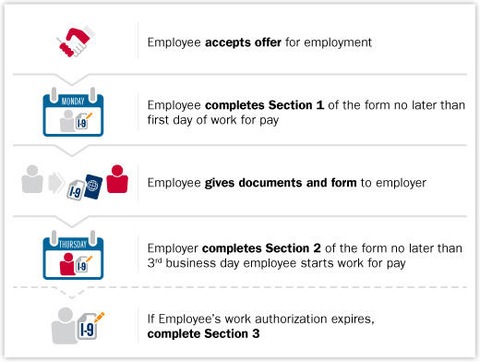 Under the Senate Bill, Many Expect Mandatory Electronic Employment Verification

As part of the I-9 process, Calabrese laid out this potential process that would be mandatory for all employers within five years of passage:

The process, according to Calabrese, is not supposed to be a pre-screening system for potential hires. In fact, he said, if employers follow the procedural rules, “You’re not supposed to do E-Verify until after you’ve hired someone.”

In an interview with The Washington Examiner, Sen. Marco Rubio, R-Fla., a member of the bipartisan group that drafted the legislation, reiterated a position he flagged on a Sunday show — that strengthening the border security provisions of the bill was key.

Add ‘Biometrics’ to Your Vocabulary

A flashpoint in the current Senate bill, biometrics is a branch of biology in which human characteristics are translated into statistical data.

“It can include pictures, fingerprints, iris scans and even elements like how an individual walks,” according to Calabrese.

Last week, Sen. John Cornyn, R-Texas, proposed an amendment he calls the RESULTS Act: “Requiring Enforcement, Security and Safety, & Upgrading Legitimate Trade and Travel Simultaneously.” The provision stipulates a number of proposals. Among them is a fully operational E-Verify system and a biometric exit system in which U.S. Customs and Border Protection would track immigrants leaving the U.S. at all U.S. international airports and seaports.

In addition to an exit system, the Senate bill, Calabrese said, “encourages every state to provide a driver’s license photo to a Department of Homeland Security.”

And although Cornyn’s amendment would require biometric data, Krikorian said the bill, amended by the Senate in late May to include a fingerprinting system, “would only require a biographic exit to prove that it was you.”

Bipartisanship Aside, the Program Has Critics

For those Americans who are authorized to work in the U.S., critics say the impending legislation could lead to substantial headaches from unintended consequences. A USCIS study of the program, using 2009 data, found that 0.3 percent of applicants received tentative nonconfirmations (TNC) that were erroneous but ultimately corrected.

Resources for Employers and Employees Are Extensive

For more on E-Verify and what is proposed in the Senate immigration bill, visit our Immigration page and watch Tuesday’s PBS NewsHour.