How and why you should record the police

In the days after police officer Michael Slager shot and killed a suspect in North Charleston, S.C., he maintained that he was justified in his use of force.

Then, a video emerged that changed everything.

According to an initial statement from the North Charleston police department, the suspect, Walter Scott, had fought with Slager over control of a Taser. Slager, fearing for his life, employed lethal force.

But cell phone footage appears to show Slager shooting Scott in the back eight times from a distance of several yards.

On Tuesday, Slager was indicted on murder charges.

“All citizens should be in the habit of documenting the public work of police in public places.” — Mary Angela Bock, journalism professor
That a bystander’s grainy cell phone video caused such a dramatic shift in the official account speaks to new possibilities for police-citizen interactions in the digital age.

“We’re living in a time of a technology revolution,” said Jay Stanley, a senior policy analyst with the Speech, Privacy and Technology Project at the ACLU, who wrote a photographers’ guide to recording police activity. “Cameras are being spread more and more throughout our living spaces and our community spaces which will have far reaching social effects, and one of the first areas we’re seeing it is policing.”

Broadly speaking, it is always legal to record the police in public places or when they are on-duty, so long as the witness does not interfere with police proceedings. And the proliferation of smart phones and social media has made citizen monitoring of police activity easy: people carry high-quality photo and video technology in their pockets, and can share their records almost instantaneously.

What’s more, mobile phones apps now exist specifically to record interactions with the police. Different ACLU state offices have apps that record video and immediately back them up to a server, so records aren’t lost if a phone is lost or destroyed.

The existence of this kind of record shifts the conversation, said Lumumba Bandele, Senior Community Organizer at the NAACP Legal Defense Fund and a co-founder of a Brooklyn-based grassroots cop watch program.

“Before the knowledge of this tape [of Walter Scott], the police account was totally different. Now that it’s present, we can see what would have been presented and likely accepted as the narrative.”

But civilians should not only record law enforcement while a serious incident is occurring, said Mary Angela Bock, an Assistant Professor at the University of Texas at Austin School of Journalism who researches photojournalism practice and ethics.

“All citizens should be in the habit of documenting the public work of police in public places,” she said, “It shouldn’t be only in times of crisis, and not just people in groups that are marginalized in society. Everyone needs to make it a respectful habit.”

So what should this kind of civilian monitoring look like? Simple, said Bock: “It would look like journalism.”

Documenting public officials at work, she said, is what journalists do every day.

“Now that everybody can be a journalist, everybody needs to learn the ethics and think like one,” Bock said.

Should you find yourself in the position to be a citizen journalist, heed these tips from Bock and the ACLU’s Stanley:

Maintain your right to record. Police do not have the right to take your phone if you’re not committing a crime, and they need a warrant to search it. In Sharp v. Baltimore City Police Department, the court ruled that the public has the right to videotape or photograph public police activity in public places.

Capture as much information as you can. The video out of North Charleston was powerful because it was a wide shot, said Bock. “The person who was taping that was far enough away to not get involved, but close enough to see what happened.” Moreover, the video was released as one continuous shot, which makes the timing look more faithful. Context is critical to capturing as full a story as possible.

Be respectful. You legally may not interfere with police procedure, and you should not be argumentative or aggressive, said Bock. Instead, she recommends, a civilian monitor should maintain a distance and remind the officer of their rights: “I’m a member of the public, I’m in a public space, you’re doing public work, and I’m just documenting what’s going on.”

If you are stopped, ask to leave. You cannot be detained without reasonable suspicion that you have committed, or are about to commit, a crime. If you ask to leave and are denied, this constitutes unlawful detention. 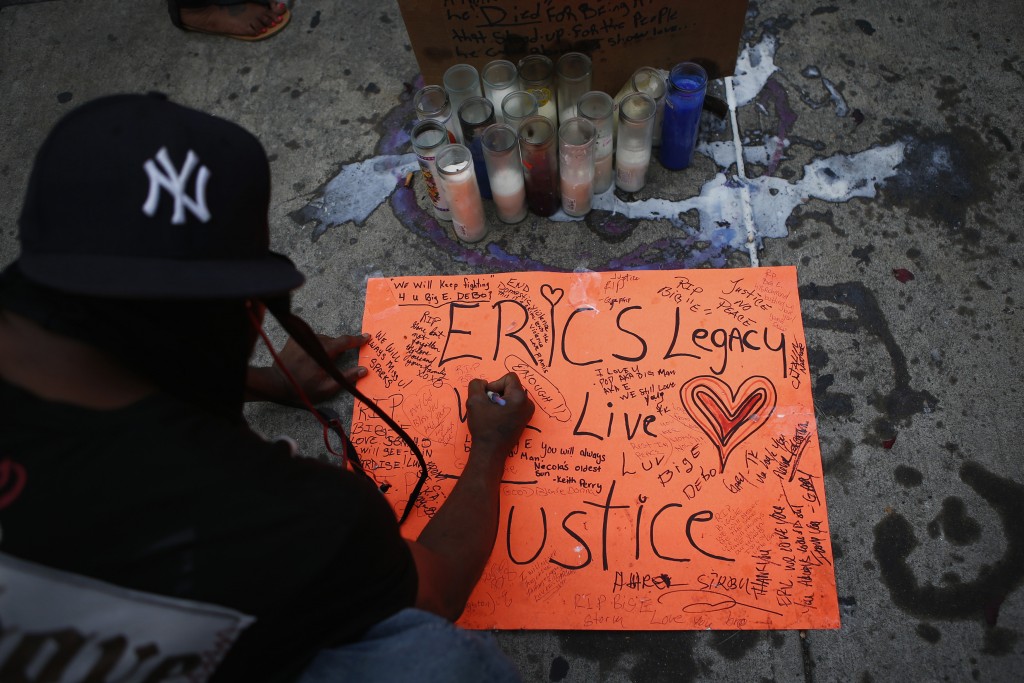 A man pays respect at the site where Eric Garner died after New York police put him in a chokehold in July in Staten Island, New York. Photo by Eduardo Munoz/Reuters

Remember that a video is not the be-all-end-all. Both Bandele and Stanley point to the story of Eric Garner, whose choking death while in police custody was recorded and viewed widely, as evidence that a video may be just one part of an overall justice process. In Garner’s case, the officer’s use of force was deemed justified, and he was not indicted. Video technology “is neither a silver bullet nor useless,” said Stanley. “Cameras aren’t going to solve every problem in our criminal justice system, but sometimes they can reveal those problems.”

Left: North Charleston police officer Michael Slager, right, is seen allegedly shooting 50-year-old Walter Scott in the back as he runs away, in this still image from a bystander's video in North Charleston, South Carolina, taken April 4, 2015. Handout photo via Reuters