President Obama sat down with PBS NewsHour’s Judy Woodruff and Gwen Ifill for an exclusive interview in the Blue Room of the White House. Photo courtesy of White House.

On Wednesday, President Barack Obama gave an exclusive interview to Gwen Ifill and Judy Woodruff. During the conversation, he told Ifill and Woodruff that he had “not made a decision” on his course of action on Syria. He concluded that the Syrian government had carried out attacks with chemical weapons and that there are “international consequences” for those actions.

In all, the president spoke on Syria for about eight minutes. But there were several more attention-worthy moments during the other 19 minutes of the interview. Here are some highlights and some of the events surrounding their discussion:

1. Was the toll of the Arab Spring underestimated?

I think we anticipated this would be a really difficult process. I mean, you’ve got a region that, for decades, has basically been under autocratic rule. And people have been suppressed, and there were no traditions of civil society. There were no traditions of political freedom. And then suddenly, folks are allowed to express themselves, but a lot of their organizing principles end up being around extremist agendas, in some cases; more moderate forces sometimes haven’t get got their act together. So we anticipated that this was going to be a very difficult path. We’re not surprised by that.

2. What was the importance of the March on Washington?

… the capacity for ordinary people, for citizens, to change structures of oppression that had been in place for for decades and to do it peacefully. It not only gives you a sense of the power of individuals, but it also said something about the power of America to transform itself.

3. How will the president “make up” for the Voting Rights Act decision?

… if we can go ahead and move administratively so that our attorney general can go ahead in jurisdictions that seem to be intent on preventing people from voting and that have a racial element to it, even though largely it’s probably for partisan reasons, then we need to go ahead and enforce the law.

4. On the importance of early childhood education

I want to get early childhood education done because we know that’s the single most important thing we can do to increase upward mobility and opportunity for disadvantaged kids.

5. On whether he is the victim of “partisan racial gridlock”

There’s a line that’s drawn between the deserving poor and the undeserving poor. I think that has been fairly explicit in politics in this country for some time. It’s directed at Bill Clinton or Nancy Pelosi just as much as it’s directed at me. I think it doesn’t have to do with my race in particular.

6. Are there things the president can do to regain American’s trust in government?

I think there are. I’m an eternal optimist.

7. Inside the NewsHour, you missed everyone in the control room excitedly waiting for Ifill and Woodruff to start their first major interview together as co-anchors. 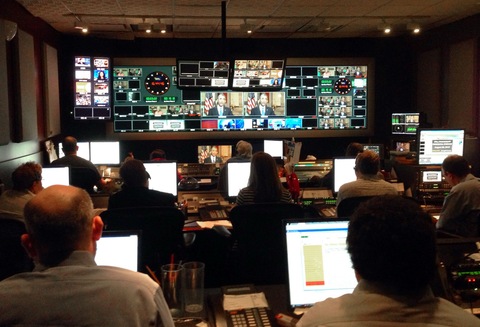 What did you think of President Barack Obama’s interview with Woodruff and Ifill? Tell us in the comments below.