A high-profile special election in Ohio was too close to call Tuesday, highlighting a night of competitive primary races across the country. With the Ohio congressional race still in limbo, here are top takeaways from Tuesday’s primaries.

Too close to call

In the most buzzed about contest of the night, Republican state Sen.Troy Balderson leads Democrat Danny O’Connor by less than one percent in Ohio’s 12th Congressional District. That’s less than 2,000 votes.

In the 10 special elections since President Donald Trump was elected in November 2016, Democrats have only managed to flip two seats: Pennsylvania’s 18th Congressional District and the U.S. Senate seat in Alabama. O’Connor appears likely to have fallen short, but the Democratic Party will spin it as a win given the district’s Republican leanings. Trump won the district by 11 percent in 2016, and it has been held by a Republican since 1983. Balderson may be heading to Washington soon, but he’ll face off against O’Connor again in November’s general election.

Can Kobach eek out a primary win in Kansas?

In solidly red Kansas, the result of the Republican primary for governor remains up in the air. Republican Gov. Jeff Colyer, who assumed office this year when Sam Brownback joined the Trump administration, is neck and neck with Kansas Secretary of State Kris Kobach. Colyer was endorsed by former Kansas Sen. Bob Dole, a popular figure in the state, but Kobach received President Donald Trump’s support. 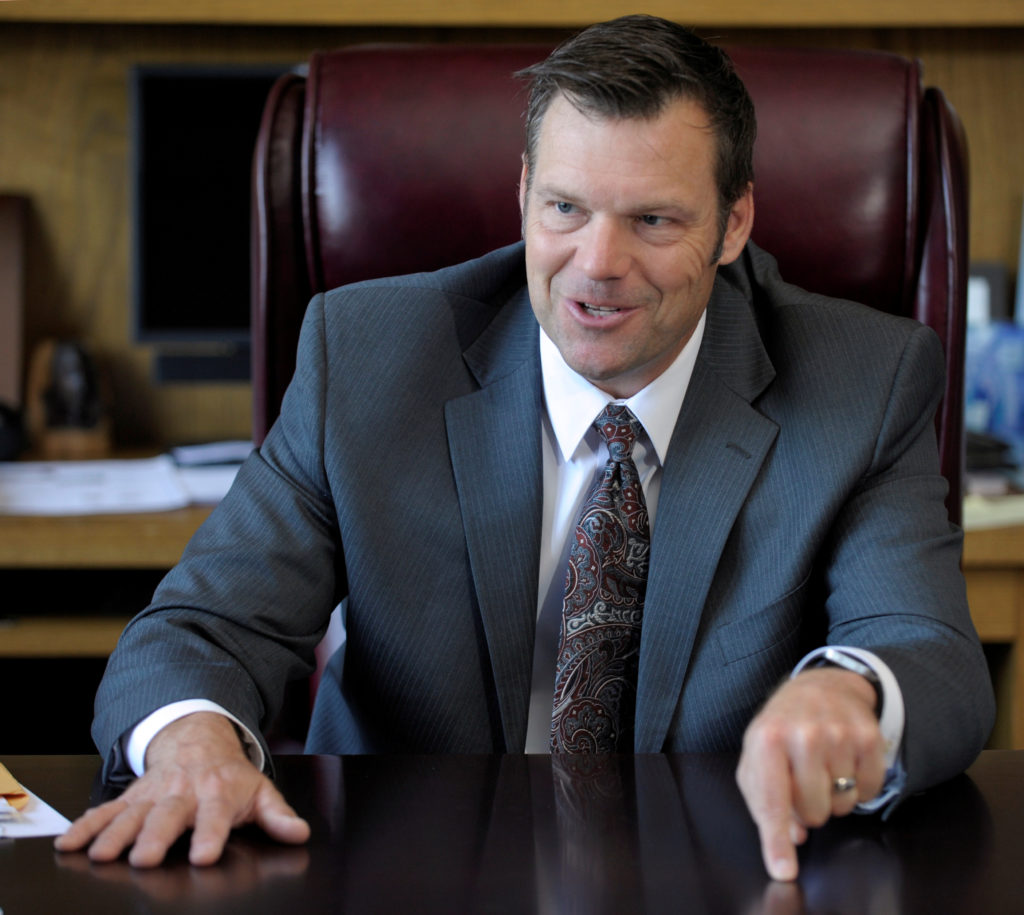 Colyer, a doctor who has served in the state legislature and as lieutenant governor, is a lesser known figure nationally. Kobach has gained national recognition for his hard-line views on immigration and work running Trump’s voter fraud commission. Kobach is currently leading Colyer by two-tenths of one percent, so it’s too early to tell whether the establishment figure or more conservative pick will win out.

Will the blue wave hit Michigan?

Hillary Clinton supporters considered Michigan part of the Democratic Party’s so-called “blue wall” in 2016, but Trump shattered that assumption by winning the state, (along with Wisconsin and a near-win in nearby Minnesota). This year, Democrats hope to regain momentum in Michigan by picking up some of the 9 Republican-controlled House seats in the state.

Whitmer would be only the second woman in Michigan’s history to serve as governor.

Elsewhere, the matchup is set in the race to replace Republican Gov. Rick Snyder. Snyder led the state during the Flint water crisis and is one of the most unpopular governors in the country. Former county prosecutor and Democrat Gretchen Whitmer will face the state’s Republican Attorney General Bill Schuette in the general election, after both won their primaries Tuesday. Schuette has been endorsed by Trump, which could help shore up support among Republicans. Whitmer would be only the second woman in Michigan’s history to serve as governor.

Sen. Claire McCaskill, D-Mo., will officially face Missouri’s Republican Attorney General Josh Hawley in November in what could be one of the year’s closest Senate races. The race will likely center on McCaskill’s vote this fall on Supreme Court nominee Brett Kavanaugh. Before any primary votes were cast, Hawley criticized McCaskill for listening to her party leaders over Missourians, and took out an ad suggesting she would vote against Kavanaugh. McCaskill is one of 10 Democratic senators running for re-election this year in a state that Donald Trump won in 2016, and her Supreme Court decision could be a deciding factor for voters in the general election.

Voters in Missouri also handily rejected a ballot measure that would keep in place the so-called right-to-work law. Under that law, private sector employees in unionized workplaces do not have to join the union or pay a fee. Like Wisconsin, Missouri is a Midwest state with a Republican legislature and governor. But unlike in Wisconsin, Missouri voters sided with the unions Tuesday. This is a big win for the labor movement. 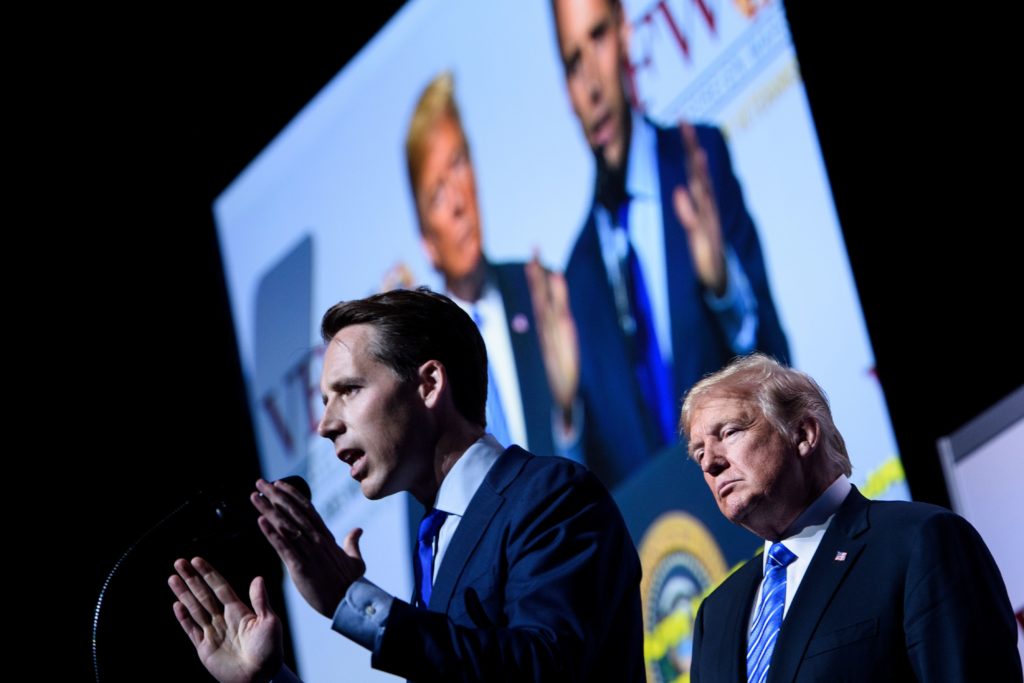 It was a decent night for politicians who got Trump’s stamp of approval. In Michigan, Trump-endorsed candidates Schuette and John James won their Republican primaries for governor and Senate, respectively. And Hawley, who Trump held a rally for in Missouri recently, easily won his primary in Missouri. Trump took credit for the result in the Ohio special election, tweeting, “When I decided to go to Ohio for Troy Balderson, he was down in early voting 64 to 36. That was not good. After my speech on Saturday night, there was a big turn for the better.” In the too-close-to-call Kansas governor’s race, Trump sent out a late endorsement of Kobach. We’ll see if the president’s praise can get Kobach over the hump.

A bad night for Bernie Sanders

Sen. Bernie Sanders, I-Vt., has been using the midterms to back a slate of candidates that are on the more progressive end of the Democratic Party. But Tuesday, the candidates he backed in the Michigan governor’s race and a House race in Missouri came up short. Abdul El-Sayed lost his primary to the more moderate Whitmer in Michigan, and Cori Bush didn’t come close to unseating incumbent Democratic Rep. William Lacy Clay in Missouri.

The state of Washington could get even bluer come November. Republicans have a tough fight to defend two seats in the state this cycle, and we got a preview of that in last night’s primaries, which follow a top-two format where the two leading primary vote getters move on to the general, regardless of party.

First, a member of Republican leadership is in a surprisingly close race to keep her job. Votes are still being counted, but GOP Rep. Cathy McMorris Rodgers only leads her Democratic challenger by less than half a percent. Democrats are also trying to pick up a seat held by retiring Rep. Dave Reichert, a moderate Republican in a district Clinton won by 3 percent. The district has been held by a Republican since it was created in 1983. Votes are still being counted, but a Democrat will make the cut off to face Republican former state Sen. Dino Rossi in November.