This Valentine’s Day might not be very romantic for former Virginia Gov. Bob McDonnell and his wife of 39 years. While McDonnell awaits an appeal to his two-year prison sentence for public corruption, wife Maureen is days from being sentenced on her own corruption charges.

From China’s Communist leadership to Kentucky’s House delegation, daring political couples have sometimes used power as currency to buy silence, luxury and influence for others. Watch out Frank and Claire Underwood: You’ve got nothing on these eight pairs. 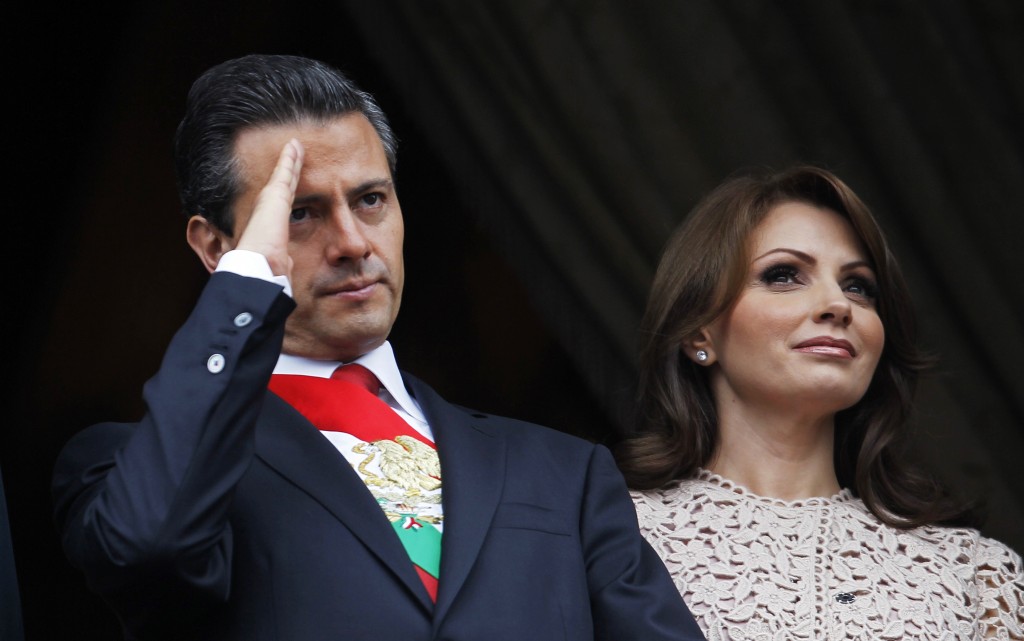 Mexico’s President Enrique Pena Nieto and first lady Angelica Rivera have come under heat after the purchase of a lavish home from a businessman who has several contracts with the Mexican government. Photo by Edgard Garrido/Reuters

Mexico’s President Enrique Peña Nieto made headlines in early February when he ordered an investigation into his own home purchases, along with those of his wife and Finance Minister Luis Videgaray Caso. All three had purchased homes from companies owned by businessman Juan Armando Hinojosa, whose companies have been awarded numerous hefty government contracts during Peña Nieto’s presidency, as well as during his time as governor of the State of Mexico.

Peña Nieto’s wife, the popular telenovela actress Angelica Rivera, was the first to draw criticism for her purchase of a mansion owned by the Hinojosa-headed company Grupo Higa. At the time, the Guardian reported that the seven-bedroom home contained a spa, marble floors and an elevator. Rivera insisted that she used her own money to buy the property. However, evidence suggests the house was built specifically for the first family. In a 2013 interview, the architect who designed the home even described working with the president directly.

Rivera ultimately sold the house, but this did little to silence critics, especially after it emerged that Peña Nieto’s 2012 presidential campaign operated out of a home owned by another of Hinojosa’s companies, which the then-candidate used rent-free. Videgaray also purchased a house from one of Hinojosa’s companies prior to his appointment as finance minister. Peña Nieto’s critics are now saying the president did not go far enough in ordering an investigation; they argue the probe should be conducted independently. 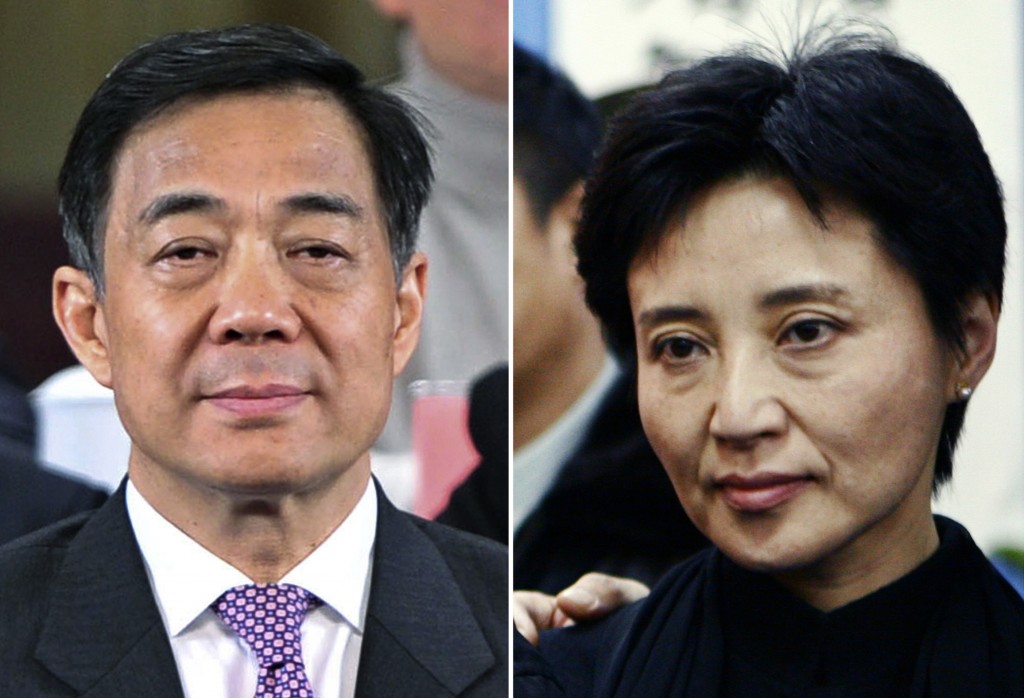 Bo Xilai was a rising star in China’s Communist party when he was convicted of embezzlement and abuse of power in 2013. A year earlier, his wife Gu Kailai was convicted of murdering a British businessman. Photo by Reuters

The son of a Red Army commander, Bo Xilai was a modern day Chinese aristocrat and a natural “rising star” in the Communist Party in the early 2000s. Was, until he was exposed for taking more than $3 million in bribes, embezzlement and general abuse of power. In his attempts to “rally a popular following,” Bo threatened top Communist Party leadership, Orville Schell told PBS NewsHour’s Hari Sreenivasan. Even so, his downfall was “sublimely embarrassing” for the Party, given his father’s legacy. He was stripped of all titles before entering prison for life in 2013.

His wife also made headlines. In 2012, Gu Kailai was convicted of murdering a British businessman, presumably to shield her husband’s crimes, though she contests that Neil Heywood threatened her son because of a business dispute with her husband. Gu’s death sentence was suspended, which could mean a lifetime in jail.

The demise of British power couple Chris Huhne — who was energy secretary and a member of Parliament — and Vicky Pryce — a world-renowned economist — can be traced back to a speeding ticket. When Huhne’s car was clocked speeding on the M11 motorway outside of London in 2003, he had already racked up nine points on his license. If he were to accept the points for the offense, his license would be revoked, so his wife signed the paperwork saying she was behind the wheel.

In June 2010, Huhne left Pryce, as news hit the tabloids that he was cheating on her with his public relations advisor. And Pryce decided to seek revenge.

She revealed to newspapers that she took points on her own driver’s license for her husband’s reckless driving. Although she never denied her illegal actions, she claimed “marital coercion,” hoping to implicate Huhne and avoid jail time herself. On the first day of his trial, Huhne plead guilty and resigned from his position as an MP. But Pryce’s plan began to unravel. Her first trial failed to reach a decision. In the retrial, she was convicted of perverting the course of justice.

Not one to sit idle, even behind bars, Pryce used personal narratives from her two-month stay in prison as part of her book “Prisonomics,” which examines the economic cost of women’s’ prisons in England. 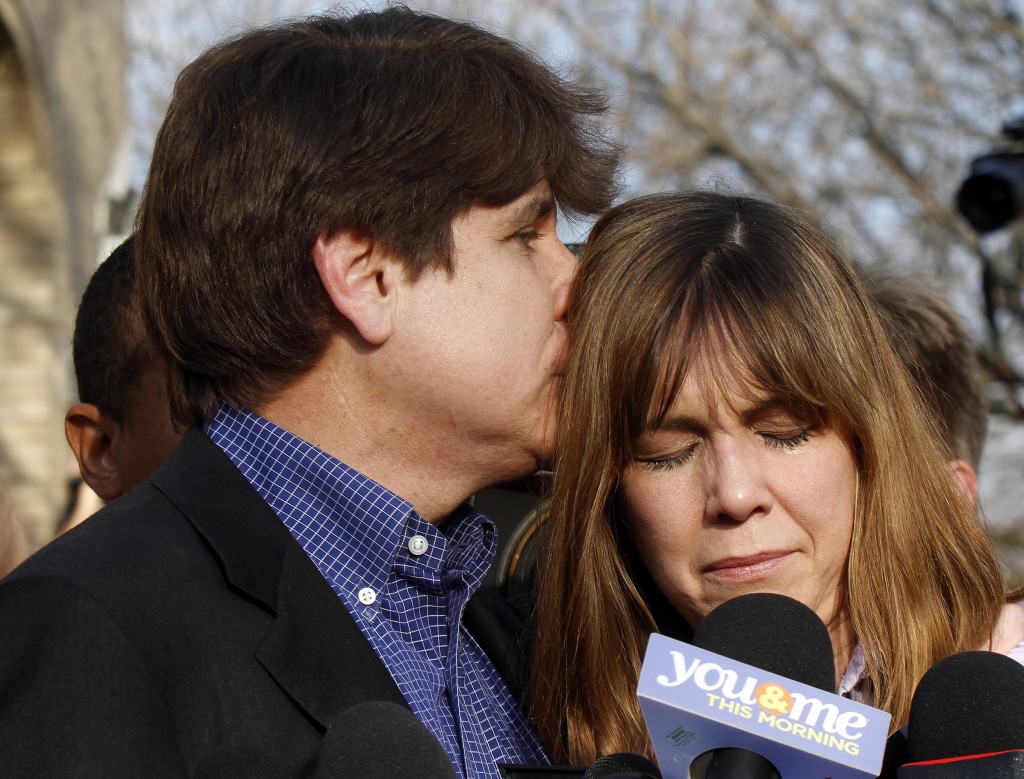 In the afterglow of the 2008 presidential election, Illinois Gov. Rod Blagojevich was tasked with appointing a replacement to fill the Senate seat vacated by President-elect Barack Obama. A month after the election, Blagojevich was arrested by federal agents for attempting to sell Obama’s seat.

Secretly taped conversations reveal that he considered appointing Oprah Winfrey, due to her perceived influence on the 2008 election. In transcripts of the tapes, Blagojevich says, “Oprah, by the way, is not far-fetched… She’s up there so high, no one can assail this pick.” In his most damning soundbite, the former governor said, “I’ve got this thing [Senate seat], and it’s [expletive] golden. And I’m just not giving it up for [expletive] nothing.”

According to the Chicago Tribune, Patti Blagojevich, a former real estate agent, came under heat after allegations that she took commissions from state contractors and political supporters of her husband. Although these allegations never launched an in-depth investigation, she soon lost her six-figure fundraising job.

Between his arrest and sentencing, the Blagojevichs each appeared on a reality television show (him: “Celebrity Apprentice;” her: “I’m a Celebrity… Get Me Out of Here!”), Rod penned his memoir and they appeared on numerous TV talk shows.

Rod was eventually sentenced to 14 years in a federal prison for 17 counts of corruption. That didn’t stop Rod from going out in style. He hosted a motley farewell party, complete with camera crews, and signed autographs as his wife and young daughters waited inside their home. Throughout the entire ordeal, the Blagojevichs have maintained their innocence.

Rod is far from the only Illinois governor to end up behind bars; out of the last seven governors, four have spent time in prison.

In a 1992 banking scandal, the U.S. House of Representatives allowed members to overdraw their checking accounts and leave payments overdue for months. Kentucky’s Rep. Carroll Hubbard Jr. was charged for conspiring to file false campaign finance reports, misusing government employees and obstructing justice. He pled guilty to the three felonies and paid hundreds of thousands of dollars in restitution. He was also exposed for attempting to funnel money to his wife Carol’s 1992 congressional run in another district. When she was revealed as part of the larger picture, she was placed on probation, given a hefty fine and given community service for misusing congressional aids. The Hubbards divorced soon after. Former Rep. Carroll Hubbard ran in the 2006 and 2008 Democratic primaries for the Senate in Kentucky.

Rep. “Pork Barrel John” Langley had been convicted of violating the Prohibition Act when he ran for and won re-election in 1924, while his conviction was being appealed. He served in the 69th Congress until 1926, when his appeal was denied and he was sentenced to two years in a federal penitentiary.

When Langley’s wife, Katherine, campaigned to fill her husband’s seat, she did so on the platform that a vote for her was a vote for her husband’s innocence. The tactic paid off and she became one of the first women elected to Congress. She won re-election in 1928, the same year that John Langley, who had been paroled the year prior, was officially pardoned by President Calvin Coolidge. The pardon was rumored to have come with an understanding that Langley would not run for office again. However, as Kentucky state historian James C. Klotter explains, “That’s an unwritten rule, so he can go back into politics, and he is apparently is sending out feelers as soon as he gets out of jail.”

Langley’s plans were stopped not by the President but by his own wife, who refused to step aside. There was “some friction in the marriage,” Klotter said, “because he wants to go back to Congress, she doesn’t want to step down. And she stays in Congress, and he doesn’t run.”

Klotter speculates that Katherine was ambitious in her own right, and that her initial campaign to vindicate her husband was more of a means to an end. “Her second election would not have been a vindication because he’s already out by that time,” Klotter points out. “I think that’s what’s important about her. She did win an election, not on her husband’s coat tails, but on her own strengths.”

How did John and Katherine’s dueling ambitions affect the marriage? “They stayed married the whole rest of their lives,” said Klotter. 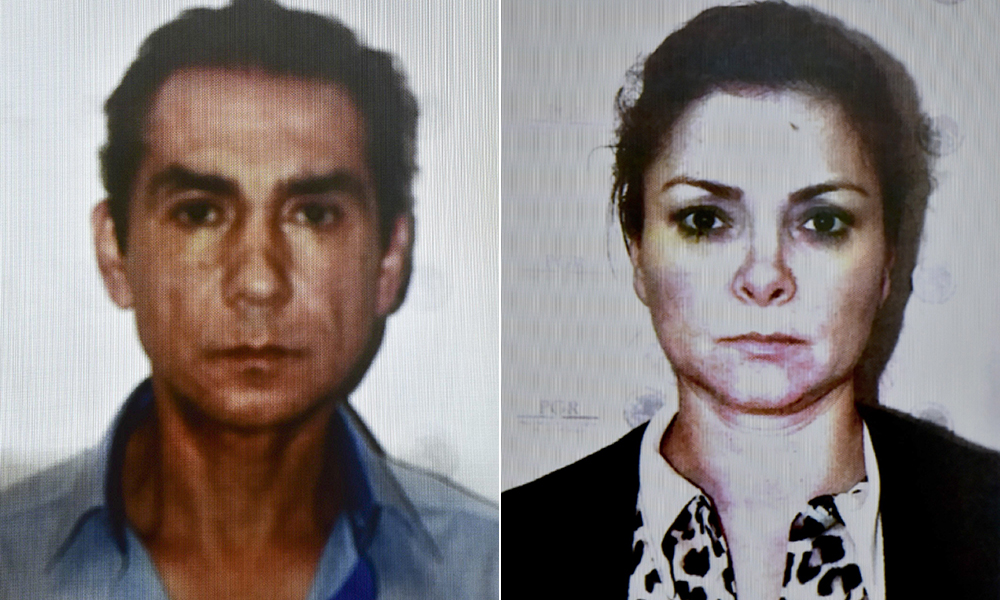 In September, 43 students from Ayotzinapa, Mexico, disappeared en route to a political rally to protest the government’s hiring and funding practices. They planned to protest at a conference hosted by Maria de los Angeles Pineda, the wife of Iguala Mayor Jose Luis Abarca. The students were last seen being led away by local police, and Abarca and his wife took a leave of absence soon after. The federal government eventually pinned the students’ abduction on the mayor and his wife. Why? Local authorities say the students planned to interrupt Pineda’s speech at her conference.

One month after Abarca and Pineda fled, they were found hiding in an abandoned house in Mexico City, and were arrested by federal police. While many bodies have been found in mass graves, not all of them have been linked to the abductions and only one body has been identified as a missing Iguala student. 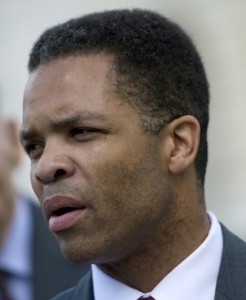 Jesse Jackson Jr. and Sandi Jackson were a Chicago political power couple. Jesse, son of prominent civil rights activist Rev. Jesse Jackson, was elected to the House of Representatives in 1994. He served four terms as an Illinois congressman. Sandi Jackson, a powerhouse in her own right, became the alderwoman of Chicago’s 7th ward in 2007. She previously served as deputy political director of training for the Democratic National Committee and was a Clinton administration appointee.

But in February 2013, Jesse pled guilty to using $750,000 of campaign funds on personal use. Sandi admitted to filing false tax returns. Using campaign funds, the couple had illegally purchased a Rolex watch, memorabilia from Michael Jackson and Bruce Lee, a football signed by American presidents, as well as fur coats, among other luxury goods.

Jackson was sentenced to 30 months in prison. After resigning as alderwoman, Sandi received a one-year jail sentence. A judge allowed the sentences to be staggered so that one parent could always be home with their young children, Jessica and Jesse III.